Windeyer is a genuinely fascinating remnant of an old goldmining town which is now a tranquil, if sprawling, rural hamlet of less than 100 people in the Meroo River Valley. There are now only five places of historic interest. Many of the original buildings have been removed and the spread of the original town (over some kilometres - it was six separate settlements) means that the visitor looks at isolated buildings rather than some kind of coherent historic village. It was essentially a "tent city" in its heyday - at one time it was reputed to be the largest goldmining community in New South Wales - and when the prospectors moved on, they took their tents with them. The setting beside the river is beautiful and the minimalism of the modern "village" is a reminder of the transient nature of mining towns.

Windeyer is located 266 km north-west of Sydney via the Great Western Highway and Castlereagh Highway. It is 43 km south-west of Mudgee.

Windeyer was originally known as Richardsons Point. When gold was discovered in the area it was gazetted as the village of Windeyer in 1859. It is likely that the settlement was named after either Charles Windeyer, a prominent Sydney magistrate, or Richard Windeyer (1806-1847), a barrister and politician.

Exploring Windeyer
It is hard to imagine that there was a time when Windeyer was a booming gold mining town - "a tent city" with eight inns, three stores and a collection of stringybark huts and tents. Now it is just a few houses and properties spread across a vast area. There are really only five places of interest that are worth exploring. If you take the road from Mudgee the places of interest are very obvious as you drive through the town:

Windeyer Cemetery
Just across the bridge over the Meroo River, and down a gravel road from the Police Station, is Windeyer Cemetery which was established in 1856. The front section is more contemporary but down the back are a number of graves which date from the time when the town was a booming goldrush tent city.

Police Station and Lockup
One of the few solid buildings in the town, and just over the Meroo River bridge, is an old brick building which started life as the Oriental Bank. It became the police station and lock-up in 1862. The police escorted the gold, checked licences and carried out administrative duties on the goldfield. The lock-up, which is located behind the police station, has slab timber walls and still has its original door.

Church of the Holy Redeemer Anglican Church
The Anglican church (The Church of the Holy Redeemer) was built of local stone between 1866 and 1873 to replace the first, short-lived church and rectory (built in 1859, in ruin by 1865). It was consecrated and opened by noted ecclesiastical figure, Bishop Samuel Marsden. It is a very simple and unpretentious building. Services are still held on the 4th Sunday of each month. For more information check out http://www.mudgeehistory.com.au/churches/churches2.html.

Windeyer Public School
Now just part of the village public school, the original brick building was opened in 1859. It is the only survivor of ten schools which once operated in the district. In 1859 there were 53 students enrolled but by 1877 the school population had dropped to seven. It peaked at 100 in 1900 and was back down to 25 in 1997. The teacher originally lived in the school building but a residence was built in 1899 which lies to the left of the school.

Windeyer Hotel
The Windeyer Hotel, now known as the Gold & Fleece Hotel, was built in 1911 on the site of an older inn. Look at it and imagine that this was once the centre of a thriving, bustling village. The community hall to the left (1911) was once used for travelling picture shows and the house over the road was formerly a bakery. A butcher's shop, two stores and an inn were once located nearby.

Fossicking
Windeyer has a number of good fossicking areas where visitors may try their luck with shovels and pans. The Bushlands Tourist Park can suggest suitable locations.

The Chinese At Windeyer
The period from 1852 to 1862 was a boom time for Windeyer. There were six main settlements spread across the valley and there were large numbers of Chinese miners living in tent villages. As with many other goldfields, tensions developed between the Europeans and the Chinese. Riots against the Chinese broke out in 1854. The key difference was the Europeans were individual miners, the Chinese, who were known to have been hard-workers, worked collectively. They built aqueducts out of river stone including one that was 2 km long. It still exists but, sadly, all remnants are on private property and not open for inspection. These water races and aqueducts were erected using only a plumb-bob and wooden bow. Yet they were so accurate and precise that the races were built at just the right angle for water to trickle down from a creek to the diggings. The Chinese kept to themselves and a number of myths grew up around them. It is said that the bones of the Chinese dead were hollowed out and filled with gold, either because they believed the gold would be useful in the afterlife or because the bodies were exhumed and returned to China. There were two burial sites but, unfortunately, most of the headstones were vandalised and destroyed. The graves were apparently rounded to ensure evil spirits could not hide in the corners.

* Prior to the arrival of Europeans the area was home to the Wiradjuri Aborigines.

* Windeyer began as a farming district consisting of a few large properties.

* Gold was first discovered in the area late in 1851. Both alluvial and, to a lesser extent, reef mining were successfully carried out and the returns proved considerable.

* From 1852 to 1862 there were six main settlements in existence as well as numerous Chinese tent villages.

* Around this time it was the largest gold mining community in New South Wales.

* In 1853 Windeyer had three inns, three stores and a collection of stringybark huts and tents.

* Tensions developed between the Europeans and the Chinese on the goldfields. The latter became the object of riots in 1854.

* The settlement at Richardsons Point was gazetted as the village of Windeyer in 1859.

* A school, church, police station, post office and cricket club were also in existence by the mid-1860s.

* The Church of the Redeemer was consecrated by Bishop Samuel Marsden in 1873.

* The town's hotel, the Commercial Hotel, was relocated from Queensland in 1911.

* During the Great Depression of the 1930s there was a revival of interest in the goldfields as hopefuls picked over the old mullock heaps.

* In the 1970s the Commercial Hotel was renamed the Gold & Fleece Hotel.

* In 1983 a local grazier received the highest price ever secured on the Australian mainland for a bale of wool - 3800 cents a kilo.

* The Eaglehawk mine was operating as a working reef mine and tourist attraction until 1989.

* Today the area is noted for its farming and its superfine wool. There is an hotel and a caravan/tourist park with tennis courts and a general store. 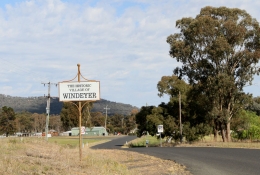 The sign says "Historic Village" but there is very little left of the "tent village". 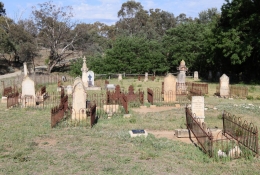 The Windeyer cemetery was established in 1856. 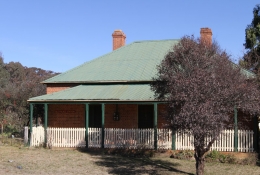 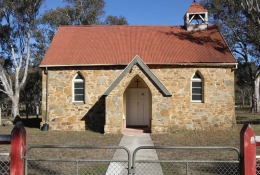 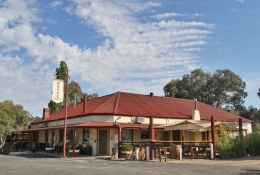