Historic ferry where travellers on the Great North Road crossed the Hawkesbury River.

Wisemans Ferry is located 73 km north of the centre of Sydney via Dural and Maroota.

The settlement was named after the ferry which crossed the Hawkesbury River taking travellers from Sydney on the Great North Road. It was named after Solomon Wiseman, a bargeman on the Thames, who arrived in Sydney as a convict on 20 August 1806. In 1817 Wiseman was granted 200 acres on the banks of the Hawkesbury River where by 1821 had he established an inn named the "Sign of the Packet".

The Story of Solomon Wiseman
The tiny township was named after Solomon Wiseman (1777-1838), a Londoner who was a lighterman on the Thames until, in 1805, he was found guilty of stealing wood and sentenced to death. His sentence was commuted and he was transported, with his wife and two children, to Sydney Town in 1806. He was given his ticket of leave in 1810 and pardoned in 1812. As a skilled bargeman he became involved in coastal shipping until 1817 when, after two of his ships were wrecked, he was granted land on the Hawkesbury. He established an inn, "The Sign of the Packet" and when he heard that the government were building a road from Sydney to the Hunter Valley he successfully lobbied to have the road pass by his holding. The result was that he supplied the convict gangs with food and he built a grand two-storey stone house facing the river which became the town's hotel. He subsequently obtained the licence to operate the ferry across the Hawkesbury. It is now the oldest operational ferry in Australia. Wiseman died in 1838 and his land was first subdivided in 1857. There is a statue of Wiseman near the hotel. The book, The Secret River, was written by Wiseman's great-great-great-granddaughter, Kate Grenville. It tells, in fictional terms, of Wiseman's life and was made into an ABC-TV miniseries in 2015.

Wisemans Inn Hotel
There is no better way to make contact with Solomon Wiseman than to have a drink at the Wisemans Inn Hotel which was built in 1826-1827 as an elegant two-storey private residence, Cobham Hall. With the advent of the Great North Road it was converted into an inn which Wiseman named The Branch Inn. The building has been extensively altered but much of the original structure still remains as can be seen by the sturdy sandstone which still forms the basis of the structure.

The Great North Road
Across the Hawkesbury River from Wisemans Ferry is the beginning of a section of the Old Great North Road. There is a clear sign marking a dirt road through the bush. A sign nearby titled Welcome to the Old Great North Road includes the following information: "The Great North Road, originally traced in 1825 by Heneage Finch and completed in 1836, was constructed using convict labour. It spanned 264 km between Sydney and the settlement of the Hunter Valley. Up to 720 convicts - some in chains - worked on the Road. Evidence of their day-to-day life includes stockade sites, handpicked waterholes, and graffiti engraved into the sandstone." The sign explains that by 1836 the road had been almost abandoned and that "as a consequence, the 43 km section of the Road located within and adjacent to Dharug and Yengo National Parks, is the only portion that remains undeveloped and relatively intact. This section has been named the Old Great North Road to distinguish it from the remaining modernised sections. It is nationally significant and the three remaining bridges north of the Hawkesbury River are the oldest surviving stone bridges on mainland Australia. The road was closed to motor vehicles in December, 1992." The Great North Road had reached Wisemans Ferry by 1828 but difficulties occurred when it started across the river. Major Mitchell surveyed a new route west of the ferry crossing which was known as the Ten Mile Hollow. Work began in early 1829 and was completed six months later. The road was carved out of solid bedrock. In some places the steep stone retaining walls were up to 12 metres high and supported by massive buttresses. It has been classified by the National Trust.

St Mary Magdalene's Church of England
Located on the road leading to Webbs Creek ferry, the original Church of England was built by Solomon Wiseman around 1840 but by the 1880s it had fallen into disrepair and a new church was constructed. The current church, dating from the 1880s, was built using many of the pieces of sandstone from the 1840s church. It was paid for by public subscription. There is a school of thought that believes the current church was designed by the colonial architect, Edmund Blacket, but this is unlikely as he died in 1883 and was in England in 1880.

Wisemans Ferry Cemetery
Apart from its obvious historic interest (it is one of the oldest cemeteries in Australia), the Wisemans Ferry Cemetery is of particular interest because it contains the grave of Peter Hibbs, who was born in 1757 and who travelled to Australia with both Captain James Cook in 1770 and Captain Arthur Phillip in 1788. It is located 3 km along the Singleton Road from Wisemans Ferry.

Spencer
One of the Hawkesbury River's best kept secrets, Spencer lies 27 km down river (turn right when you cross the Hawkesbury River) from Wisemans Ferry. Located on the northern side of the river the road is winding (but pretty) and the village has little more than a General Store, a jetty and a riparian ambience of quietness and peacefulness.

St Albans
The central attraction at St Albans is the delightful Settlers Arms which is located beside the Macdonald River. A sandstone two-storey pub, full of authentic, historic charm, it dates from 1848 (although the pub claims it dates from 1836) when it became a popular watering hole for the cattle drovers taking animals through to the Hunter Valley, the local farmers who came to the jetty to trade and collect supplies, and the riverboat workers who knew St Albans as the limit of navigation. Today the Settlers Arms Inn, remains largely unaltered and is full of genuine historic charm, serves excellent meals and is hugely popular on weekends.

* Prior to the arrival of Europeans in the valley the district was the home of the Dharug Aborigines who had lived in the area for over 20,000 years.

* By 1794 settlers had moved into the area upriver and west of Wisemans Ferry.  Grain and other crops were being grown for the colony at Sydney Town which was suffering acute food shortages. At the time the farmers along the Hawkesbury provided Sydney Town with almost half its food supply.

* By 1796 Wisemans Ferry (although there was no ferry) had developed as an important river port. The food was shipped down the river and then around the coast and into Sydney Harbour.

* Troubles and conflict with the local Aborigines occurred almost immediately. In 1799 five settlers from the district - Simon Freebody, William Butler, Ed Powell, James Metcalfe and William Timms - were brought to trial for the murder of two Aboriginal boys. In court Sarah Hodgkinson claimed that about three weeks before the murders her husband had been killed by Aborigines. She told the court how she had asked the men to kill the boys. The five defendants were all found guilty. But instead of sentencing them, they were all set free and the case and the sentence were referred to His Majesty's Ministers in England. Governor Hunter wrote to England protesting: "Those men found guilty of murder are now at large and living upon these farms, as much at their ease as ever..." Three years later the men were pardoned.

* The settlement was named after the convict Solomon Wiseman who in 1817 was granted 200 acres on the banks of the Hawkesbury River by Governor Macquarie.

* By 1821 Wiseman had established an inn named the 'Sign of the Packet'.

* In 1826 Wiseman built a two-storey residence, Cobham Hall, which he later used as an hotel calling it The Branch Inn. This capitalised on a new route to Newcastle via Castle Hill which was built in 1826 and became known as the Great North Road. In 1829 Solomon Wiseman built a punt and was granted a seven year lease on the rights to transport goods and travellers across the Hawkesbury River.

* In 1945 a bridge was opened at Peats Ferry further downstream near Brooklyn and traffic through Wisemans Ferry declined.

* Today the town is a popular place for Sydneysiders on weekends. The pub and cafe are always busy.

There is a specific website devoted to the Hawkesbury. Check out http://www.hawkesburyaustralia.com.au/info/towns/wisemans-ferry. 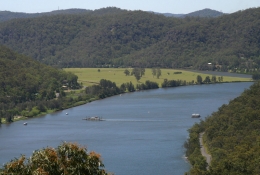 The bend in the Hawkesbury River from Hawkins Lookout above Wisemans Ferry. 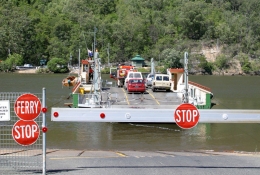 The ferry across the Hawkesbury River at Wisemans Ferry. 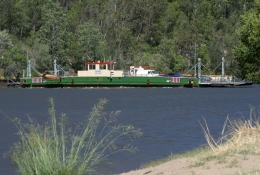 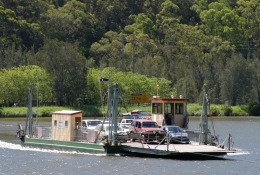 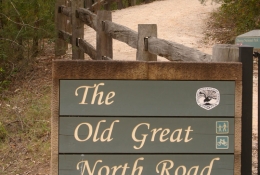 The Old Great North Road on the northern side of the Hawkesbury River at Wisemans Ferry. 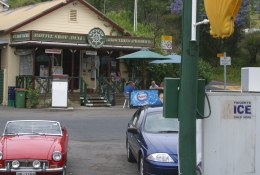 The General Store at Spencer downriver from Wisemans Ferry. 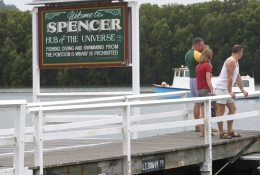 The jetty at Spencer downriver from Wisemans Ferry. 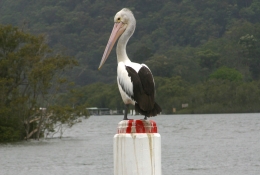 A pelican on the jetty at Spencer downriver from Wisemans Ferry.