Wittenoom was officially removed from the Western Australian maps in 2007 and legislation was introduced to forcibly remove the last three residents in 2015. This ghost town located at the mouth of the Wittenoom Gorge is the home of Australia’s greatest industrial disaster. However, being in the Hamersley Range, it can lay claim to being located in one of the most beautiful areas of the Pilbara.
The warning signs are clear: ‘DANGER - Asbestos Tailings Risk Area. Inhaling Asbestos Fibres May Cause Cancer
• Avoid dusty situations
• DON’T let children play in the tailings.’

Wittenoom is located 1425 km north of Perth via Newman. It is 460 m above sea level.

Wittenoom and Wittenoom Gorge were named after the pastoralist and politician Sir Edward Horne Wittenoom (1854–1936).

Beware: The Most Dangerous Town in Australia
The horrors of Wittenoom can be easily measured by the harsh fact that of the 20,000 men, women and children who lived and worked in Wittenoom during the mining boom (it lasted from 1950 through to the early 1960s) over 2,000 (and the figure is still rising) have died from the asbestos-related diseases of asbestosis, lung cancer and mesothelioma. It is now estimated that over 25 per cent of all the men who worked in the mines will die of asbestos-related diseases.
The once-thriving town is now a virtual ghost town. Shops are boarded up. The two schools are closed. The local cinema is derelict. In their ignorance, the original settlers used asbestos tailings to break the monotony of the Pilbara’s harsh red soils. Hence asbestos was used in gardens, in the school yards, on the roads and at the race track. Asbestos tailings were even used to build the airport. By the 1980s the local shire council and residents, aware of the potential problems of airborne asbestos, have attempted to rectify the situation. Car parks were scraped and resheeted, roads were resealed and yards were covered with clean fill.
By the 1980s the 50-odd residents left in the town argued that the level of airborne asbestos in Wittenoom was seven times less than the level recorded in Perth in 1978. However, this is certainly not the view of the Shire of Ashburton and the Health Department of Western Australia which have long advocated the avoidance of the Wittenoom area. They consider airborne blue asbestos fibres in and around Wittenoom to be a clear risk to residents and to people working in the area.
Although the threat to short-term visitors is much lower, it is considered a risk nonetheless and one they recommend avoiding.
Their advice to those who visited the area in 1988 was:
* Keep to the main roads at all times
* Pay careful attention to warning signs
* In windy or dusty conditions keep car windows closed
* Do not park or walk on or near the tailings (children are the biggest risk here)
* Do not take asbestos ore as a souvenir
* Camp only in areas set aside for that purpose
Camping is not permitted in Wittenoom Gorge or Yampire Gorge and visits to contaminated areas should be avoided.

On 21 March, 2019 The Guardian printed the following story (see https://www.theguardian.com/australia-news/2019/mar/21/final-wittenoom-residents-to-be-forced-out-of-asbestos-ridden-mining-town?):
Landowners who refuse to move from the most contaminated site in the southern hemisphere will have their properties compulsorily acquired by the Western Australian government.
A bill to finalise the closure of the former asbestos mining town Wittenoom in the Pilbara, which was de-gazetted in 2007, was due to be introduced to state parliament on Wednesday.
Five landowners, three of whom still live in the former town site, will be paid generous compensation packages that will cost the state government $2m-$3m in total, lands minister Ben Wyatt said.
Wyatt said many of the 17 freehold properties that remained were bought “effectively for $1 given the nature of the value of them”.
'Where is better than here?' Last six residents of Wittenoom resist efforts to close asbestos mining town
“We’re proposing for a principal property $325,000, then $65,000 for every subsequent property after that,” he told ABC radio.
“We also have a compensation entitlement for if there is no house, it’s just a piece of land, and on top of that, we’ll provide moving fees and relocation fees of $50,000.”
More than 2,000 workers and residents of Wittenoom have died from asbestos-related diseases and Wyatt said he was particularly concerned about tourists who still visited the area, despite signs warning of the deadly risks."

Karijini National Park
To the south of Wittenoom lies the Karijini National Park. It used to be accessible from Wittenoom. Today the sensible entry point is at Tom Price. The park is located 60 km to the east of Tom Price in the Hamersley Ranges. It is home to the Banyjima, Yinhawangka and Kurrama Aboriginal people. The Park, the second largest in Western Australia, covers 627,442 ha and incorporates two billion year old gorges, where rain has cut 45 metre ravines forming dramatic outcrops and tiered rock formations. There are a number of worthwhile experiences in the National Park. There is a very detailed brochure which can be downloaded at https://parks.dpaw.wa.gov.au/sites/default/files/downloads/parks/20130200%20Karijini%20National%20Park%20broch6.pdf. The following are regarded as capturing the essence of the park.

This sequence describes the route into the park from Tom Price.
Climbing Mount Bruce  (Punurrunha)
A sealed road heads east of Tom Price into Karijini. This is the Karijini Drive Road. After about 35 km there is a turnoff on the right to the Marandoo Mine Site. Karijini Drive continues eastwards and at the western entrance to the Park, just beyond Bunjima Drive, there is a road which leads to Mt Bruce (at 1235 metres the second-highest peak in the state). It is possible to climb Mount Bruce but the track is 9.2 km up hill (it will take around 3 hours return) with the reward being that (a) you have climbed the second highest peak in Western Australia) and you will experience a superb, panoramic view over the spinifex covered plains and the rugged Hamersley Range (b) there is a 500 metre (30 minutes return) Marandoo View walk which provides an excellent view over the Marandoo Mine site.

The Park's Visitor Centre
Drive 37 km east on Karijini Drive and you will reach the Karijini National Park eastern entrance station. Turn north on Bunjima Drive and 10 km north you will reach the Visitor Centre. The centre is designed to represent a goanna moving through the country. The goanna is an animal with strong significance for the local Banyjima Aboriginal people who have been in the area for at least 30,000 years. The centre is an ideal introduction to the park. It has interactive displays highlighting the geology, plants, animals and Aboriginal culture of the Park. The Visitor Centre can be contacted on (08) 9189 8121.

Dales Day Use Area
Drive 12 km east and you will reach Dales Day Use and Camping Area. There are two highlights: Fortesque Falls and the Circular Pool. There is a swimming hole at Fortescue Falls. From the car park there is a one hour walk down a staircase and along paths to the falls. There is also the refreshing, spring-fed Fern Pool or fitter visitors can take the two-hour return walk to Circular Pool, at the other end of the gorge.

Kalamina Falls
Return 12 km to the Visitor Centre and continue westward on the Bunjima Drive for 17 km and you will reach a northern turn to the Kalamina Falls. The gorge is another 8 km and it recognised as one of the prettiest gorges in the park with an easy trail and a pleasant picnic area. There is a 3 km (3 hours return) walk into the gorge.

Joffre and Knox Gorges
Return to Bunjima Drive and continue west for 12 km. The first road (there is another one 2.5 km along Bunjima Drive) offers access to Joffre and Knox Gorges. There are two short walks to lookouts - it is 100 metres from the car park to Joffre Lookout and steps go down to a lookout where the Joffre Falls, a spectacular curved waterfall which forms a natural amphitheatre can be viewed. The Knox Lookout is 300 metres from the car park and offers a panoramic view which is particularly impressive in the early morning or late afternoon.

Karijini Eco Retreat, Lookouts and Weano Day Use
Return to Bunjima Drive, proceed for 2.5 km and turn north on Weano Road. The Eco Retreat is located along this road. The Eco Lodge is located within walking distance of Joffre Gorge. Owned by the local Gumala Aboriginal Corporation, it has accommodation options ranging from camping sites to deluxe eco tents. There is also an open air restaurant.
13 km further on are the lookouts over the Hancock and Weano Gorges. The Oxer and Junction Pool lookouts are 800 metres from the car park and provide impressive views over the Hancock Gorge. The Oxer Lookout has views over the junction of four gorges: Weano, Red, Hancock and Joffre. Many consider the view from Oxer Lookout to be one of the most spectacular sights in Western Australia; the vantage point offers a unique perspective of the area's enormity and grandeur.
This completes the journey through the park's main attractions. Return to Banjima Drive. It is 38 km to the Park's Western Entrance and 40 km to Tom Price.

Fauna and Flora in the Park
Karijini’s rugged red gorges boast abundant native vegetation such as spinifex, mulga, ghost gums and fig trees. Between June and September, colourful wildflowers such as wattles, lemongrass and northern bluebells bloom across the landscape. You may also spot rock wallabies, dingoes and the abundant birdlife that call Karijini home.

Tours of the Park
Lestok Tours run full day tours to the Park which can be booked at the Tom Price Visitor Centre, tel: (08) 9188 1112. Check out http://www.lestoktours.com.au/karijinipark.html for details. The tour includes a visit to Oxers Lookout and Circular Pool Lookout, a walk through Weano Gorge and a visit to Handrail Pool, exploration of Joffre Falls and Knox Lookout and a swim at Fern Pool.

* In 1861 the explorer Francis Gregory led an expedition into the Hamersley Ranges.

* The expedition reported on the rich pastoral potential of the Pilbara region and was responsible for the establishment of the towns of Roebourne and Cossack.

* The land around Wittenoom was subsequently settled and Wittenoom Gorge was named after the pastoralist and politician Sir Edward Horne Wittenoom (1854–1936).

* By 1917 the West Australian Mines department knew about asbestos at Wittenoom.

* The area remained pastoral, and very isolated, until the 1930s.

* The first major mining took place in 1939 at Yampire Gorge.

Mining moved to Wittenoom Gorge in 1943.

* The mining magnate, Lang Hancock, was one of a number of people involved in the early development of the site. He sold his interest to the CSR subsidiary, Australian Blue Asbestos Pty Ltd in 1943.

* Health concerns about asbestos dust were raised as early as 1943.

* As early as 1961 Wittenoom miner was diagnosed with mesothelioma.

* The mine closed in 1966 because it had become uneconomic.

* In 1993 the airport was officially closed.

* In 2007 the Western Australian government struck Wittenoom from the map.

* The town was officially declared a contaminated site in 2008.

* In 2015 the WA government drafted legislation to force people to leave the area.

* By 2017 only Lorraine Thomas, Mario Hartmann and Peter Heyward were still living in the town.

* Today it is recognised as the largest contaminated site in the Southern Hemisphere.

There is an extensive warning about visiting Wittenoom on this website - http://www.lands.wa.gov.au/Publications/Documents/Wittenoom_brochure.pdf. More information is available on the excellent WorkSafe report Asbestos: the Wittenoom Tragedy. Check out https://www.commerce.wa.gov.au/sites/default/files/atoms/files/wittenoom_transcript.pdf. 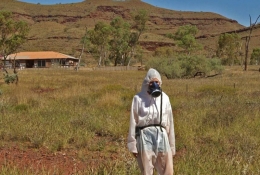 An ABC reporter in Wittenoom in 2016. 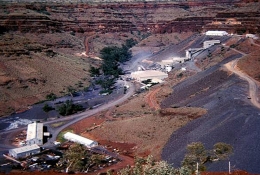 The Wittenoom mine in the 1960s 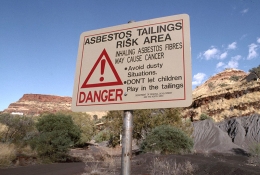