It is hard to imagine a more idyllic Australian bush setting than Wombeyan Caves. Located at the bottom of a valley the parklands around the caves are home to dozens of kangaroos and bower birds. The caves are exceptional - the highlights are the Wollondilly Cave (plenty of steps but the experience is superb) and the self-guided tour through Fig Tree Cave where the lighting and recorded commentary are automatically activated as you move from chamber to chamber. The Wombeyan Caves are never crowded because they are at the very outer limits of a day trip from Sydney and they attract only 30-40,000 people each year. On a sunny day it seems almost a crime to enter the caves. The bush is so peaceful and the air  is so clear and fresh.

There are two ways to get to Wombeyan Caves: the easy, comfortable long way and the spectacular, but rough, shorter way. The long way from Sydney, via Goulburn and Taralga, is 273 km but is on sealed roads. The shorter way via Mittagong and the very winding Wombeyan Caves Road is 179 km and, although most of it is on the Hume Freeway, it will take three and a half hours from Sydney because the last 62 km is over a narrow, winding and difficult road.

It is claimed that 'Wombeyan' is a Gundungurra Aboriginal word meaning 'grassy flats between two mountains'.

The area is known officially as the Wombeyan Karst Conservation Reserve, a term which includes both the extensive camping ground, the cabins and the caves. The term "karst" is used to describe karst landforms which occur "where rock is easily dissolved in natural waters (fresh). Karst landforms are typically found in limestone areas. Karst landforms are a labyrinthine terrain, incorporating the composite elements of air, water and minerals, and supporting diverse biological components. Karst is named after an area in Yugoslavia, 'Kras'. The name is derived from a Slavic word meaning 'bare and waterless'."

Visiting the Caves
There are four kinds of cave experiences offered at Wombeyan. The self-guided tours of the Fig Tree Cave and the Tinted Cave; the daily guided tours of Wollondilly Cave and Junction Cave; the intermittent, or occasional, tours of Kooringa Cave and Mulwarree Caves; and Adventure Tours.

Self-Guided Tours
Fig Tree Cave
The self-guided tour of the Fig Tree Cave involves buying tokens for the automatic turnstiles at the superintendent's office, wandering through the cave and pressing buttons which activate the lights and pre-recorded descriptions of the main features which include the galleries, the Opera House which features the Grand Stalagmites, the Colonnades and the Marble Way. The Victoria Arch, at the exit to the cave, is the natural habitat of the Brush Tailed Rock Wallaby and the Rock Warbler, a small olive brown bird. The first Europeans to see the Victoria Arch were John Oxley and John Macarthur in 1828. The cave was opened as early as the 1870s when visitors were issued with a candle and a guide pointed out the features with a magnesium flare. This continued until 1928 when the cave was closed to the public. It was reopened forty years later in 1968. Today the cave is open from 9.00 am - 4.30 pm.

Tinted Cave
Located 10-15 minutes from the Wollandilly Cave meeting point this is a self-guided cave which automatically lights itself as you walk through. A bonus is its proximity to Mares Forest Creek Canyon, a canyon of marble which, according to the enthusiastic rangers, offers some of the best swimming in the Southern Highlands.

Daily Guided Tours
Wollondilly Cave
The Wollondilly, regarded by many as probably the best of the caves in the Wombeyan group, was discovered by Charles Chalker in 1865 and opened to the public in 1885. The guided tour of the cave takes about 90 minutes, covers a distance of 800 metres, involved 520 steps and five ladders. During the tour, visitors see helictites, stalagtites and features named in the 19th century as the Crystal Cascades, Cathedral Cavern, Lot's Wife and the Organ Pipes. The tours are held every day at 1.00 pm and on Saturday and Sunday an additional tour takes place at 10.30 am. The word ‘Wollondilly’ is said to mean ‘running water over stones’ in the language of the local Aborigines.

Junction Cave
The Junction Cave was discovered by T.M. Chalker in 1897 and opened to the public in 1906. It is located 1.2 km from the kiosk and the guided tour takes 90 minutes and includes such features as the Curtains, the Crown of Thorns, the Chocolate Fringe, Chalkers Blanket, The Rapids and the Grand Column. The last three are regarded as the cave's highlights. The cave tour involves a walk of 400 metres, 350 steps and three ladders. The guided tours start every day at 2.30 pm.

Irregular Guided Tours
Kooringa Cave
The Kooringa Cave was discovered by Charles Chalker in 1865 and opened to the public in 1875. Although it is only a small cave, the shawls and stalagmites are exceptional. Kooringa is said to be a local Aboriginal word for 'king'. It is opened for inspection at the discretion of the guides. If you want to inspect the cave it is sensible to contact the superintendant's office before you visit the caves, tel: (02) 4843 5976.

Mulwaree Cave
The Mulwaree Cave was discovered by Charles Chalker in 1865 and opened to the public in 1885. It has spectacular stalactites close to the pathways which have led the guides to call it the Connoisseur's Cave. Mulwaree is said to be Aboriginal for ‘chain of ponds’. It is opened for inspection at the discretion of the guides. If you want to inspect the cave it is sensible to contact the superintendant's office before you visit the caves, tel: (02) 4843 5976

Adventure Tours
In recent times the Adventure Tours at the caves have been reintroduced. They are suitable for people aged 15 and over, require average fitness and are designed for a maximum group of ten with abseiling instruction being an optional extra. Each group is accompanied by two guides. All the necessary equipment is provided with participants only needing to bring a packed lunch, joggers with tread (or walking boots), an old jumper and old clothes.

For younger adventurers there is a two-hour Mini Adventure Tour and for the older and less mobile there is a three-hour guided Heritage Tour which uses torches. These tours are held according to demand and therefore it is sensible to call the superintendents office, tel: (02) 4843 5976 which also will provide information about camping, road conditions, and weather.

The Sandstone Tunnel (Bullio Tunnel) on Wombeyan Caves Road
If you decide to take the long, slow route from Mittagong to Wombeyan Caves you will pass through the famous Bullio Tunnel which was hand-cut in 1899.
There is a plaque at the end of the tunnel which reads: "The tunnel was completed during 1899 as part of a new tourist road linking the Southern Highlands to Wombeyan Caves, in rural NSW. Officially opened on 29th January 1900, the road was originally named Duprez Road in honour of Adolphe Prosper Duprez of Bowral who was the driving force behind its construction."

* Prior to European settlement the area was inhabited by people from the Gundungurra Aboriginal language group.

* The first Europeans to discover the Wombeyan Caves were John Oxley and John Macarthur in 1828. Oxley was exploring the area. Macarthur, who already was an established merino breeder, was travelling with Oxley hoping to find suitable land to expand his grazing empire. They were on their fifth night out from Berrima when they discovered the caves.

* Oxley, Macarthur and their party camped near the current sight of the kiosk and during the night the horses strayed downstream and when the explorers went searching for them they discovered the Victoria Arch which is the entrance to the Fig Tree Cave.

* In 1842 Reverend Denning became the first European to enter and explore the Fig Tree Cave.

* It wasn’t until 1865, with the appointment of Charles Chalker as first caretaker, that the system was explored and systematically opened up to the general public. Chalker discovered nine major caves although today the Basin Cave, Glass Cave, Forest Creek Cave, Guineacor Cave and Grant’s Cave, many of which are inaccessible, are closed to the public.

* In 1928 the first caves were lit electrically. The Fig Tree Cave was closed to the public at this time.

* The Caves House was burnt down in 1935 and has not been replaced.

* In 1968 the Fig Tree Cave was opened to the public as a self-guided cave.

The Wombeyan Caves campground has 100 camping sites, cottages, cabins, a communal kitchen, barbecues and is situated on the banks of Wombeyan Creek, for more details check out http://www.environment.nsw.gov.au/NationalParks/parkCamping.aspx?id=N0352 or tel: (02) 4843 5976.

There is a kiosk selling a small number of basic food items. Otherwise it is essential to bring your own food.

The National Parks & Wildlife rangers and guides have created their own website at http://www.wombeyancaves.com/ which provides up to date information relating to the caves. For details about each of the caves check out http://www.nationalparks.nsw.gov.au/parks?keyword=Wombeyan%20Karst%20Conservation%20Reserve  and http://www.environment.nsw.gov.au/NationalParks/parkShowCaves.aspx?id=N0352 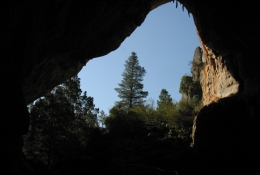 The exit from the Fig Tree Cave. 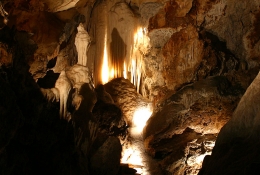 The stalagmite known as Lot's Wife in the Wollondilly Cave. 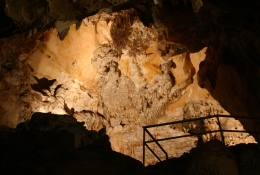 A viewing platform and formations in the Wollondilly Cave 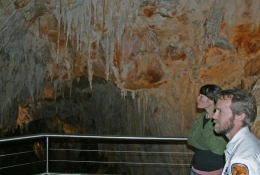 A National Parks and Wildlife guide showing some of the stalactites in the Wollondilly Cave. 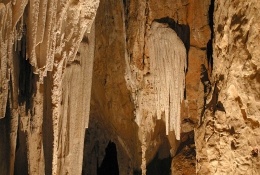 Formations in the Wollondilly Cave at the Wombeyan Caves complex. 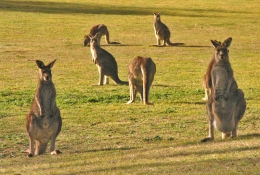 Kangaroos in the late afternoon on the camp grounds at the Wombeyan Caves site. 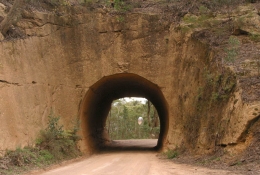 The hand-carved tunnel which was part of the tourist road to Wombeyan Caves built in 1899.