Quiet town on the D'Entrecasteaux Channel

Woodbridge lies on the D'Entrecasteaux Channel opposite Bruny Island. Historically it was a brutal outpost for sealers and whalers and the history of relations with the local Aborigines is a story of great viciousness and maltreatment. Today it is an attractive alternative lifestyle destination with craft shops, sculpture gardens, excellent boutique food and wine and charming cafes and restaurants. It is also noted for its orchards of apples, cherries and pears. Woodbridge is recognised as one of the prettiest small towns on the Channel.

Woodbridge is located 36 km south of Hobart via the Channel Highway.

Woodbridge was originally named Peppermint Bay after a nearby bay but the locals decided to change it to Woodbridge in 1866. Woodbridge was the name of the property owned by a prominent local citizen, George Miles.

Woodbridge Marine Discovery Centre
The Woodbridge Marine Discovery Centre at Woodbridge was specifically designed to cater for school children interested in marine biology. "The Centre houses fully equipped teaching areas, an aquarium room, marine pond, touch tanks and lots of displays as well as a large collection of cool temperate marine species. The Centre also has its own 13.5m research vessel, the Penghana, and a marine farming lease. Interactive programs are available for students from Kindergarten to Year 12." For more information check out https://education.tas.edu.au/woodbridge/mdc/default.aspx. The Centre is open to members of the public from 2.15 pm - 4.00 pm on Wednesday afternoons during school term times. Entry is by donation, and volunteers are on hand to answer questions. For more information check out http://www.mdca.org.au/centres/woodbridge.

Fleurtys Cafe and Sculpture Walk
Located at 3866 Channel Highway, Birchs Bay and set up the hill in bushland, Fleurtys (named after a convict sawyer named Charles Fleurty) is much more than just an idyllic cafe. Of particular interest is the Sculpture Walk. For more details check out http://www.fleurtys.com.au. There are two walks from the cafe - the Peppers and Proteas (30 minutes) and the Forest Walk (50 minutes) - and they pass a number of interesting sculptures which have been both purchased and commissioned from the sculptor who lives on the property. There is a downloadable map of the walks. Check out http://www.fleurtys.com.au/walks.html.

Grandvewe Cheeses
Located at 59 Devlyns Road, Birchs Bay, which is 3 km south of Woodbridge, Grandvewe Cheeses proudly claim to be the only sheep milk cheesery in Tasmania. It offers visitors the opportunity to purchase cheeses, enjoy a meal at their cafe, and view the process of cheese making. It is open from September to June from 10.00 am - 5.00 pm and July-August from 10.00 am - 4.00 pm. Check out http://grandvewe.com.au or tel: (03) 6267 4099.

* The first European into the area was the French explorer, Bruni D'Entrecasteaux, who travelled up the channel in 1792.

* IN 1795 Lieutenant John Hayes landed at Oyster Cove, explored the area and befriended the local Aborigines.

* By the early 1800s sealers, whalers and timber cutters had moved into the area. The treated the Aborigines appallingly and the local population dropped from an estimated 7,000 to a few hundred in less than a decade.

* Timber cutters and sealers tended to stay for a short time and so the township did not really develop.

* In 1830 Truganini was captured off Oyster Cove.

* Around this time a penal colony was established at Oyster Cove. It was short lived.

* By 1847 Oyster Cove had become the last Tasmanian Aboriginal settlement in Van Diemen's Land. In that year the remnants, now only 44 people, were taken from Flinders Island to the old Penal Colony at Oyster Cove.

* In 1976 Truganini's ashes were thrown to the winds on the D'Entrecasteaux Channel. 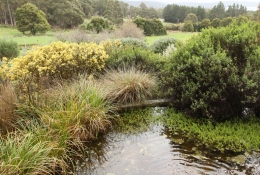 The view from the front veranda at Fleurtys 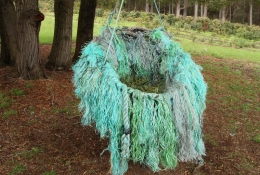 A sculpture on the Sculpture Walk at Fleurtys 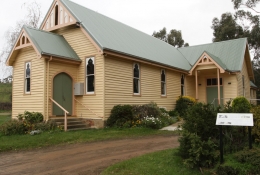 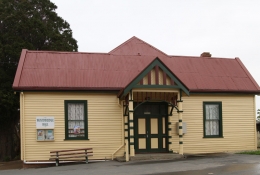 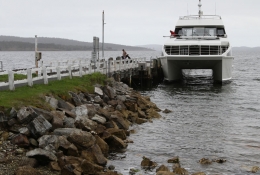 A catamaran moors at the Woodbridge Marine Discovery Centre jetty 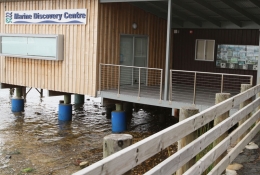