Town on the banks of the Richmond River.

Woodburn is a small township on the banks of the Richmond River. It was once an important river port but today it is a stopover on the Pacific Highway for people travelling between Brisbane to Sydney.

Woodburn is located on the Richmond River 715 km north of Sydney on the Pacific Highway.

The local Bundjalung Aborigines knew this section of the Richmond River as 'maniworkan'. When cedar cutters arrived in the district they called it Rocky Mouth, an accurate, if unimaginative, description. When the settlement reached a sufficient size to have a post office it was realised that there was another Rocky Mouth in New South Wales and so the name was changed to Woodburn by William Gollan, the town's first postmaster. The name became official in 1896.

New Italy Museum
What a remarkable story! The New Italy Museum Complex is located on the Pacific Highway, 10 km south of Woodburn. The complex is a celebration of a unique chapter in the nation's immigration story. It is a little known tale of courage, daring, hardship and ultimately the reward of settling and prospering in a new land.

Told on a series of three murals at the complex: "The New Italy story began in 1880 when farming families from Veneto in Northern Italy (it lies to the west of Venice) were beguiled by the Marquis de Rays to purchase land and homes in the phantom paradise of La Nouvelle France (on New Ireland in the Bismarck Archipelago to the north-east of Papua New Guinea) ... The expedition arrived at Port Breton in October. The voyage took three months and conditions were so shocking that nearly 100 died and were buried at sea. The rest were confronted by depravation, no shelter from the torrential rain and meagre supplies. The next 4 months saw terrible suffering, illness, starvation and many more deaths. In desperation the half-disabled 'India' set sail for Australia. Needing food, the ship put in at Noumea, where the authorities impounded the vessel due to its un-seaworthiness. The English Consul contacted Sir Henry Parkes who sent the steamer 'James Patterson' to rescue the contingent. On Friday 8 April 1881, 217 of the original 340 emigrants arrived in Sydney, destitute and in poor health ... These survivors founded the settlement now called New Italy. They were capable colonists and thrived on the barren land. Building homes, digging wells, growing diverse crops and fruit trees, raising cattle and sheep, cutting railway sleepers and producing wine, cheese and salami. By 1888 the thriving community had a school, post office, church and two wine shops, a lucrative silk production called Sericulture and even a bicycle shop."

The New Italy complex was opened by the Italian Consul General in 1989. It is worth stopping and inspecting. It contains a museum with fascinating memorabilia; the 'Osteria Veneta' - a mud-brick and timber replica of an original New Italy homestead which houses a licensed Australian and Italian restaurant; a replica of Michelangelo's David; an Italian Pavilion which records the history of Italy and Italian migration to Australia; and an Aboriginal arts and crafts gallery. The complex is open daily, tel: (02) 6682 2622. Check out http://newitaly.com.au for more details.

Broadwater National Park
Broadwater National Park covers 4,245 ha of coastal heath and wetlands including 8 km of beach frontage. It contains many large sand dunes and swale gullies that were formed 60,000 years ago. Some of the sand ridges formed by wind-blown sands are over 30m above sea level. Covered largely by coastal heath, eucalypt forests and wetlands, the park is particularly impressive in springtime when Christmas bells, golden bush peas, swamp lilies and sun orchards mingle with other spring wildflowers and the bush is ablaze with pinks, yellows, white and blues. There are many bird species in the park particularly the ibis, sea eagles, pied oyster catchers and terns which can be found on the beach and the ring tail possums, red-necked wallabies, echidnas, bandicoots, possums and bush rats. The Bundjalung Aborigines still live in the area and there are a number of sacred sites in the park. For further information check out http://www.environment.nsw.gov.au/NationalParks/parkHome.aspx?id=N0007 .

* Prior to European settlement, the Woodburn area had been inhabited by the Bundjalung Aborigines for thousands of years. They lived on the produce gained from the Richmond River - a rich mixture of fish, shellfish and turtles - and animals they found on the river banks.

* In the 1840s cedar cutters moved into the district. This prompted considerable activity with a local timber merchant, Billy Wright, building a number of large vessels to ship produce up and down the Richmond River. These vessels arrived in the district in the early 1850s and ports - Wardell, Broadwater, Coraki - grew along the river.

* By the early 1860s a settlement was beginning to form around the port at the present site of Woodburn. William Cravigan, who took up land on the northern river bank in 1863, is credited with being the town's first settler.

* Other people settled near Cravigan and by 1868 there were enough people to justify the establishment of both a post office and general store. In the next decade more shops and a pub were built and by 1879 the town had its first policeman.

* It wasn't until the late 1860s that the town spread south across the river.

* In 1869 a Presbyterian Church was built on the southern bank and the following year a school was erected.

* By the 1870s the district had become an important sugar growing area.

* In 1882 Italians from Veneto in Northern Italy settled near Woodburn. See New Italy under Things to See for more detailed information.

* In 1935, in an attempt to beautify the town, 18 phoenix canariensis palms were planted in Woodburn Street.

* On 7 April, 1945 to town was ravaged by a cyclone which destroyed both the Empire and Richmond Hotels, the Catholic Church, the School of Arts and the Rowing Club.

The local Visitor Information Centre has a useful website: http://www.visitrichmondvalley.com.au/pages/woodburn-new-italy/ 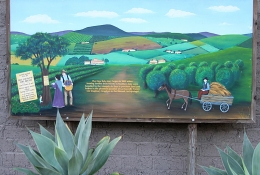 One of the murals at New Italy Museum 10km south of Woodburn. 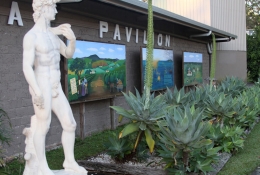 The statue of David and the murals at New Italy Museum 10km south of Woodburn. 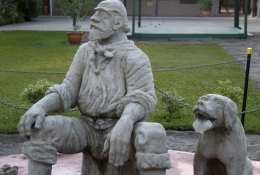 The pioneer and his dog sculpture at New Italy Museum 10km south of Woodburn.