Holiday town on the NSW North Coast near Grafton.

Some towns rejoice in the title "the best kept secret", Wooli is one such town. On one level it is a beach resort, a destination for retirement and surfing aficionados. Like so many NSW North Coast towns it is hidden far from the Pacific Highway. The committed traveller takes the turnoff from the Pacific Highway 12 km south of Grafton and travels east to Lake Hiawatha where the road divides. North lies Minnie Waters and south is Wooli. In other words you have to travel nearly 100km (50km each way) to get there and that is a journey few people roaring up or down the Pacific Highway are prepared to make. The result: a sleepy town largely unchanged where simple fibro holiday homes, old codgers throwing lines into the surf and the occasional surfer are rarely interrupted by tourists and where, amazingly, no wide-eyed developer has decided to try and turn this little piece of paradise into another Byron Bay or Noosa. The town is located on a narrow peninsula with the Wooli River on one side and the Pacific Ocean on the other. The Solitary Island Marine Reserve is on the east. It is surrounded by the Yuraygir National Park.

Wooli is located 635 km north of Sydney via the Pacific Highway. It is located near the mouth of the Wooli River 47km west of Grafton.

Wooli is named after the Wooli Wooli River. It has been claimed that 'wooli' means 'cedar tree' in the language of the local Yaegl tribe.

Fishing and Boating
The area is noted for its excellent oysters (an industry which has existed since the 1880s) and the fresh seafood from the area is well known and admired. The area is noted for its excellent seafood particularly the locally grown Sydney oysters. This is an ideal location for fishing and surfing. Deep sea diving and fishing charter boats operate from behind the Wooli kiosk.

Wilsons Headland Walk
Apart from walking along the beach (which is peaceful and always worth doing) there is an excellent walk on Wilsons Headland (3 km each way, 1 hour each way) which offers not only panoramic views along the coast and views across Solitary Island Marine Park but also an opportunity to admire the native animals - ranging from the endangered beach stone curlew and emu through to Eastern grey kangaroos, blossom bats, flying foxes and oprey - in the idyllic surrounds of the Yuraygir National Park. For more information check out http://www.environment.nsw.gov.au/nationalparks/parkWalking.aspx?id=N0040.

Solitary Island Marine Park
There are more birds in the Solitary Island Marine Park, the first marine park established in New South Wales. Here is it possible to see the crested tern, the wedge tailed shearwater and the sooty oyster catcher. The marine park is home to over 550 species of reef fish, 600 species of molluscs, four species of turtle and around 90 species of hard coral. There are colourful sea slugs and it is common to see migrating humpback  and right whales travelling north during June, July and August and heading south in September and October. This marine diversity is a result of the convergence of two great ocean currents. For more information check out http://www.mpa.nsw.gov.au/simp.html.

Yuraygir National Park
Yuraygir National Park is a true rarity. It stretches along 55 km of pristine Northern NSW coastline from Angourie to Red Rock. The fact that it is some 40-50 km from the Pacific Highway means that it is a mixture of peaceful, isolated beaches, excellent coastal bushwalking and high quality fishing, surfing and swimming. Check out http://www.environment.nsw.gov.au/NationalParks/parkWalking.aspx?id=N0040#YuraygirCoastalWalk for details.

Yuraygir Coastal Walk
This signposted 65 km walk, which is recommended to take four days although it can be done in less, traverses the coast from Angourie to Red Rock. Along the journey, as the brochure explains, "you will encounter vast heathland plains, long sandy beaches, crystal clear creeks and lagoons, rocky headlands and abundant wildflowers and birdlife". Check out http://www.environment.nsw.gov.au/resources/parks/brochures/20100479YuraygirCoastalWalk.pdf which can be downloaded and provides details of the walk.

Minnie Water and Illaroo Camping Area
In a sense Minnie Waters and Wooli are companion towns. Minnie Waters is located 14 km north of Wooli and is totally surrounded by the Yuraygir National Park. It is an isolated holiday destination which, like the whole area, offers bushwalks, coastal walking as well as fishing, surfing and swimming.

The Rocky Point Walk (2 km return) also begins at the Illaroo Camping Area and crosses a small sand ridge then returns along the shoreline. It offers the walker excellent views along the coastline.

More information is available from NSW National Parks & Wildlife, tel: (02) 6641 1500 and from http://www.environment.nsw.gov.au/nationalparks/parkWalking.aspx?id=N0040

* Prior to European settlement the Yaegl tribe and their neighbours the Gumbaingirr Aborigines had lived in the area for thousands of years.

* In the 1840s there is evidence of a massacre of Aboriginal people at Red Rock.

* By the 1880s Europeans were settling in the Wooli district and oyster farming and fishing date back to 1885.

* By the early 1890s the Wooli Wooli River was starting to attract holidaymakers mostly locals from the Clarence Valley.

* Conflict with the local Yaegl people continued and was so violent that there is evidence of a large-scale massacre of Aboriginal people at Lake Hiawatha to the north of Wooli as late as the 1920s.

* Wooli was officially declared a village in 1923.

* In 1969 there was considerable sand mining in the area.

* In the 1970s the entrance walls to the Wooli Wooli River were built to provide better navigation for fishing boats.

* The Wooli-Minnie Waters surf lifesaving club was formed as recently as 1995.

* In 2010 Wooli, because it lies between the ocean and the Wooli Wooli River, was subject to a number of environmental actions because of global warming and the potential for the long sand bar upon which the town is built, to be adversely affected by changes in sea levels. The Get Up! organisation declared ""Wooli is really in the front line of a battle that's about to spread through community, coastal communities and inland communities around Australia."

* Today the town has a population of around 500.

There is a useful local website: http://www.clarencetourism.com/about-the-clarence/yamba-and-the-clarence-coast/wooli/p/52 and there is the Clarence River Tourism site with lots of information about accommodation, restaurants, cafes and tours - http://www.wooli-minniewater.com.au/villages/wooli/ 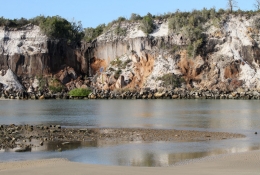 The dramatic cliffs near the mouth of the Wooli Wooli River. 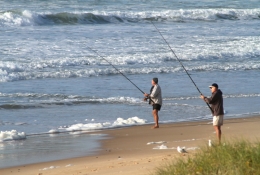 Fishing on the beach at Wooli. 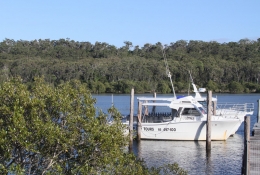 The wharf on the Wooli Wooli River with the Deep Sea tours boat.