Woomera is an artificial town specifically designed by the Long Range Weapons Board of Administration to provide accommodation and facilities for personnel - scientists, technicians and ancillary staff - who came to work at an isolated experimental station which was used to test rockets, weapons and missiles. It is located in the South Australian desert and the average annual rainfall is only 190 mm. The visitor leaves the Stuart Highway at Pimba, which is nothing more than a roadhouse, pub, service station and a few houses located near the railway line, and drives 6 km across the desert to Woomera.
During the 1960s Woomera had a population of over 5000. Today the population is around 120. Over the years it has changed from an important location for experimenting with rockets which, at various times, has been used by the Australian armed forces, Great Britain, the US Air Force, NASA and West Germany. Between 1969 and 1999 the Nurrungar joint US - Australian Ground Station operated in the area. It was located 19 km from Woomera and was closed to the public. And between 1999 and 2003 it was used by the Federal Government as the Woomera Immigration Detention Centre. It housed asylum seekers who had arrived in Australia by sea. Today Woomera township is open to the public. Its main appeal is the Woomera Heritage Centre and the Missile Park.

Woomera is an Aboriginal word for, as the Macquarie Dictionary defines it, "a type of throwing stick with a notch at one end for holding a dart or spear, thus giving increased leverage in throwing." The Dictionary says it is a Dharug word which means it must have originated with the language group that lived just west of Sydney.

Woomera Aircraft and Missile Park and Heritage Centre
Woomera Heritage Centre and Woomera Rocket Range Museum
The Woomera Heritage Centre is open from 7.00 am to 3.00 pm from March to November and open from 8.00 am - 2.00 pm from December to February. These times may vary. Tel: (08) 8673 7042 and 1300 761 620. As well as the rockets displayed outside, The Heritage Centre Museum has a number of interesting displays including Aboriginal artefacts and the story of the local Kokatha people; a display relating to the remarkable Len Beadell (see below) who did so much to open up Central Australia with his vast road building projects; a display which explains what life was like for those families who moved to Woomera in the 1950s and 1960s; and, not surprisingly, a detailed history of Woomera's rocket and aircraft history. It is a sensible starting point (it offers an overview and context) before going outside and exploring the exhibits at the Aircraft and Missile Park.

The Woomera Aircraft and Missile Park
The Woomera Aircraft and Missile Park has well preserved examples of most of the rockets which were launched at Woomera. There's a Black Arrow, a large rocket which was launched four times from June 1969 to October 1972. The first launch was destroyed almost immediately because it was unstable. The second and third launches were experimental firings. The fourth put a Prospero satellite into orbit.
There's a Meteor Mark 7, a British jet aircraft which was used against German V-1 rockets. This particular trainer aircraft joined the RAAF in 1951 and in 1960 joined trials at the Woomera Range. Powered by two Rolls Royce Derwent Engines it flew at over 500 mph (800 km/h).
There's a famous Jindivik (the name is said to mean "the hunted one"), the Australian designed and built pilotless target aircraft which was first manufactured in 1952 and completed over 100 flights.
There is also the Ikara, an Australian developed anti-submarine weapon, which was capable of delivering an American 44 type homing torpedo by means of radio tracking and guidance systems. The flight trials were conducted in Woomera between 1961-1969.

The Len Beadell Story and its importance for Woomera
Never heard of Len Beadell? Then you have never heard of the surveyor and road builder who, with a team of eight dedicated assistants (basically bulldozer drivers, mechanics and a cook), in the 1940s and 1950s built more than 6,500 kilometres of roads which opened up Central Australia.
It was Beadell who headed the “gunbarrel crew” which built that extraordinary track, the Gunbarrel Highway, from Victory Downs (just west of the Stuart Highway on the South Australia-Northern Territory border) across to Carnegie in Western Australia. It was also Beadell and his crew who constructed the Anne Beadell Highway (these were access roads across sand dunes and deserts rather than sealed highways) from Mabel Creek Station (west of Coober Pedy) across to Laverton.
Beadell was proud of his work and he left small aluminium plates along the way to ensure that the drivers who followed didn’t get lost. Each plate was stamped with the latitude and longitude and, frighteningly, the distance to the next waterhole or station.
The actual construction makes fascinating reading: “The typical modus operandi was for Beadell to carry out forward reconnaissance in his Land-Rover by himself, and, on the basis of this, decide the best route for the road. He would then return to the rest of the group from which the bulldozer would lead off first with its driver guided by Beadell flashing a mirror (sometimes a flare was used) from the top of the Rover. The rough track was then smoothed with an ordinary road grader.”
It is entirely appropriate that one rocky outcrop in the middle of nowhere, along the Gunbarrel Highway, is named Mount Beadell. On it is a memorial which tells the story of this remarkable man.
“Len Beadell (1923-1995) was born on a farm in West Pennant Hills (now a suburb of Sydney) in 1923. After taking an interest in surveying at the age of 12, under the guidance of his surveyor-Scout master, he began a career with him on the military mapping program of northern NSW in the early stages of the Second World War. A year later he enlisted in the Australian Army Survey Corps serving in New Guinea until 1945.
“While still in the army he accompanied the first combined scientific expedition of the CSIRO into the Alligator River country of Arnhem Land carrying out astronomical observations fixing locations of their new discoveries.
“Waiving his discharge for yet another term he readily agreed to carry out the initial survey for a rocket range later to be named Woomera. This decision led to a lifetime association with that project as a civilian till his retirement in 1988.
“After 41 years including continual camping, surveying, exploring and road making – he opened up for the first time in history over 2.5 million kilometres of the Great Sandy, Gibson and Great Victoria deserts.
“He discovered the site for the succeeding Atomic test at Maralinga also laying out all the instruments needed to record the results.
“In 1958 as range Reconnaissance Officer at the Weapons research establishment he was awarded the British Empire Medal for his work in building the famous Gun Barrel Highway, the first and still the only 1500 km link east-west across the centre of Australia.
“Since then he has surveyed over 6,000 km of lonely roads in the deserts for access in establishing instrumentation for the Woomera and Maralinga trials.”
Beadell wrote a number of books including Beating About the Bush, Still in the Bush, Too Long in the Bush, Blast the Bush, Bush Bashers which were all  rich in anecdotes and stories about his adventures. There is also an excellent account of his life titled Len Beadell’s Legacy by Ian Bayly.

Woomera Prohibited Area
The Department of Defence website explains the importance of the Woomera Prohibited Area which lies beyond the village and is not open to visitors. It explains that "The Woomera Prohibited Area (WPA) is a globally unique military testing range. It covers 122 188 square kilometres in north-west South Australia, about 450 kilometres north-west of Adelaide. It is the largest land testing range in the world. The WPA is mainly South Australian Crown land covered by pastoral leases, exploration and mining tenements and native title.
"The WPA is a Prohibited Area regulated by legislation and is a Defence premise used for the testing of war materiel under the management of the Royal Australian Air Force. The WPA is an important Defence capability and testing and evaluation asset that plays a significant role in Australia’s national security.
"The WPA is also highly prospective and the South Australian Government and Geoscience Australia have previously assessed that about $35 billion worth of iron ore, gold and other mineral resources are potentially exploitable from within the WPA over a 10-year period.
"The WPA comprises extensive lands north of the Indian Pacific railway, from north of Watson in the south-west up to its north-west corner in the Great Victoria Desert (that stretches across the SA-WA border), across to Coober Pedy, and west of Roxby Downs down to Woomera in the south-east." For more information check out http://www.defence.gov.au/woomera/about.htm.

* Prior to the arrival of Europeans the area was home to the Kokatha Aboriginal people.

* In 1946 the Australian government received a formal request from Britain to establish a rocket range 1600 km long and 300 km wide.

* In June 1946 the first Dakota landed on the first temporary airstrip.

* Woomera was established in 1947 as a site for launching British rockets. The isolation combined with proximity to the railway siding at Pimba made it an ideal location.

* A regular RAAF courier service was inaugurated which provided travel, food, mail and supplies for people who were building the range.

* Construction of the village was finished in 1953.

* From 1947-1970 Woomera was an important scientific centre with the population rising to 7,000 residents.

* In 1969 a joint USAF and Australian Defence Force communications facility was established nearby at Nurrungar.

* In 1980 the Anglo-Australian Joint Project at Woomera was closed down.

* In 1982 the general public were allowed to enter Woomera Village.

* In 1991 the RAAF's Aircraft Research and Development Unit (ARDU) took over the instrument range from Defence Science and Technology Organisation (DSTO).

* By 1999 the joint USAF and Australian Defence Force communications facility at Nurrungar was closed down.

* In 1999 Woomera was opened as the Woomera Immigration Detention Centre for asylum seekers.

* In 2003 the Woomera Immigration Detention Centre for asylum seekers was closed.

* In 2010 Woomera was involved in the return of the Hayabusa Deep Space Probe.

* In 2014 it became known as the RAAF Woomera Range Complex.

* RAAF Base Woomera was established in 2015.

* The census of 2016 revealed that there were 146 people living in Woomera Village. 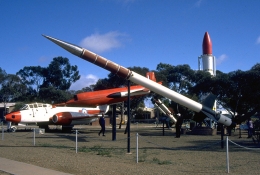 The Woomera Aircraft and Missile Park 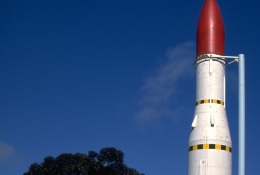 The Black Arrow rocket in the Woomera Aircraft and Missile Park 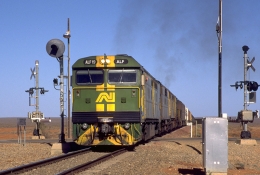 A goods train passing through Pimba 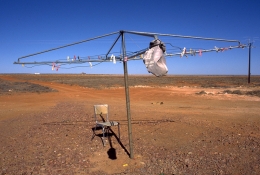 A forlorn clothes line and a flat landscape at Pimba