The appeal of Wudinna lies not in the town, which is a typical wheatbelt town dominated by the grain silos and the railway, but in the extraordinary natural beauty of the area to the north of the town which is dominated by the Gawler Ranges National Park. The Gawler Ranges and the desert areas around them are one of the great hidden treasures of outback Australia with the impressive Organ Pipes formation, the wave-like Pildappa Rock and the truly remarkable pristine white salt of Lake Gairdner.

Wudinna is located 564 km north-west from Adelaide and 259 km west from Port Augusta on the Eyre Highway.

The town is named after Weedna Hill which was the site of the first land claim in the area. It was made in 1861 by Robert George Standley. It is said that 'weedna' later was corrupted to Wudinna which may be an Aboriginal word meaning 'the granite hill'.

The Australian Farmer Sculpture
This impressive granite sculpture was designed and sculpted by Marijan Bekic as a symbolic representation of all Australian farmers. It was crafted from two pieces of local pink granite over a 17 year period. One side of the sculpture is male and the other side is female. It is located next to the Gawler Ranges Visitor Information Centre on the Eyre Highway.

Mount Wudinna and Turtle Rock
Located 10 km off Highway One  (the Eyre Highway), Mount Wudinna is 260 m high and covers an area of about 112 ha and Turtle Rock really does look like a huge turtle stretched out across the plains. All the rocks are believed to be remnants of a much larger granite mass which has been weathered over millions of years. The distinctive geological features of the rocks include rillen (eroded channels on the sides of the inselbergs) and tafoni (caves found on the granite outcrops).
Mount Wudinna, which is by far the largest of the granite outcrops, was first sighted by Europeans in 1844 when the explorer John Charles Darke passed through the area looking for good pastoral lands. He was fatally speared a short time later by Aborigines at Waddikee, between the present day sites of Kyancutta and Kimba.
Mount Wudinna is recognised as one of Australia's largest granite monoliths. It has an Interpretative Trail which provides a pleasant walk and information about the rock, its history, formation and local flora. At the base are picnic sites with barbecue facilities and a parking area. There is an easy walk to the top of Mt Wudinna which offers panoramic views of the surrounding countryside
The Heritage Places Database notes: "Mount Wudinna is the largest and most impressive of the granite outcrops on north-west Eyre Peninsula and is a good example of a stepped inselberg. This inselberg, together with the group of outcrops in the vicinity, displays a wide range of geomorphic features associated with granite, including rillen, domal sheet jointing, flared slopes, tafoni and spectacular examples of 'A' tents, the result of the release of compressive stress."

Gawler Ranges National Park
Lying 26 km north of Wudinna is the southern border of the Gawler Ranges National Park which was proclaimed in 2002. It is an unusual and impressive outback park which combines history, Aboriginal culture and a commitment to environmental conservation. It protects rare and threatened plants and animals, including Crimson Mallee and the Yellow-footed Rock-wallaby. As well the park has large communities of kangaroos and emus. The park is ideally traversed by 4WD vehicles but, when it has been dry, most of the roads are accessible to 2WD vehicles although they should have a decent level of clearance. For those wanting to go on an organised tour there are a number offered by Gawler Ranges Wilderness Safaris, tel: (08) 8680 2045 or check out http://www.gawlerrangessafaris.com.

The Highllghts
Organ Pipes
The Organ Pipes, formed over 1500 million years ago as a result of volcanic eruptions, are the park's main attraction. They are actually basalt columns which have been formed by the cooling and cracking of molten lava. The Organ Pipes walk (it takes around 30 minutes each way) requires a reasonable level of fitness as there are some loose rocks and slippery sections. The walk passes through open eucalypt woodland to a natural amphitheatre surrounded by these ancient basalt rock formations. For more information and downloadable maps and brochures check out http://www.environment.sa.gov.au/parks/Find_a_Park/Browse_by_region/Eyre_Peninsula/Gawler_Ranges_National_Park.

Aboriginal Culture
The Barngarla, Kokatha and Wirangu Aboriginal people have lived in and around the Gawler Ranges for over 30,000 years and still have a strong connection with the land. It is significant that their traditional ceremonies and practices are still carried out in the park.

Flora and Fauna
The Gawler Ranges are located between mallee country to the south and an arid, desert zone to the north. There are over 400 different plant species in the park and many are located at the extremity of their geographical distribution. Other plants such as the Gawler Ranges Hop Bush and the Gawler Ranges Grevillea are unique to the area. The Gawler Ranges is home to a wonderland of wildlife including the Australian Ringneck Parrot, the Superb Fairy-wren and Australia’s only protected population of the Short-tailed Grasswren, a shy creature which relies on spiny shrubs and bushes for protection from predators. The park is also home to colonies of Yellow-footed Rock-wallaby, the delightful Southern Hairy-nosed Wombat, the Central Long-eared Bat and flocks of Major Mitchell Cockatoos.

Bushwalking
There are only a few marked walking trails in the Park but the land is sufficiently open that experienced bushwalkers can carve their own routes through the area. There is a trail from the Waganny campground (defined as an easy to moderate walk) which passes through woodlands and grasslands to a dramatic rocky outcrop which offers magnificent 180° views. It takes around 90 minutes for the round trip.

There is an excellent and detailed brochure on the Gawler Ranges National Park. Check out http://www.wudinna.sa.gov.au/webdata/resources/files/gawler-ranges-bro.pdf.

Lake Gairdner
Lake Gairdner is a huge salt lake located approximately 170 km north of Wudinna, mostly on dirt roads. It is also accessible via Mount Ive Station (see http://www.mtive.com.au/) which has a dirt road via Iron Knob which reaches the shores of the lake.
Lake Gairdner is a spectacular site with a glistening white salt pan surrounded by the blood red foothills of the Gawler Ranges. Lake Gairdner, Lake Everard and Lake Harris form the Lake Gairdner National Park which was proclaimed in 1991 to protect the unique flora, fauna and the scenic features of the area. The park covers a total of 5,507 square kilometres. Lake Gairdner is about 160 km long and it covers an area of roughly 4,300 square kilometres. It is Australia's fourth largest salt lake. It  is usually dry. There are also several small islands within the lake. The salt is over a metre thick in some parts, mostly in the southern area. There are six creeks and rivers which, when it rains, feed the lake: Garden Well Creek, Gorge Creek, Yeltabinna Creek are the most substantial. It is worth noting that the annual rainfall across Lake Gairdner ranges from a paltry 190 mm per annum near the northern shoreline to 270 mm near the southern boundary.
Lake Gairdner is acknowledged as the best site in Australia and one of the best in the world for land speed record attempts and has therefore attracted considerable international interest. The depth of salt, its stability and lack of surface irregularities over considerable distances, make it a highly sought-after location for this specialised activity.

The Geology of Lake Gairdner
The Lake Gairdner Management Plan (2004) explains: "Lake Gairdner National Park is located on the Gawler Craton, an ancient and stable landmass that has not been subject to major tectonic activity for over 1000 million years. The Gawler Craton stretches from near Tarcoola in the north, to the tip of Eyre Peninsula in the south, and was formed as a result of volcanism and igneous activity over a period of 1100 million years. The orogenic (mountain-building) activity had ceased approximately 1580 million years ago but was followed by a period of vulcanism and ash and lava flows. These extrusions, now called the Gawler Ranges Volcanics, occurred over an area of 25,000 square kilometres about 1525 million years ago. The Gawler Ranges Volcanics underlie and form the elevated southern and western boundaries of the park. A later extrusion of Hiltaba Granite took place about 1480 million years ago. The rocks are acidic, often fine grained and classified as rhyolite to dacite. The cooling history of some of the lava flows is complex, with both fast and slow periods of cooling giving rise to both large and small crystal sizes in the porphyritic dacites and rhyodacites. The thickness of the extruded Gawler Ranges Volcanics was estimated by Blissett (1975) at 1500 m ... Today, the drainage pattern is localised, with intermittent streams carrying relatively small amounts of rainfall to the lake. It should be noted that the lake does not receive its salt inflow from surface drainage but from saline groundwater which, through evaporation, deposits sodium chloride (salt) and calcium sulphate (gypsum) at the lake surface. The surface composition of Lake Gairdner varies considerably. Generally, the lake bed is made up of gypsiferous muds, clays and silts with some gypsum crystals. A layer of salt crust, mostly from 30 mm to 75 mm thick covers this. This crust, however, can range in thickness from a few centimetres to over one metre, although in the northern third of Lake Gairdner and also in parts of Lakes Everard and Harris, there is in fact no identifiable salt crust, the lake surface in most years comprising merely saline clays."

* Prior to the arrival of Europeans the around around Wudinna was occupied by the Nawu Aboriginal people who were settled right across the Eyre Peninsula.

* The first European into the area was the explorer John Charles Darke who, in 1844, passed through the area looking for good pastoral lands. He was subsequently fatally speared between Kyancutta and Kimba.

* The Wudinna area was first settled by Europeans in 1861 when Robert George Standley lodged a claim for 6,400 acres (2,590 ha) of land surrounding Weedna Hill.

* The property was sub-divided for agricultural development in 1912.

* Wudinna township was surveyed in 1915.

* The General Store and Post Office were built in 1917.

* In 1922 the South Australian government built a wall, drains, silt trap and tank on Mount Wudinna to conserve runoff water for use on nearby farms.

* In the 1990s granite blocks were quarried in the local area.

* Today Wudinna is a service centre for travellers across the Nullarbor Plain and the farmers who live on the surrounding wheat and sheep farms.

There is a useful local website. Check out http://www.wudinna.sa.gov.au. 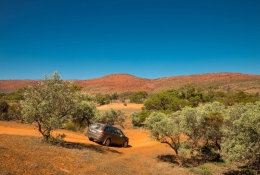 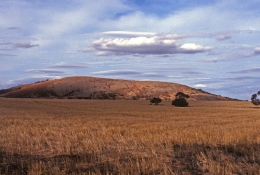 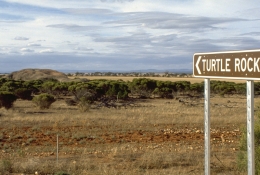 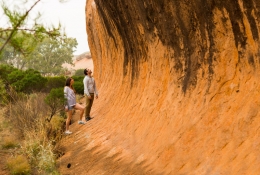 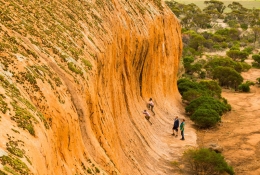 It is possible to climb to the top of Pildappa Rock which offers panoramic views across the surrounding countryside. 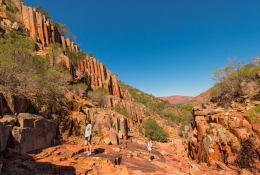 The Organ Pipes formation in the Gawler Ranges National Park. 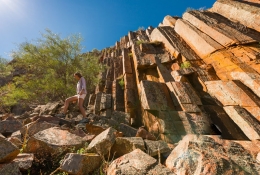 The vertical formations of the Organ Pipes in Gawler Ranges. 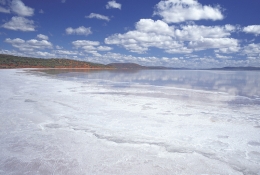 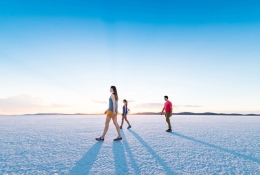 The pristine white salt pan that is Lake Gairdner.