Where five rivers meet on the muddy edge of the Kimberley

Wyndham, Western Australia's most northerly town, sits on the edge of the Cambridge Gulf surrounded by uninviting salt lakes, desert and mudflats which stretch to the horizon. It is actually two towns. There is old Wyndham (known as Wyndham Port) which lies under that part of the Erskine Range known as 'The Bastion' and, a few kilometres up the Gulf on the road to Kununurra is Wyndham Three Mile which is sometimes known as Wyndham East.
Few travel writers have been kind to Wyndham. In 1951 in The Outside Track George Farwell described the town as "a lonely pin-point of settlement upon a vast and empty landscape of tidal estuaries, mangroves, unpeopled valley floors and barren, tree-less ranges" and in 1953 Leslie Rees described the town as having "empty 44-gallon drums, beer bottles, old tins, bits of sheet iron, termite-eaten wood. A background of salt marshes and harsh, desolate hills under the torrid sun". Remarkably, in the intervening seventy years it has changed little. It is a port and it leads nowhere. It is a strange place which suffers from tropical ennui being oppressively hot and unforgiving during the summer wet season.

Wyndham, Western Australia's most northerly town, is located 3,330 km from Perth via the North West Coastal Highway, 914 km from Derby and 929 km from Darwin.

Wyndham is named after Major Walter George Wyndham (b 1857), the younger son by her first marriage of Mary Anne Broome, wife of the Governor of Western Australia 1883-1890. Wyndham was the son of Mary Anne and Captain George Robert Barker of the Royal Artillery, and changed his name to Crole-Wyndham because of an inheritance.

Five Rivers Lookout (The Bastion)
The highlight of any visit to Wyndham is the spectacular and dramatic view from Five Rivers Lookout. Access is along a road which is clearly signposted from Wyndham Three Mile and which rises to the east of the town. The view over the five rivers (the Durack, King, and Pentecost to the south, Forrest to the west and Ord to the north) and the vast mud flats which sprawl in every direction provides a remarkable panoramic view which is unique and can be fairly described as one of the most unusual and remarkable vistas in Australia.

The Big Crocodile
As the visitor enters Wyndham, at the Wyndham Three Mile, there is a huge 20 metre long, 3 metre high, concrete crocodile in the park beside the road. This ‘tourist attraction’ is an interesting example of computer technology. Designed and built in 1988 by sculptor Andrew Hickson and the students from the Wyndham TAFE, it consists of 5.5 km of steel rod, 10 rolls of bird mesh and 6 cubic metres of concrete. It was created by photographing a crocodile and having a computer at Curtin University plot 2400 mathematical coordinates of the crocodile's shape. Over the years it has received a coat of paint. It was originally a single colour - grey. Now it looks more like a crocodile with a suitably speckled underbelly. Around the time of construction Hickson, who was also responsible for the Big Ram at Wagin, commented: "We built the frame out of steel rods, covered it with chicken wire, put it onto a truck and took it out to the site. About 50 townsfolk turned up at 6.00 am one morning and when the cement truck arrived, they all helped slather six cubic metres of cement onto the frame. The job was complete about three hours later!"

Wyndham Three Mile
At Wyndham Three Mile, on Koolama Street beyond the open air cinema, the local Aboriginal population have constructed a set of huge statues depicting an Aboriginal family complete with a dingo and kangaroo. It is one block to the east of the main street and located in the Warriu Dreamtime Park. In the same street is a wonderful relic of Wyndham’s steamy nights - the Wyndham Picture Gardens Outdoor Cinema - a classic outback cinema with deck chairs,  a small screen and enclosed projector booth.

Wyndham Port
Today Wyndham Port is a remnant of its former, vibrant self. There are the old meatworks buildings and a small display of the trains and cranes which operated on the wharf. The original 19th century landing (Anton’s Landing) was burnt down in 1944 and the wharf, which now services Wyndham Port, was first built in 1919 to coincide with the opening of the meatworks. 40 metres north of the wharf is the wreck of the Koolama which sank in 1947. It is totally submerged but a hint of its location can be determined by the swirling waters. Wyndham Port, the town, is now little more than the Police Station, the Shire Hall, the hotel, a motel and the Old Court House (on the western side of the road) which is used as the Wyndham Historical Society Museum.

Wyndham Museum
Located at O'Donnell Street, in the old Court House building, the museum contains memorabilia, journal records and photographic displays of Wyndham since European settlement in the 1880s. Check out https://www.facebook.com/Wyndham-Museum-376279729068645 for up to date information. It is open from 10.00 am - 2.00 pm daily.

Magistrate's Residence
The Magistrate’s Residence is located by turning east around the northern end of the mudflats beyond the hotel at Wyndham Port. There seems to be some confusion about the residence. Some sources claim that it was never completed because the local Aborigines harassed the builders. Others claim that the walls once rose to a height of 22 feet (6.7 metres) and that a number of magistrates lived in the residence until it was closed down in the early 1900s.

Crocodile Lookout
Cambridge Gulf is literally teeming with crocodiles. At the port (just north of the wharf) is the Crocodile Lookout but it is more historical than a reality. This used to be the site where blood from the town’s meatworks drained into the Gulf. The local crocodiles, eager for a little blood or leftover meat, would gather on the muddy banks of the river. Today the site is typical crocodile territory - muddy mangroves and muddy water - but a visitor would be lucky to see a crocodile.

The Prison Tree
Along the King River Road, which runs south-west and heads off the Great Northern Highway south of the Wyndham Airport, is a Prison Tree, a hollowed out old baobab tree which was used as a temporary lockup by the local police.

The Grotto
Located 36 km south on the Great Northern Highway to Kununurra, The Grotto (signposted at Grotto Road) is a cool and watery amphitheatre. Staircases carved out of the rock lead to a quiet water hole oasis.

Gibb River Road
One of the great adventures in the Kimberley is the Gibb River Road - 660 km of unsealed road between Derby and Wyndham. In recent times, with the popularity of 4WD vehicles, it has become so popular during the winter months that a grader is employed full time to go backwards and forwards and remove the corrugations which inevitably build up because of the traffic. The greatest problem is the Pentecost River which lies just to the south of Wyndham. It can only be traversed by trucks and 4WDs when the waters have dropped.
So what are the attractions on the road?
(a) Home Valley Station
(b) the Cockburn Ranges
(c) the secret waterholes
(d) the Aboriginal art
(e) the Windjana Gorge and the Fossil Reef
The appeal of the Gibb River Road is obvious. It traverses one of the most stunningly beautiful areas on the entire continent. The soils are rusty red. The winter days boast impossibly blue skies.
The mountain ranges – notably the Cockburn, Pentecost, King Leopold and Barnett – are starkly rugged and dramatic. The landscape, with its ghost gums, paperbarks, myriads of cockatoos, kites, eagles and crows is an endless natural wonderland.
And the night skies, so vast and so grand, sparkle with a clarity city dwellers can scarcely imagine. All you can do is make sure you are up at dawn and standing on some vantage point at sunset when the landscape colours are soft and golden and it feels good to be alive.
The Gibb River Road is about stopping and savouring, finding caves covered in ancient Aboriginal art and diving into the icy pools in the numerous gorges which cut their way through the ranges.
There are really only two requirements: your vehicle must be a high 4WD capable of crossing the Pentecost River and traversing seriously corrugated roads and you must take enough gear to be able to sleep out at night.
Of course if you really want to do it tough: there is the Gibb Challenge were crazy cyclists on mountain bikes ride the entire distance to raise money for the Royal Flying Doctor service. Everything you need to know is at https://www.australiasnorthwest.com/destination/gibb-river-road. The road is impassible during the summer months because there are a number of rivers which have to be crossed and they flood during the rainy season.

* Prior to the arrival of Europeans the area was home to Aborigines from the Djeidji, Duulngari and Aruagga tribes.

* The first European explorer in the area was Phillip Parker King who sailed the 83 ton cutter Mermaid around La Crosse Island and into the body of water he subsequently named Cambridge Gulf after the then Duke of Cambridge. King arrived in the region on 19 September, 1819. He had been given the brief to explore the far western Australian coast and discover a river "likely to lead to an interior navigation into the great continent".

* In 1879 the explorer, Alexander Forrest travelled through the area and sent back reports of the pastoral potential.

* In 1881 Solomon Emanuel and Patrick Durack sent a party to the area which confirmed Forrest's earlier assessment.

* In 1883 John Forrest, at the time the WA Commissioner of Lands, surveyed the area and hinted that the area "bore distinct indications of gold".

* By 1883 Patrick 'Patsy' Durack was overlanding 7250 head of breeding cattle and 200 horses from southwest Queensland to the area. It was the longest overlanding of cattle ever attempted in Australia and lasted 2 years and four months.

* In 1885 Wyndham was established as a port and trading station. A couple of general stores were opened and the first shipment of cattle and sheep reached the Gulf.

* By 1886 the town was booming. There were six pubs, ships landed at least 5000 miners who all headed to the Halls Creek goldfields,

* In 1886 a townsite was surveyed and gazetted. Blocks of land were sold. A number of shanties grew up along the track to the goldfields. At times there were up to 16 vessels were moored in Cambridge Gulf.

* By 1888 the goldrush at Halls Creek and Wyndham ceased to have any importance in the area.

* From 1888 it served the pastoral interests in East Kimberley.

* The Overland Telegraph Line reached the town in 1889.

* In 1900 the population of the town comprised 61 people of voting age of whom 60 voted for federation. The solitary anti-federationist never disclosed his or her identity.

* By 1912 money had virtually disappeared from the town's economy with everything being paid for with promissory notes known as 'shinplasters'  which were issued by publicans and storekeepers.

* By World War 1 the town was effectively controlled by the Duracks who owned the nearby cattle stations.

* In 1913 the WA Government started constructing the Wyndham Meatworks.

* The Meatworks were finally completed in 1919. 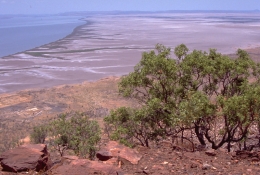 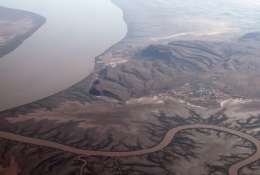 An aerial view of Wyndham Three Mile and Wyndham Port 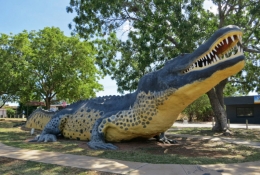 The Big Croc at the entrance to Wyndham 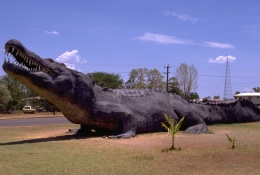 The Big Croc as it looked in 1988 shortly after it was completed. 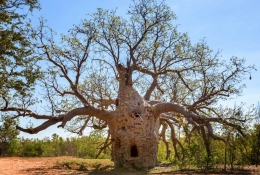 The Prison Tree, a Boab tree on the King River Road 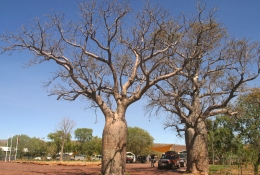 Boab trees - a natural part of the landscape around Wyndham 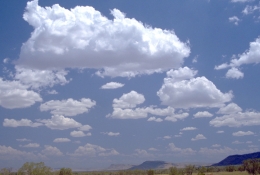 The five rivers have flattened the plains around Wyndham 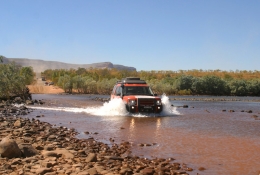 Crossing the Pentecost River on the Gibb River Road