Wyong, now part of the vast conurbation that is the NSW Central Coast, is  the administrative centre of Wyong Shire and, as such, a good base for an exploration of Tuggerah Lake (5 km west), Chittaway Point, Tacoma, Tuggerawong and the beautiful Yarramalong Valley to the west.

Wyong, which is only 12m above sea level, is located 93 km north of Sydney via the Pacific Highway and F3 Freeway.

It is believed that, in the language of the Darkinjang people who lived in the area prior to the arrival of Europeans, 'wyong' meant either 'the place of running water' or was a word applied to an edible yam.

Alison Homestead
In theory the oldest house in the Wyong shire is Alison Homestead. Charles Alison settled in the area in 1875 and built the homestead. It was extended when he married the grand daughter of Blue Mountains explorer, William Cox. The property passed out of the family in the 1890s. It was sold to a developer and was used for market gardening and dairying between 1898 and the 1970s. In 1987 it was sold to Wyong Council, the preservation of the homestead began, and it was taken over by the Wyong District Museum and Historical Society. The house, its old well and outbuildings were in reasonable condition when it was burned down in 2011 in an arson attack. It is rebuilt over a period of four years and has now returned to being an historical museum set amidst two hectares of lawns and gardens where there are picnic facilities. The museum itself is "filled with memorabilia depicting the history of the area. Barker’s Barn – full of historical equipment and machinery used in the timber, agricultural and farming industries in the area in its infancy; The Flower Shed with its extensive range of household items and the Old Schoolhouse (actually it is the Yarramalong Public School and is known as the Tom Harris Museum) set up with classroom furniture and equipment from days gone by." The museum is located at 1 Cape Road in West Wyong. The museum is open Sunday to Thursday from 10.00 am - 2.00 pm, contact (02) 4352 1886. Check out http://alisonhomestead.com.au for more details.

Chittaway Point, Tacoma and Tuggerawong
South-east of Wyong is a promontory known as Chittaway Point which spans both sides of Ourimbah Creek as it makes its way out to Tuggerah Lake. There are good views east to The Entrance, north-west to Tacoma and north over Tuggerah and Budgewoi Lakes to the stacks of Munmorah Power Station and Tacoma Reserve which is a quiet retreat in an increasingly urbanised environment. If you have a bicycle there is an excellent 12 km bike track around Chittaway Bay to The Entrance. Equally attractive is the journey out to Tacoma Reserve which runs beside the Wyong River and then turns north on Tuggerawong Road, travels beside Tuggerah Lake and back to the Pacific Motorway.

Great North Walk
The area to the west of Wyong is on the route of the 250 km Great North Walk from Sydney to Newcastle, a moderately difficult walk which usually takes between 10-14 days (it has been done in under 60 hours) it includes a wide range of environments and attractions ranging from Aboriginal rock engravings to bridges, waterways, coal mines and beautiful bushland. It was created in 1988 as a Bicentennial Project but includes tracks which had been used by Aborigines for thousands of years. It can be broken down into smaller sections. The section which includes Gosford and Wyong is known as the Hawkesbury Track and runs from Berowra to Somersby. For more information check out http://www.thegreatnorthwalk.com/ and get a downloadable map from http://www.everytrail.com/guide/great-north-walk-australia-s-best-bushwalk. The Crown Lands website has details about the Brooklyn section of the walk. Check out http://www.lpma.nsw.gov.au/about_recreation/walking_tracks/great_north_walk/sections_of_the_great_north_walk.

* Prior to the arrival of Europeans the area around Wyong was inhabited by people from the Darkinjung language group. They camped at Tacoma and in the Yarramalong Valley.

* The first European settler in the area was William Cape who received a 1000 acre grant in 1825, bordering on Jilliby Creek. He was assigned a convict to do the heavy work on the property. Each of his two sons received grants nearby and one of those properties, on the future townsite, was named Wyong Hill. Cape was so disliked he was shot by the local Aborigines.

* Cedar cutters moved into the Yarramalong and Dooralong Valleys because of the substantial stands of cedar. However transporting the timber to Sydney proved difficult.

* By the 1840s Matthew Oldbury had opened an inn at the Wyong Creek crossing to meet the demand of travellers moving north to the Hunter Valley.

* By the 1850s small allotments were being sold in the district.

* By 1860 only two Aborigines were still living at Yarramalong and by 1870 they were both dead.

* The last Aborigine at Tuggerah Lake on his bark canoe was Billy Fawkner who died in 1875.

* The Sydney to Newcastle railway reached Wyong in 1889 and shortly afterwards the Royal Hotel was established and the first post office was opened.

* By the 1890s resorts and guest houses began to appear around Tuggerah Lake.

* Subdivision occurred in the 1920s and 1930s as people took up land that was cheaper than Sydney or Newcastle. It became common to build weekenders.

* After World War II, retirees began to settle in Wyong.

* The construction of the freeway in the 1960s, and the electrification of the line, turned Wyong into Sydney's northern commuter belt.

There is an excellent brochure which can be downloaded - http://www.visitcentralcoast.com.au/brochures - and which provides good information on most the attactions, accommodation and eating destinations in the Wyong area. For Visitor Information the closest office is the The Entrance Visitor Information Centre, Marine Parade, The Entrance. Tel: (02) 4334 4213.

The Wyong Council has its own website - http://www.wyong.nsw.gov.au - which, interestingly, suggests that the greatest attractions are at The Entrance and Terrigal. 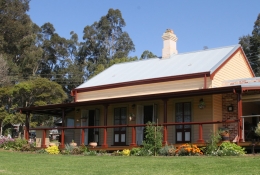 The reconstruction of Alison Homestead - the original was burnt down in 2011. 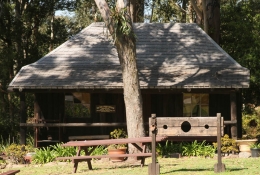 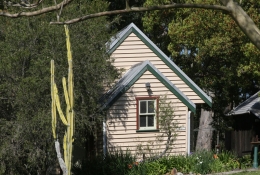