Yallingup attracts surfers searching for the perfect wave and fishermen who, in May and June, fish for the salmon which make their spawning run along this section of the coast. In recent times it has become a popular, upmarket holiday destination - idyllic and quiet - which is noted for its boutique shops, restaurants, wineries and cafes. Yallingup is one of those retreats which caters for different levels of tourism. There are surfers sleeping in their vans and overlooking the huge dunes. There are people seeking an alternative lifestyle and funding it by running restaurants, potteries, wholefood shops, small vineyards, brasseries, and exclusive chalets. And there are holidaymakers looking for comfort and stylishness. The great appeal of Yallingup is its location. The hills tumble towards the sea, the dunes rise up the hills, the beaches are edged with wildflowers and the granite foreshores set a sharp contrast to the impossibly white beaches.

Yallingup is located 256 km south of Perth via Bunbury and Busselton.

The town takes its name from a Wardandi word either meaning ‘place of love’ or 'place of caves'.

Yallingup Beach
Yallingup Beach, a long white sand beach backed by steep sand dunes which are covered in coastal bushland, is a popular surfing destination. The excellent Surf Forecast website (see https://www.surf-forecast.com/breaks/Yallingup-Beach) notes that the beach is "an exposed reef break that has reliable surf, although summer tends to be mostly flat. The best wind direction is from the southeast. Groundswells are more common than windswells and the optimum swell angle is from the southwest. Both left and right reef breaks. Good surf at all stages of the tide. Sometimes crowded. Hazards include rocks and sharks."

Caves House Hotel
Located at 18 Yallingup Beach Road, Caves House nestles into the hillside surrounded by trees and with excellent views over the Indian Ocean. When Ngilgi Cave (known at the time as Yallingup Cave) was discovered the government decided to build accommodation to cater for the visitors and tenders were called and Hough & Donald of Busselton won with a quote of £2,602. The building was completed and opened in 1903. "It was a two-storey, timber building, with an iron roof.  The accommodation included nine single and three double bedrooms, a smoking room, dressing rooms with toilets and bathrooms allowing for 24 guests in total." according to the history recorded at https://www.caveshousehotelyallingup.com.au/history. In the early days visitors were transported to the hotel by horse and buggy from Busselton. It was seriously damaged by fire in 1928 and 1929 and rebuilt in 1938. The current hotel dates from that period. It has been classified by the National Trust and the gardens have been heritage listed. For more information check out https://www.caveshousehotelyallingup.com.au.

Ngilgi Cave
Ngilgi Cave is located at 76 Yallingup Caves Road, north of Yallingup. It is 4 km from Yallingup and only one kilometre from Caves House Hotel. The cave was discovered in 1899 by Edward Dawson who stumbled upon it while searching for missing horses. The following year he conducted visitors through the cave. Dawson continued to take tour groups through the cave until he retired in 1937. The cave takes its name from an Aboriginal legend which recounts a battle between a good spirit (Ngilgi) and an evil spirit (Wolgine). The cave has an impressive array of stalactites, stalagmites, helictites and shawl formations. There is an interpretative area recording Ngilgi Cave's history as well as a cafe, playground and barbecue facilities. It is open from 9.00 am - 5.00 pm (first tour at 9.30 am, last entry at 4.00pm). Check out https://www.margaretriver.com/members/ngilgi-cave for times and tours. The website points out "Extensive boardwalks lead you through the impressive chambers of this underground wonderland, with the junior explorer's tunnel providing fun for little ones. Along the way, lighting illuminates hidden marvels and signage allows you to learn more about the remarkable variety of calcite crystal decorations. Relish the rare opportunity to handle some cave crystals at the touch table - where a guide is available to answer all your burning questions. With a constant temperature of 20°C, the cave is an ideal place to visit year round."

Surfing at Yallingup
The coast around Yallingup is famous for its excellent waves and consequently is popular, particularly with experienced surfers. The excellent Surf Forecast website (see https://www.surf-forecast.com/breaks/Yallingup-Beach) notes that the beach is "an exposed reef break that has reliable surf, although summer tends to be mostly flat. The best wind direction is from the southeast. Groundswells are more common than windswells and the optimum swell angle is from the southwest. Both left and right reef breaks. Good surf at all stages of the tide. Sometimes crowded. Hazards include rocks and sharks."

Wineries in the Area
In areas like Margaret River, where there are dozens of cellar doors, it is best to refer to the specific knowledge provided by the local tourist information sites. The main Margaret River site (https://www.margaretriver.com/eat-drink/wineries) provides maps, details of opening hours, phone numbers and specific websites.

Leeuwin-Naturaliste National Park
The Leeuwin-Naturaliste National Park stretches south to Cape Leeuwin for 120 km from Cape Naturaliste. It is a stretch of coastline which intersperses granite headlands and promontories with networks of caves (there is a lot of limestone in the region) and some of the most beautiful beaches along the Western Australian coast.
A good sealed road runs between Dunsborough and the lighthouse. There are a number of bush walks which start near the lighthouse.
Cape Leewin's attractions include Lookout Rock near Castle Bay which offers superb views over Geographe Bay. It was used by the whalers for sighting whales swimming up the coast. There is Curtis Bay where a sailor named Anthony Curtis used to load cattle onto his ship by swimming them out and pulling them aboard by their horns.
Further along the coast are Castle Bay and Castle Rock which were once used as a resting place for the American whalers who worked in the Southern Ocean. The whalers, having caught and killed the whales, would bring them ashore at Castle Bay where they would be processed for oil. The Castle Bay Whaling Company operated from 1845-72. There is a cairn which marks the original site. Further up the coast are the popular beaches at Meelup and Eagle Bay. The highlights of any visit to Cape Naturaliste are visits to Sugarloaf Rock (clearly signposted to the west of the cape) and Shelley Beach (to the east). Sugarloaf Rock is a dramatic rock just off the coast in an area which is rich with wildflowers. Shelley Beach is part of Bunkers Bay which, being on the eastern side of the cape, is protected  from the full force of the Indian Ocean.
Cape Naturaliste is also home to several rare species of wildflower including the Naturaliste Nancy, Dunsborough Spider Orchid, Cape Spider Orchid and Meelup Mallee. All of which are in bloom during the spring months
Between September and December it is also an ideal whale spotting location with southern right, humpback and blue whales in Geographe Bay. They can commonly be seen from Cape Naturaliste’s purpose built whale watching platform
There is a Cape to Cape Track (it was officially opened in 2001) which runs from Cape Naturaliste to Cape Leeuwin. If you are planning to walk the coast there is a book, The Cape to Cape Track Guidebook. Check out http://capetocapepublishing.com.au. There is also a dedicated website with detailed information about the track. Check out http://www.capetocapetrack.com.au/pages.asp?code=10. For more information check http://parks.dpaw.wa.gov.au/park/leeuwin-naturaliste. Of particular interest to walkers is the  'Access for More' section of the Cape to Cape Track which runs between the Cape Naturaliste Lighthouse and Sugarloaf Rock. It is suitable for wheelchairs. It is accessible at either end by vehicle. Seats are provided along the route. This is a world class trail that incorporates more than a kilometre of timber boardwalk. Yallingup is located 14 km along the track from Cape Naturaliste Lighthouse. Check http://parks.dpaw.wa.gov.au/park/leeuwin-naturaliste for more details.

Cape Naturalise Lighthouse
Located 14 km, by the coastal walk, north of Yallingup, is the Cape Naturaliste Lighthouse. By the time it has been completed in 1904, more than twelve ships had been wrecked by the dangerous reefs and strong currents which characterised Cape Naturaliste. There had been other, simpler devices to indicate where the shore was but in 1903, on a 100 m high bluff over Geographe Bay, the lighthouse was constructed. It was built from local limestone which was quarried a couple of kilometres from the site. Bullock wagons brought the material, including the lens and a turntable weighing 12.5 tons, to Eagle Bay. The stairs inside the lighthouse weere made from local wooden teak blocks. The light, powered by an incandescent vapourised kerosene lamp, was lit in 1904. Twenty years later it was upgraded to 1.2 million candles and it was automated in 1978. It has a range of 25 nautical miles, is 123 m above sea level, and currently has an intensity of 930,000 candela

* Prior to the arrival of Europeans the area was home to the Wardandi Aboriginal people.

* Caves in the area were first discovered by Europeans in 1899.

* Caves House, a superb holiday resort built by the government, was opened in 1903.

* Electricity was connected to Ngilgi Cave in 1903.

* By the late 1960s the entire Margaret River region was developing as an important wine growing area.

* Today it is an impressive holiday destination known to surfers and upmarket wine lovers alike.

There is a useful local website. Check out https://www.margaretriverwesternaustralia.com.au/locations/yallingup. 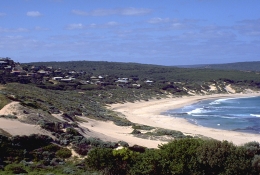 Yallingup from the nearby sand dunes 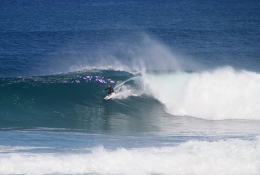 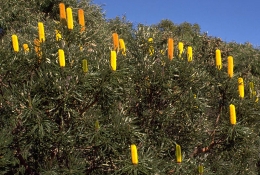 Coastal wildflowers - bottle brush - above the beach at Yallingup 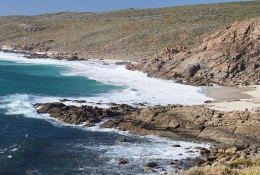 The rugged coastline is characteristic of the Leeuwin-Naturaliste National Park 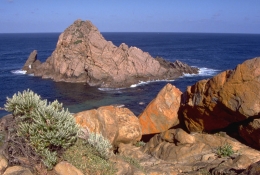