Tiny town, and access point to the coast, between Port Fairy and Portland

Yambuk is a tiny town on the road between Port Fairy and Portland. It is notable for its access - the only access on this section of the coast - to the impressive Crags Coastal Reserve with its views across to Lady Percy Island.

Yambuk is located 20 km west of Port Fairy and 304 km west of Melbourne via Geelong and Camperdown.

It is thought that 'Yambuk" was a Gundidjmara Aboriginal word meaning either "moon" or "water". It is also suggested that it might mean "red kangaroo" and "big lake". In other words, no one knows.

Yambuk Inn
Located at 4218 Princes Highway, the Yambuk Inn was once an important stopping place on the road between Port Fairy and Portland. It was constructed of bluestone in 1870-71 to replace a timber original which was erected on the same site in 1856. The present building was designed by pioneer architect Captain John Mason and features walls of squared basalt with a dormered attic. The Victorian Heritage Database notes the significance of the building: "The Yambuk Inn of 1870-71 is of architectural significance for its distinctive one and half storey form and the late representation of the persistence of early Australian colonial vernacular tradition forms in regional Victoria. The attic roof structure is evocative of early building traditions in New South Wales and Tasmania and possibly reflects local taste or the provincial practices of the Port Fairy architect and builder John Mason. The hotel is one of few surviving examples of the work of John Mason, who played many roles being at different times, an innkeeper, architect, estate agent, Captain of Militia and building contractor." For more information check out https://vhd.heritagecouncil.vic.gov.au/places/1247. The bullnose veranda was added in the early 20th century.

The Crags Coastal Reserve
Located 12 km east of Yambuk via the Princes Highway and Crags Road, the Crags Coastal Reserve has a lookout which provides views of the rocky, calcarenite cliffs and the volcanic Lady Julia Percy (Deen Maar) Island which is located 19 kilometres off shore. The Crags have been listed on the National Estate because they are the traditional homelands of the Peek Wurrung people and, as such, they have important middens and were a place of gathering, ceremony and feasting. From the lookout it is possible to observe, at a distance, Lady Julia Percy Island (it is about 6.2 million years old) which is home to an estimated 30,000 Australian fur seals (30% of the world's population), fairy penguins, birds of prey and has the largest Australian rookeries of fairy prions and driving petrels. For more information check out https://www.portfairyaustralia.com.au/attractions/the-crags.

Yambuk Lake and the Yambuk Lake Slide
Located 6 km south of Yambuk, Yambuk Lake is actually the estuary of the Eumeralla River. It is essentially a fishing lake, a caravan park, a boat ramp and a small fishing wharf. Near the boat ramp, on the eastern side of the lake, is a giant slide in the sand dunes. Surf fishing is possible from the ocean beach. The lake is part of the Yambuk Important Bird Area as it is home to the endangered Orange-bellied parrot. Its dune shrubland is also home to hooded plovers and Australasian bitterns. More than 140 species of bird have been recorded around the lake. The excellent BirdLife International Data Zone notes: "Eighteen records of Striated Fieldwren and one record each of Australian Painted Snipe, Fairy Tern and Flame Robin were obtained during 52 Atlas of Australian Birds surveys undertaken from 1998 to 2008." For more detailed information about the fauna around the lake check out http://datazone.birdlife.org/site/factsheet/yambuk-iba-australia.

Yambuk Wind Farm
Located 1.6 km west of Yambuk on Henshaws Road, the Yambuk Wind Farm was chosen for its ideal wind conditions – it has an average annual wind speed of 30km/h. Completed in 2005, the 30 MW wind farm comprises 20 wind generators which produce enough energy to meet the annual needs of 35,000 homes, with an average electricity generation of 92.6 GWh per year. The turbines have a maximum hub height of 70 metres and maximum blade tip height of 106 metres. It has been estimated that the wind farm operations abate an estimated 100,000 tonnes of greenhouse gas emissions each year. Wind farm tours can be organised through Tim on tcb3284@gmail.com or 0419 188 715. For more information check out http://www.pacifichydro.com.au/english/projects/operations/pwep/yambuk.

* The limestone cliffs to the east of town have numerous middens which indicate that Aboriginal settlement dates back at least 2300 years.

* Prior to the arrival of Europeans the area was home to Gundidjmara Aboriginal people.

* The first pastoral run in the district was taken up by Lieutenant Andrew Baxter in 1843.

* A bridge was erected across the Shaw River in 1856. A timber hotel was erected that year.

* A Catholic church was consecrated in 1857.

* An Anglican church and school were opened in 1860.

* The local school closed in 1949 and the students attended school in Port Fairy.

There is no dedicated website but the Yambuk Lake Caravan Park website gives a good overview of the region. Check out https://www.yambukcaravanpark.com.au. 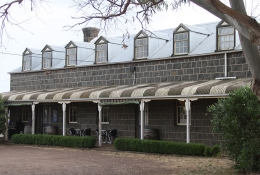 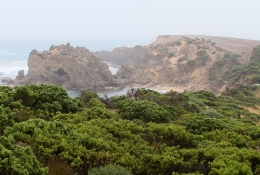 The Crags limestone formations in The Crags Coastal Reserve 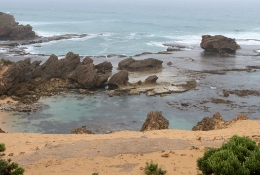 The rugged coastline from the lookout at Crags Coastal Reserve