Yarra Glen is located in the heart of the fertile Yarra Valley. It is surrounded by vineyards and, increasingly, it is becoming an attractive commuter belt area for Melbourne. The region is distinctly upmarket and consequently the main attractions are handsome cellar doors, exceptional wine tasting experiences, classy restaurants and impressive boutique providores.

Yarra Glen is situated 55 km north-east of Melbourne via the Eastern Freeway and the Melba Highway.

The town was originally known as Yarra Flats but when the railway arrived in 1889 a number of places - the railway station, the post office and the school - all changed their names to Yarra Glen. The term "Yarra", or more correctly "Yarra Yarra", was given to the river by John Helder Wedge of the Port Phillip Association. He thought, incorrectly, that it was a Wurundjeri term for "river".

Grand Hotel
Located at the heart of Yarra Glen, and clearly the town's most impressive building, is the Grand Hotel at 19 Bell Street. Built in 1888, during the boom period, this two-storey stuccoed hotel has a four-storey tower at one end, a masonry arcade along the street frontage, a cast-iron veranda and a parapet. It has been classified with the National Trust. The Victorian Heritage Database explains its significance: "The hotel is an important example of the substantial structures erected at seaside and country resorts during the boom period of the 1880s and is an important representation of this way of life now lost. Architecturally the structure is typically Boom style but is given particular distinction by the masonry arcade with iron verandah and the Italianate tower." For more information see https://vhd.heritagecouncil.vic.gov.au/places/115357. Check out http://www.yarravalleygrand.com.au/ for details.

Gulf Station
Located 1 km north of Yarra Glen at 1029 Melba Highway, Gulf Station was established as a 7000 ha grazing lease in 1847. William Bell took over the property in 1857 in conjunction with his brother-in-law Thomas Armstrong. It remained in the family until after World War II when most of the land was sold off (it is now only 16 ha) and the original buildings are little changed. The prior experience of Bell and his three sons in the Melbourne building trade helped them to construct the station buildings which are situated on land above the flood plain.
The design, planning and construction techniques utilised in the creation of this complex of ten slab-timber, ruggedly constructed, largely intact farm buildings are considered of great architectural interest. Although they are among the earliest surviving examples of their type in the area, they are in good condition and are classified by the National Trust for the strong insight they afford into 19th century Australian vernacular architecture and farm life. They all date from the late 1850s and 1860s except for the shearing shed and some additions to the original homestead. All are made of either vertical or horizontal slabs deriving from local stringybark and other eucalyptus which have been cut and adzed on-site.
The original homestead has a deeply-recessed brick-paved veranda supported by tree trunks. It has been used as a bakehouse and kitchen and a covered walkway now connects it to a more recent homestead. There are stables to the east, a piggery and butcher's shop to the north, kennels to the south and a large building to the west which contains a milking shed, blacksmith's and hay shed. To its west are more stables, to its north is an old school building, to its west is a shearing shed and to its south is a sheep-dip and slaughterhouse. There is also a collection of 19th century farming implements and a 19th century cottage garden.
The Victorian Heritage Database explains the significance: "Gulf Station is of architectural significance as one of the most complete surviving complex of farm buildings of vernacular timber construction in Victoria dating from the mid nineteenth century. The homestead demonstrates the change in vernacular building techniques over a one hundred year period while in the occupation of one family. The structures range from those of vertical timber slab with shingle roof of the 1850s, through extensions in stud frame with split weatherboards, galvanized corrugated iron and the fret cut veranda brackets of its Edwardian wing. The homestead is also significant for demonstrating the change over a century in interior finishing techniques of a relatively unpretentious dwelling." For more details check https://vhd.heritagecouncil.vic.gov.au/places/1252.
It is now run by the National Trust and is open on the first Thursday of each month from 10.00 am - 2.00 pm. It is also open on Sundays in January and February. Check out details at https://www.nationaltrust.org.au/places/gulf-station or tel: (03) 9656 9889.

Exploring the Yarra Valley Wineries
In areas like the Yarra Valley, where there are dozens of cellar doors, it is best to refer to the specific knowledge provided by the local tourist information sites. The Yarra Valley Cellar Door site (https://visityarravalley.com.au/things-to-do/wine?term_node_tid_depth%5B%5D=256) provides maps, details of opening hours, phone numbers and specific websites.

TarraWarra Museum of Art
Located at 313 Healesville-Yarra Glen Road, the TarraWarra Museum of Art. Founded in 2000 by art collectors, Eva and Marc Besen, it was the first museum of art in Australia which was funded by a private endowment. Its charter was to display Australian art from the second half of the twentieth century and consequently the collection includes works by Clifton Pugh, Jeffrey Smart, Robert Juniper, Arthur Boyd, John Brack, Brett Whiteley, James Morrison, Fred Williams, John Olsen and Russell Drysdale. The elegant gallery building is the result of a competition held between Melbourne architects with Allan Powell winning with a "design for this elegant building, arcing gently from the earth in concert with the contours and hues of the landscape ... Construction of the new museum began in 2002 and was undertaken by Probuild Constructions. The TarraWarra Museum of Art was opened by the Victorian Premier, The Honourable Steve Bracks, in December 2003. In 2004 Allan Powell was awarded the winner of the 2004 Victorian Premier’s Design Award for his design of TarraWarra Museum of Art." For more information check out https://www.twma.com.au. It is open from Tuesday to Sunday from 11.00 am - 5.00 pm. Tel: (03) 5962 3311.

Yarra Valley Dairy
The Yarra Valley Dairy, located in 100-year-old milking shed, is one of those places where the moment you walk through the door your digestive juices shift into overdrive. It offers sublime hand-made cheeses, lunches which include those cheeses, over sixty local wines, coffee and desserts. Located at 70-80 McMeikans Road, Yering it is open from 10.30 am to 5.00 pm every day, tel: (03) 9739 0023. Check out http://www.yvd.com.au for the range of cheeses and prices.

Domaine Chandon Cellar Door
The Domaine Chandon cellar door is located at 727 Maroondah Highway, Coldstream. As the Chandon website explains: "Later, in the 1960’s, the valley enjoyed a viticultural renaissance with some of Australia’s winemaking icons rediscovering the Yarra Valley, amongst them Mount Mary, Yeringberg, Yarra Yering, Wantirna Estate and St Hubert’s.  Many vineyards have since benefited from the region’s rich loamy soils, gentle fresh breezes, warm afternoon sun and cool nights; a magical combination for making exceptional wine. With its long and illustrious viticultural heritage, the Yarra Valley possessed wine quality credentials that attracted Moët & Chandon and led to the establishment of Chandon in Australia." The history, as explained on the website, was that "During the mid-1980s, in a flash of serendipity, a team of Chandon’s wine whisperers struck gold at Green Point, an old dairy farm in Victoria’s Yarra Valley. The cool climate and great soil combined to make a picture-perfect home for Domaine Chandon. Since 1986, this is where Australia’s leading méthode traditionnelle producer has been confidently crafting sparkling and still wines that are stamped with the distinct style that is Chandon." The cellar door is definitely worth experiencing. This is a classy (as you would expect) Chandon tasting experience - with both tours and an excellent tasting bar. The Green Point Room offers light lunches and the "Chandon Experience". Check out https://www.chandon.com.au for more information. The Tasting Room is open from 10.30 am - 4.30 pm daily.

* Prior to the arrival of Europeans the Yarra Valley was known as Billanook to the Wurundjeri Aborigines who lived in the area.

* European settlement began in the late 1830s after Robert Hoddle surveyed the area.

* One of the first properties in the district was Yering station which was established in 1837 by William, James and Donald Ryrie.

* In 1838 the Ryrie brothers started the area's first vineyard.

* Novelist Joseph Furphy (aka Tom Collins) was born in a wattle-and-daub hut at Yering station in 1843. He may have been the first white child born in the district.

* The first wine in the valley was produced in 1845 by the Ryrie brothers.

* Paul de Castella, a native of Switzerland, purchased Yering in 1849. He expanded the vineyard from half a hectare to 40 ha.

* In 1856 Yarra Glen was included in the Eltham Road District.

* William Bell took over Gulf Station in 1857 in conjunction with his brother-in-law Thomas Armstrong. They supplied goods to travellers en route to the goldfields at Woods Point.

* A major road from Melbourne to Woods Point was carved through the Yarra Valley c.1860.

* The Grants Land Act enabled the resumption of land for closer settlement and, as a result, the postal town of Burgoyne and the village stop of Yarra Flats emerged.

* In 1889 the railway line was extended to Yarra Flat from Lilydale, crossing the Yarra River near Yarra Glen on a wooden bridge nearly 2.5 km in length. The railway station was named Yarra Glen and, later that year, the post office and Yarra Flats school also adopted the new name.

* In September 1889 Yarra Glen was officially adopted as the new name of the settlement which incorporated the old settlement of Burgoyne.

* In 1893 David Syme, the owner and publisher of The Melbourne Age, bought View Hill estate, expanded it so that it covered the land between the Yarra Glen racecourse and the Healesville racecourse, and renamed it 'Tarrawarra'.

* The district was badly affected by the Black Friday bushfires in 1939.

* In 1958 Yarra Glen became part of the Healesville Shire.

* During the 1980s the town became popular with commuters.

* In 2009 the Black Saturday bushfires killed 13 people in the district.

The official site for the district can be located at https://visityarravalley.com.au. 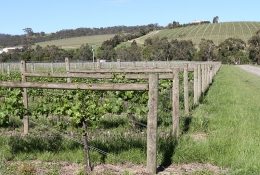 A vineyard in the Yarra Valley near Yarra Glen 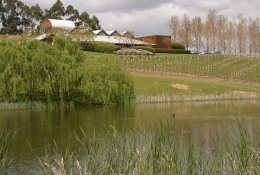 The elegant TarraWarra Museum of Art 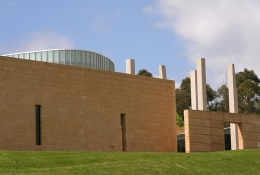 TarraWarra Museum of Art - “an elegant building, arcing gently from the earth in concert with the contours and hues of the landscape”. 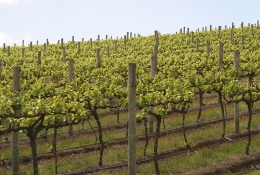 The vineyard at TarraWarra 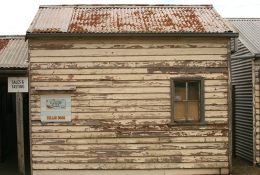 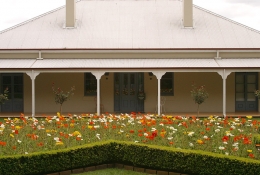 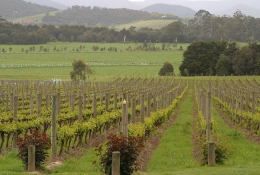 The vines at Domaine Chandon