Yarra Junction winds its way along the Warburton Highway between Warburton and Lilydale. It is a mixture of local service centre businesses and shops designed to attract the many Melburnians who make a day trip to the valley. It is an area of great scenic beauty - a 1903 guide book described the surrounding countryside as "a series of magnificent fern trees, gullies, and forest ranges in their primeval state ... with scenery unsurpassed for grandeur in Australia."

Yarra Junction is located on the Warburton Highway 69 km east of Melbourne.

The town's name is a combination of "Yarra" from the entire valley and "Junction" because it was where the 36 inch gauge of the Powelltown timber tramway met the standard gauge of the Victorian Railway. It also was possibly named because the junction of the Yarra and Little Yarra Rivers is nearby.

Upper Yarra Museum
Located in the Old Yarra Junction Railway Station at 2415 Warburton Highway, the Upper Yarra Museum was originally the Lilydale Station (which dates from 1886) and was moved to Yarra Junction in 1914. The history of the railway station is recorded in an Upper Yarra Valley Historical Society brochure: "When the railway line to Warburton was opened in 1901 a small shed-like station was provided at Yarra Junction. In 1914, when an island platform was required at Lilydale, a new station was erected there. It was intended to move the old Lilydale station to Yarra Glen but this Victorian Railway's plan was disrupted when the original Yarra Glen station was accidentally burned down in 1914. It became a matter of urgency to provide another station at Yarra Glen but, as the new Lilydale station was not yet completed, the old station could not be transferred. As a result, a completely new building was constructed at Yarra Glen. When the new Lilydale station was finally completed later in 1914, the Victorian railways cast their eyes around for another suitable place to locate the old building. Yarra Junction was chosen as traffic through that station was increasing dramatically with the opening of the Powelltown tramway."
It is now a museum with displays relating to the pre-European indigenous groups who lived in the area, European exploration and the gold rush, timber, horticulture, railways, tourism, transportation and the early years of sawmilling. It is open Wednesdays and Sundays from 11.00 am to 4.00 pm. It is located on the highway and group tours are available by appointment, tel: 0427 707 730 or (03) 5967 2167. Check out http://upperyarramuseum.org.au/ for more details.

The Lilydale to Warburton Rail Trail
When the weather is fine and cool it is amazing to see the number of happy cyclists on the Lilydale - Warburton Rail Trail, a brilliant conversion of the old railway line which runs for 38 km and which is open to people who want to walk, to ride a bicycle or to ride a horse. The railway line was built in 1901 primarily to carry fruit, vegetables and timber from the area to Melbourne. In total the trail runs for 39 km from Warburton to Lilydale. As it was once a railway it has very gentle gradients making the journey through farmland, grazing land and across floodplains easy and relatively effortless.
The entire journey is broken up into sections and the section through Yarra Junction comprises the Millgrove to Wesburn segment (1.7 km) which is followed by the Wesburn to Yarra Junction section (3.4 km) which is a particularly attractive section of the trail. It crosses the Little Yarra and offers fine views over the Central Highlands and Yarra Ranges National Park. This section finishes at the Upper Yarra Junction Museum. The Yarra Junction to Launching Place section (2.2 km) cuts back and forth across the Warburton Highway and ends at The Launching Place Hotel.  For more detailed information check https://visityarravalley.com.au/lilydale-warburton-rail-trail and download the brochure.

* Prior to the arrival of Europeans the Bunurrong and Wawurrong people of the traditional Wurundjeri-Balluk Aboriginal group lived in the area.

* The first Europeans were goldminers in the 1850s.

* By the early 1880s the area along the valley had been broken up into 10 ha blocks and the district was named Little Yarra Junction.

* The railway between Lilydale and Warburton, passing through Yarra Junction, was opened in 1901. The local post office opened that year.

* By 1910 it was sharing the administrative centre of the Upper Yarra with Warburton.

* The Upper Valley High School was opened in 1961. 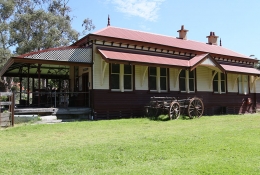 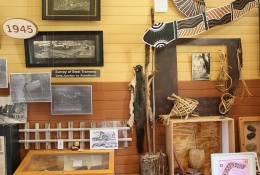 Tramway and Indigenous exhibits at the Upper Yarra Museum 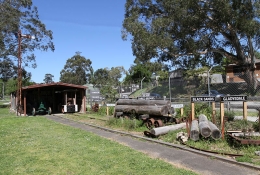 The signs of the railway stops outside the Upper Yarra Museum 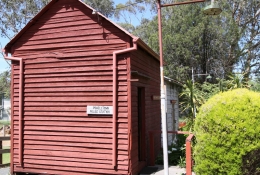 The Old Powelltown Police Station at the Upper Yarra Museum