Yarrawonga lies on the border between Victoria and New South Wales at the south-western corner of Lake Mulwala where the lake passes through the Yarrawonga Weir and flows into the Murray River. Mulwala, which is located in New South Wales, spreads along the western shore of the lake. The two towns are linked by a bridge over the mouth of the lake. Being close to a substantial lake, and famed for the fact that it gets more sunshine than Brisbane, the twin towns are now essentially a holiday resort and retirement centre.

Yarrawonga is located 281 km north-east of Melbourne via the Hume Freeway and 128 metres above sea-level.

Yarrawonga was the name given to a local pastoral station in 1842. The term is probably a Yorta Yorta Aboriginal word meaning either "place where the wonga pigeon rested" or "water running over rocks".

Lake Mulwala
Lake Mulwala, which is 1,992 km upstream from the mouth of the Murray River, was built in 1939 when the Murray was dammed at the Yarrawonga Weir as part of the Murray-Darling Irrigation Scheme. The Mulwala Canal is one of the longest irrigation channels, if not the longest, in the country. The reservoir covers 4,450 ha and has become a popular tourist attraction. Picnicking, bird watching, fishing, sailboarding, water skiing, swimming, canoeing, sailing, boating and paddle-boat cruises are all popular on the lake. Pelican Island is a breeding ground for pelicans. There are several ibis rookeries and thousands of partially submerged trees are perfect sites for breeding birds. There are boat ramps and some fine foreshore parks adjacent to the roads which hug the southern foreshore at Yarrawonga.

Skate Park and Amusement Park
In the summer months, at the Yarrawonga end of the Lake Mulwala bridge, there are huge inflatable activities - slides, pontoons and bouncing castles - and canoes placed so that people can play on them at the edge of the lake.

Cruises on Lake Mulwala
There are three cruises which operate on Lake Mulwala.
(i) MV Paradise Queen Lake Cruises - check out http://www.paradisequeen.com. The vessel is licensed to carry 75 passengers. It departs daily from the Yarrawonga Foreshore, tel: 0418 508 616.

Yarrawonga-Mulwala Pioneer Museum
Located at 151 Melbourne Street, Mulwala, the Yarrawonga-Mulwala Pioneer Museum has local memorabilia including photographs, exhibits about sport and leisure, early aviation, vintage cars, dental surgery, agricultural machinery, early forms of transport and items from the Mulwala station woolshed (1860s). It is open from 1.00 am - 4.30 pm from Wednesday to Sunday, tel: (03) 5744 1263 or (03) 5743 1091. For more information check https://mgnsw.org.au/organisations/yarrawonga-mulwala-pioneer-museum which notes "A highlight of the museum’s collection is a biplane built by local pioneer aviator Douglas Sloane in 1913. It is one of very few designs from the early period of aviation in Australia to have survived to the present day. The wing design was based on Sloane’s observations of the flight and wing structures of local wedge-tailed eagles. This was a pioneering innovation, rendered with considerable skill by a young man untrained in fine carpentry."

Yarrawonga Weir
Located on Burley Street (it actually crosses the weir), the Yarrawonga Weir is the largest of the 16 weirs on the Murray River. It was constructed between 1935-1939 and created Lake Mulwala which, when full, holds 117,500 megalitres over an area of 4,400 ha. It diverts an average of 1,900 gigalitres per year which irrigates 800,000 ha. It is located 1,992 km from the mouth of the Murray River. The Yarrawonga Channel, which runs beside the weir, distributes water to 128,000 ha of irrigated land.

Walking and Cycling Tracks Around Yarrawonga
The Visitor Information Centre has an A4 brochure which describes 11 walks and bicycle tracks around the town and beside the lake. They are:

* The Two Bridges
A pleasant 2.8 km walk across the bridge at the southern end of Lake Mulwala near the Visitor Centre and then back across the Weir Bridge on the Murray River.
* Yarrawonga Foreshore
This 4.2 km walk starts at the Visitor Centre and follows the southern banks of Lake Mulwala to the Yarrawonga Yacht Club.
* Chinaman's Island Wetlands Walk
Starting at the Yarrawonga Yacht Club on River Road, this 2 km return walk passes along the shoreline of Lake Mulwala. It is an excellent opportunity to observe the birdlife that uses the lake. There are signs along the way to help the visitor identify the birds which live in the rich wetlands. It is a delightful flat walk with excellent signage which informs the visitor that "All Three Groups of Water Birds can often be seen from this point. (1) Water fowl such as ducks, long-legged wading birds, ibis, heron and spoonbills. (2) Divers such as cormorants, pelicans, darters and grebes and (3) Marsh dwellers of shallow verges - crakes, rails and swamp hens." There is another sign with pictures of the birds that might be seen on the lake. It lists everything from masked lapwings to Eurasian coots, ravens, magpies, galahs, honeyeaters, blackbirds, sparrows, cockatoos, seagulls, spotted crakes, Buff Banded rails, Sacred Kingfishers, Black Cormorants, Pacific Ducks, Pelicans, Swans, Willy Wagtails, Dusky Moorhens, Purple Swamphens, Superb Fairy Wrens and White-plumed Honeyeaters. The island was named after a Chinese labourer, Jimmy, who worked on Wright's market garden on the western end of the island in the 1930s.
* River Walk/Cycle
A 3.2 km walk/cycle from the Visitor Centre down to the Yarrawonga Channel and then across to the banks of the Murray River.
* Green Patch Loop
A 3.5 km extension onto the River Walk which continues down the banks of the Murray River and loops through a red gum forest.
* Melbourne Street Walk, Mulwala
A walk across the bridge near the Visitor Centre and along the main road in Mulwala to the Pioneer Museum
* Mulwala Foreshore Walk to Kyffins
This 2 km walk starts at the canoe tree in Owens Bridge Park, Mulwala and makes its way along the Lake Mulwala shoreline in Kyffins Reserve.
* Kyffin Reserve Nature Walk
Located 12 km north of Yarrawonga on the Corowa Road is Kyffin Reserve, a quiet and popular area for picnickers and walkers with a pleasant one kilometre walk along the shore of Lake Mulwala. There is also an Aboriginal canoe tree on the eastern side of the reserve. Check out the Facebook page - https://www.facebook.com/pages/Kyffins-Reserve/848087458612011.
Gorman Park Walk & Cycle
Accessed from Golf Club Road on the Mulwala side of the Weir Bridge, this is a pleasant walk or cycle beside the Murray River and through the forests of Gorman Park.
Yarrawonga Regional Park
Covering 3.5 km this walk along the Murray River starts at Brownings Road and wanders around the banks taking in Chinamans Bend, Green Bank and The Common. It is a popular destination for picnickers.
Yarrawonga Historical Street Walk
Wander along both sides of Belmore Street and observe the commemorative plaques which tell the story of Yarrawonga's main street.

Byramine Homestead
Located at 1436 Murray Valley Highway, 14 km west of Yarrawonga, Byramine Homestead is a fascinating National Trust-listed country homestead built in 1842 for Elizabeth Hume, the widow of explorer John Kennedy Hume who was murdered by bushrangers at Gunning in 1840. His more famous brother, Hamilton Hume, took up the run on her behalf. The large hexagonal house with its three octagonal front rooms was designed by an English architect for use in India. It sits above an underground cellar. Ceilings, beams, floors, shutters, doors, roof shingles (now covered with galvanised iron) and the veranda are made of local Murray pine. The walls, up to 50 cm thick, are constructed of handmade bricks. The house was designed to facilitate clear visibility over the surrounding area, the front door could be defended by gunfire from within, the doors could be barricaded, there are wooden shutters for the French windows and low door handles to allow the children quick entry and, at the centre of the house, is a windowless room which served as an internal fortress. The whole is beautifully set amidst elms and currajongs planted by Elizabeth Hume. The house is open on Saturday - Thursday from 10.00 am - 4.00 pm. There are tours of the house as well as wine tasting, light lunches, Devonshire teas, and sales of vegetables, tel: (03) 5748 4321. For more information check out https://www.byraminehomestead.com.au.

* Prior to the arrival of Europeans the area was home to the Mulla Walla Aboriginal people.

* In 1838 the explorer Charles Sturt passed through the area on his way down the Murray.

* The first white settlers arrived in 1842 when Elizabeth Hume, sister of the explorer Hamilton Hume, took up a run and named her home Byramine.

* A police camp was established at Yarrawonga in 1850. That same year a punt across the Murray went into regular service.

* In 1851 gold was discovered in the central highlands.

* In 1864 a paddlesteamer, the Lady Daley, passed Mulwala.

* The village of Yarrawonga was surveyed in 1868.

* By 1874 the village was of sufficient importance to warrant a court house. That year saw the opening of the town's Post Office.

* A second survey south of the town was carried out in 1875. The town's first pub was opened.

* The first edition of the Yarrawonga Chronicle & Riverina Advocate was published in 1883.

* By 1885 the town had two banks, four hotels, three churches, a school, a newspaper and two flour mills.

* The railway from Melbourne reached the town in 1886.

* A road bridge was built across the Murray in 1891. That year saw a second newspaper published in the town.

* By 1926 the railway bridge across the Murray had been completed.

* The towns of Yarrawonga and Mulwala were linked by road and rail in 1932.

* By 1934 work had started on the Yarrawonga Weir.

* The Yarrawonga Weir and Lake Mulwala were completed in 1939 as part of the Murray-Darling Irrigation Scheme.

* An explosives factory was built in Mulwala in 1942.

* In 1957 the first of the town's aquatic festivals was held.

* A pine plantation was established to the west of town in 1958 to supply a local match factory.

* Yarrawonga has been a resort town since the early 1960s.

* In 1994 Yarrawonga was absorbed into the larger Moira Shire.

There is a local website which divides the region into Gourmet, Nature, Family, Relaxing and Fun. Check out http://www.yarrawongamulwala.com.au. There is an excellent website devoted specifically to the attractions at Mulwala. Check out https://www.visitthemurray.com.au/places-to-go/east/corowaregion/places/mulwala. 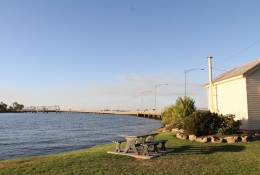 The bridge from Yarrawonga to Mulwala across Lake Mulwala 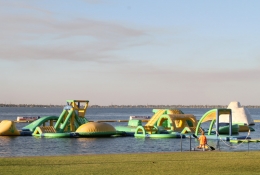 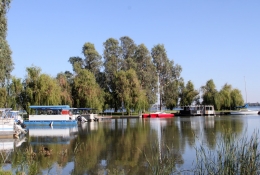 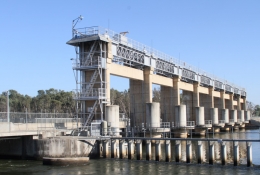 The weir separating the Murray River from Lake Mulwala 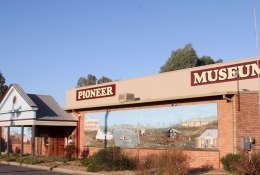 The impressive mural on the front of the Pioneer Museum 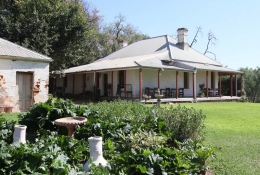 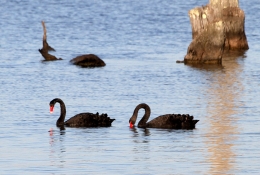 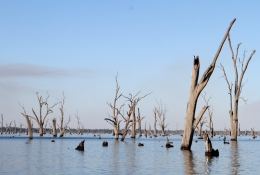 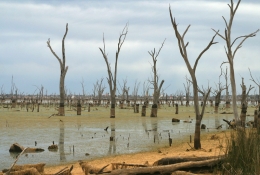 Lake Mulwala with Yarrawonga on the distant shoreline 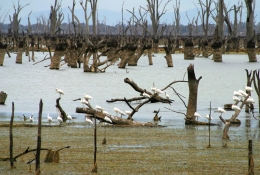 Regardless of the season the birdlife on Lake Mulwala is amazing.