Quiet town famous for its associations with Banjo Paterson

Yeoval is a quiet rural service centre on the crossroads between Dubbo, Wellington and Parkes. Like most of Cabonne Shire it is surrounded rich agricultural land known for its production of fine wool, wheat, orchards, canola, vineyards, beef cattle and fat lambs. It is a town famed for its connections with 'Banjo' Paterson who spent his first seven years on the family property, 'Buckinbah'.

Yeoval is located 355 km north-west of Sydney via the Great Western Highway. It is 47 km north of Molong.

The name of the Post Office was changed from Buckinbah to Yeoval in 1882. No one is sure where "Yeoval" originates. One theory argues that locals who had emigrated from Yeovil in Somerset simply got the spelling wrong. Another, more amusing, theory is that a shepherd was moving a mob of sheep through the town. The sheep started to run. The shepherd's daughter was sent ahead to block the mob and as she ran her father called out "Go Val" which somehow became "Yeoval".

Banjo Paterson ... more than a Poet Museum
Located at 43 Forbes Street, the Banjo Paterson ... more than a Poet Museum is the brainchild of Alf Cantrell who, over the years, has collected a genuinely fascinating collection of Paterson, and Paterson-related, memorabilia. Cantrell has a story for every piece, every photograph, every newspaper clipping and every letter in his museum. He has put this onto a a 22-stop audio guided tour but, if he is available, he is happy to talk for hours about how he acquired the memorabilia and what it tells us about Paterson's life. For more information check out http://www.banjopatersonmorethanapoet.com.au/ or tel: 0427 208 913 or 0458 464 190.

Banjo Paterson Bush Park
The Banjo Paterson Bush Park on Forbes Street at the northern end of town is a pleasant place for a picnic (and a stroll along the Poet's Walk) and it has a modern sculpture of Henry Moore. The sculpture is six metres high and weighs six tonnes. It is reputed to be one of the largest public art works in Australia.
The sculpture, made out of bronze, was created by Drago Marin Cherina, who said he felt his mentor Henry Moore was "larger than life" and wanted to reflect that with the size of the sculpture. The sculpture was donated by the famous racing family - the Waterhouses.

How the Town Acquired the Sculpture of Henry Moore
Henry Moore was an English artist who many regarded as the greatest sculptor of the twentieth century. He was the mentor to Croatian artist, Drago Marin Cherina, who worked as Moore’s assistant before travelling to Australia in 1975 to sculpt a bust of Gough Whitlam.
The story goes that Drago was a “typical bohemian artist” who loved wine, women, song and was not very good with finances.
By 1995 he was offering the New South Wales government an elaborate “Millenia Nexus” monument to celebrate the Sydney 2000 Olympics. It was to be built on a 16 ha abandoned brick-pit next to the Games site. The monument would consist of a rainforest, walkways and a dozen sculptures, all dominated by a 1,000 m tower of solar-generated laser beams.
Drago did not have enough money to complete the project and so he borrowed $47,500 to build a model and, as is the way with artists and money, somehow signed over all his artistic works to his creditor, the bookmaker Robbie Waterhouse.
Attempting to claim on his debt, Robbie Waterhouse took possession of Drago’s art works and stored them in a warehouse on Sydney’s northern beaches. Waterhouse was planning to sell them to recoup his loan.
At this point, when Drago’s world was collapsing around him, Alf Cantrell (who owns and operates the Banjo Paterson Museum) saw an opportunity. He pointed out to Waterhouse that the sculpture (in bronze) was probably worth around $1 million and that if Waterhouse was to gift it to Yeoval he could legitimately claim a $1 million tax break from the Australian Taxation Office.
Waterhouse liked the idea and so today, over the road from the Banjo Paterson Museum in the Banjo Paterson Bush Park, stands the head of Henry Moore.
How much is the sculpture really worth? Well, Waterhouse thought of selling it for scrap and reckoned its value was around $10,000. That was the value of the bronze. Drago valued it at $500,000.

Yeoval Historical Museum
Located in the town's main street and open from 9.00 am - noon on the first Thursday of each month (as well as by request, tel: (02) 6846 4478) the Yeoval Historical Museum is located next to Buckinbah Park. It was once the home of Mr and Mrs O'Halloran and was used as a store front for O'Halloran's saddlery and boot making business. The museum has memorabilia related to the history of the area. Check out https://mgnsw.org.au/organisations/yeoval-historical-museum/ for more information.

Animals on Bikes
There is an amusing attraction, which runs from Molong through to Dubbo via Cumnock and Yeoval, called Animals on Bikes. It was created by the local communities to try and draw people away from the major road from Orange to Dubbo and, quite consciously, to create a fascinating and much quieter, drive for families heading to Dubbo Zoo. It makes perfect sense. There are, at the moment, seventy five animals on bikes and  the brochure invites children to "Eye Spy" specific details on the bikes.
Described as 120 km of Paddock Art it was created mostly by members of the local community, and all the animals are on bicycles. There is a tourism map and a detailed description of each animal on a bike which can be downloaded at http://www.animalsonbikes.com.au. Some of the most impressive are wonderfully quirky ones like Elvis the Kookaburra and Flash Ralph Emu. There is a brochure available titled Animals on Bikes - Enjoy. It starts at Caldwell's Scrap Metal Yard in Molong and finishes on Obley Road, Dubbo.

Goobang National Park
Located 41 km south-west of Yeoval, the Goobang National Park has a number of campsites and walking trails. Of particular interest are the Burrabadine Walking Track at the northern end of the park and the Caloma Lookout. There is detailed information at http://www.nationalparks.nsw.gov.au/visit-a-park/parks/goobang-national-park.

* Prior to European settlement the Wiradjuri people inhabited the area.

* By the 1840s European settlers had moved into the area.

* In 1864 Banjo Paterson, as a baby, moved to Buckinbah Station near Yeoval.

* In 1871 Banjo Paterson left the district from Illalong near Yass.

* The name of the Post Office was changed from Buckinbah to Yeoval in 1882.

* In 1925 the town's railway station, on the Molong to Dubbo railway line, opened.

* The railway passenger services from the town stopped in 1974.

There is useful information at http://www.wellington-nsw.com/Yeoval.html. 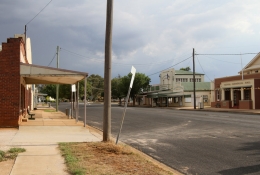 The main street of Yeoval 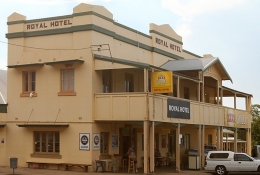 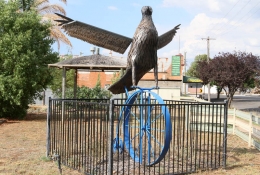 Eagle Majestic by Don Cameron in the heart of Yeoval 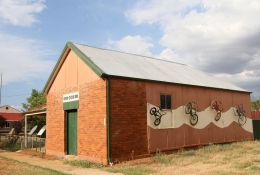 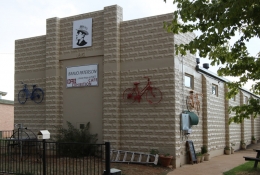 The "Banjo Paterson ... more than a poet" Museum 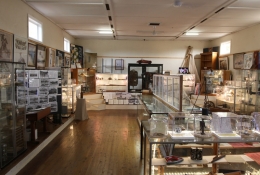 Extensive displays of memorabilia in the Banjo Paterson Museum 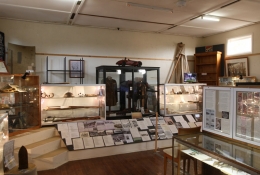 Memorabilia in the Banjo Paterson Museum 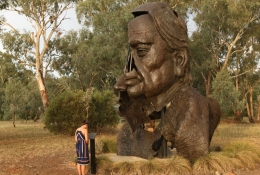 The sculpture of the head of Henry Moore 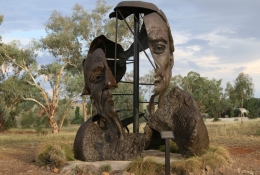 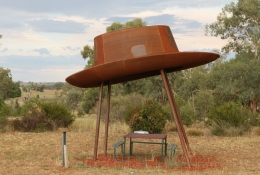 Sculpture of the Big Hat in the Banjo Paterson Bush Park 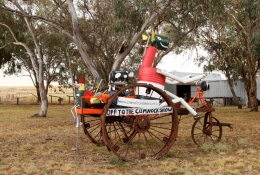 Off To The Cumnock Show - sculptor: David Weston 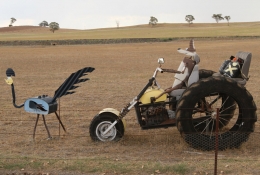 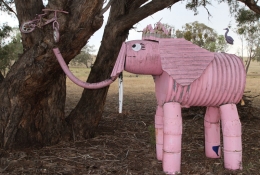 Fizzy the Elephant by Christine Weston 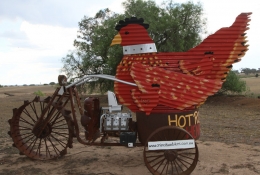 Red Hot Henny by Andrew and Rhonda Watt - near Cumnock