Yeppoon is part of the commuter belt around Rockhampton. It is also a popular holiday destination which is surrounded by attractive beaches where, for most of the year, the swimming is good and the opportunities for fishing, walking along the coast, cruising around the Great Barrier Reef, exploring the rugged headlands and relaxing are inviting. The town itself is a modern service centre for the surrounding district.

Yeppoon is located 656 km north of Brisbane and 40 km north east of Rockhampton.

No one is sure what "Yeppoon" means but it is believed to be a local Darumbal Aboriginal word meaning "the place where the waters meet". It could be a reference to the point where Yeppoon Inlet meets Ross Creek.

Shell World
Located at the Visitor Information Centre on the Scenic Highway south of the town, Shell World has impressive displays of over 20,000 shells. It also has fossil molluscs. It is open seven days from 9.00 am - 5.00 pm. Tel: (07) 4925 0085. Check out http://www.capricornholidays.com.au/destinations/yeppoon/attractions/shell-world-yeppoon for more details.

Yeppoon Beaches
The road south from Yeppoon to Emu Park is a delightful coastal journey past a number of impressive tropical beaches and through the small Capricorn Coast National Park with the dramatic volcanic plug headlands and the pleasant walks to lookouts and interesting geological features. The beaches include Yeppoon Beach, Coo-ee Beach, Statue Bay, Kinka Bay, Rosslyn Bay (which is home to the Keppel Bay Marina and departure point for Great Keppel Island), Mulabin Beach, Shoal Bay and the rocky headland Emu Point. Each beach has its own appeal. They are popular with walkers, anglers and people who swim in the winter months when the stingers are not in the area.

Capricorn Coast National Park
This is a very recent National Park. It was created in 2003 from 64 hectares of land (and is now 114 ha) stretching from Yeppoon and continuing south of Emu Park - most notably Vallis Park, Rosslyn Head, Double Head, Bluff Point, Pinnacle Point and Cocoanut Point. It is a series of coastal volcanic headlands which offer panoramic views up and down the coast. As well there are a series of walks through rich and complex tropical vegetation.
The highlights of the area include:
(i) Double Head, which has two trachyte plugs, has a walking track to Fan Rock and Rosslyn Bay Lookouts; a walking track to Pebble Beach which is a popular fishing location; access to Kemp Beach and a rock platform around Double Head.
(ii) Bluff Point, where the headland is a trachyte plug, has a 2.3 km circuit walking track up to the summit of Bluff Point. It has two viewing platforms overlooking Keppel Bay.
Both these destinations provide useful interpretative signage about the geological and natural features. For more information check out http://www.nprsr.qld.gov.au/parks/capricorn-coast/ which includes a downloadable map.

Stingers
It is worth remembering that this is an area prone to the dangers of the tropics. A sign on the Yeppoon beaches declares: 'WARNING. Swimmers are warned that potentially deadly marine stingers may be present in these waters particularly between November and March.' This effectively means that it is very unwise to swim around Yeppoon between those months. Some safety can be had by wearing a stinger suit but it is safer to swim in a pool away from the Coral Sea.

The Famous Iwasaki Resort
For those who lived through the 1960s and 1970s the Iwasaki Resort (now, sadly, temporarily closed although you can still go out and see it from the road - it lies to the north of Yeppoon) looms large in the changing post World War II relationship between Australia and Japan.
In the 1970s the Queensland premier Joh Bjelke-Petersen encouraged development of the Queensland coast. One of his most controversial projects was encouraging Japanese businessmen to invest in Queensland.
The argument at the time was simple: Japan doesn't have a lot of land. Queensland has lots of spare land. Let the Japanese invest in golf courses and tropical resorts and they will make the state rich.
It was a largely accurate analysis except that, by the late 1960s, there was still a residual of deep animosity towards the Japanese as a result of World War II. Hatred of the Japanese was visceral and the horror stories told by returned soldiers fuelled the animosity.
In 1971 Bjelke-Petersen's government announced that a Japanese syndicate headed by Yohachiro Iwasaki had acquired hundreds of hectares of beachfront land at Farnborough, just north of Yeppoon, for a resort. The Iwasaki project was so controversial that an anti-Japanese display was mounted in the front yard of the local RSL to coincide with the official beginning of construction in June 1979.
On Saturday 29 November 1980, the day of the state election, a bomb exploded at the Iwasaki Resort. Two men were charged (and subsequently acquitted).
The project proceeded and the end result was the Capricorn International Resort which although scaled down from the original proposal, had a golf course, wetlands tourist attraction and an outsize freshwater swimming pool. Today the golf course is still operational but the resort has been closed since mid-2016.

* Prior to the arrival of Europeans the coast was occupied by Aboriginal people from the Darumbal language group.

* The first European to reach the area was Captain James Cook who sailed past in the HM Bark Endeavour between 25 May and 27 May 1770. He experienced some difficulty with the shallowness of the water. During this time he named Great Keppel Island and Keppel Bay (after Admiral August Keppel) and Cape Capricorn.

* The first European settler was Robert Ross who arrived in the area in 1865. For the next 100 years the district was a fruit growing (pineapples), timber and cattle rural area.

* The town was officially proclaimed Bald Hills in 1868 and later named Yeppoon.

* The road from Rockhampton was completed in the 1870s.

* By 1882 there were only seven buildings in Yeppoon.

* The Yeppoon Sugar Company was established in 1883

* The state's first school in the town was opened in 1889. A Methodist-Presbyterian Church was consecrated in the same year.

* The railway from Rockhampton reached the town in 1909.

* The Yeppoon Fruit Growers and Local Producers' Association was formed in 1923.

* 1939 saw Emu Park and Yeppoon connected by a coast road.

* In 1945 the Great Keppel Island Tourist Company was formed to promote tourism to the island.

* By the 1950s the town had become an important pineapple growing area.

* By the 1960s holiday homes were being built by Rockhampton people eager to escape the city.

* The railway service to the town stopped in the 1970s.

* In 1971 a Japanese resort north of the town was announced. It caused considerable racial antagonism.

* By 1980 the Capricorn International Resort had been completed.

* The town's Visitor Information Centre was opened in 1988.

* During the 1990s Yeppoon grew dramatically. The population increased by 40%

* In 2003 64 ha of wetlands and forest were set aside as the Capricorn Coast National Park.

Queensland University has a detailed site on the history of the area. Check out http://queenslandplaces.com.au/yeppoon. 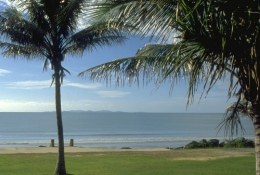 Beach at Yeppoon looking across at Great Keppel Island (1992) 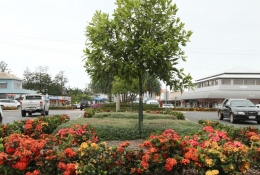 The main street of Yeppoon. 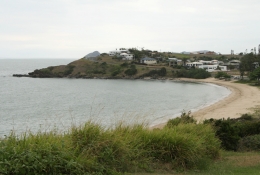 The view south from Cooee Bay 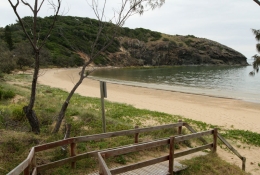 Double Head and the northern end of Kemp Beach. 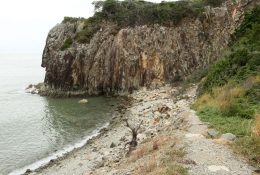