Most of Australia's capital cities have a place like York. It is a small, historic town beyond the city limits where the cafes have real quality, the buildings have all been beautifully preserved, the ambience is one of class and sophistication and yet, below the charming facade, there are lots of gift and craft shops eager for the visitor to spend money and to leave with an expensive memento of their journey. As the first township in the Avon Valley, York is full of really beautiful old buildings. It is one of the best preserved and restored nineteenth century towns in Australia. It is one of the premier historical towns in Western Australia.

In 1830 Ensign Robert Dale surveyed the new town and named it after York in England.

Walk 1 (1.5 km) highlights the commercial and administrative development of the town by inspecting 19 buildings most of which are in Avon Terrace.
Walk 2 (2 km) commences at the Old Cemetery and explores Blandstown, the area of the very early days of settlement. It includes eleven buildings and locations.
Walk 3 (2 km) focuses on aspects of York's industry and includes several schools and churches. It has 18 places of interest.
Walk 4 (6 km) "highlights the town's domestic architecture, the old Hospital and Residency Museum and includes a visit to the Mount Brown Lookout." It has eleven places of interest.

If you want a serious and comprehensive overview of the town then buy the book and give yourself a day to explore this well-preserved early nineteenth century village. If you look carefully the original Heritage Trail signage, dating from 1988, is still on many of the buildings.

York's Significant Buildings
York Court House Complex
The Court House Complex, located at 124 Avon Terrace, comprises a gaol, two court houses, a police station, stables, police quarters and a troopers cottage. It was occupied by the police until 1983 when it was taken over by the National Trust. The complex was built and extended over a 60-year period from the early 1840s until around 1910. The first Court House and Police Station were built in 1852 but the present Court House, for example, was built in 1895 and opened by Sir John Forrest. In the 1860s the high stone walls were completed and a cottage was built for troopers. The walls also enclosed the stables and a yard. It is now open every day from 10.00 am - 4.00 pm, tel: (08) 9641 2072. Check out http://www.yorkcourthouse.com.au for more details. It chronicles the evolution of the buildings in the complex.

St Patrick's Church
Located at 38 South Street, the Church of St Patrick has had a chequered career. The original Catholic Church in York was built in 1859 and dedicated in 1860. Today it is the Church Hall. The new church was started in 1875 and finished in 1886. It is a huge church which has been designed in the grand Gothic Revival style of the late nineteenth century. It features imported Italian windows. The building is credited to the architect and convict, Joseph Denis Nunan, who was an Irish patriot transported to Fremantle for seven years  for wounding a policeman.

Old York Hospital
The Old Hospital in Brook Street has become quite famous because it is reputedly a haunted house. The Haunted Spots Library website (see http://hauntedspotslibrary.wordpress.com/2013/01/25/weekly-haunted-spot-1-old-york-hospital-australia/) reports: "A former matron (who worked at the hospital in the 1920s) said “There was always something terrifying about the upstairs rooms. The hospital staff refused to go up there alone, and even when the ward was full of patients, the nurses always made their rounds in pairs.”
The hospital is a large building surrounded by trees but wildlife seems to avoid the place, rarely coming close to the structure. In recent years, the building has been turned into a hostel and rented out. Many groups who have stayed in the old hospital now turned hostel have reported terrifying paranormal experiences.
In 1980, members of a children’s athletic club and their adult supervisors stayed for a week in the hostel. Late on the first night of their stay, sounds of moaning started to come from inside the walls. The source was never found but repeated several nights in a row. The next morning, during breakfast, a large china jug levitated and smashed to the floor in front of two women.
Right after breakfast, two of the youngest children were attacked by unseen presence in the hallway. One of the girls started screaming “Hold me! Hold me! I can’t sit down! Stop them!” She was then thrown against a glass panelled door at the end of the hall. The impact was so hard it totally shattered the thick glass, gashing her arm to the bone when she tried to protect her head with her hand. She was rushed to the hospital and stitched back together to stop the bleeding. The next day, a boy went into shock when he witnessed a partial human figure materialise out of thin air with its hand on the door knob of the now broken door."
The hospital was opened in 1896 and has a shingle roof and handmade bricks. The unusual roof line, the arches and the mock Tudor gables give the building a graciousness and elegance. It could be mistaken for a grand home or a guest house. It certainly doesn’t look like a Victorian-era hospital. It is now a private home and is not open to the general public.

York Town Hall
The Town Hall, the most striking building in town, was completed in 1911 and featured colonial revival columns and ornate facades, jarrah floors, balustrates and impressive pressed tin ceilings. At the time of its construction it was said to have the largest floor area of any building in Western Australia. Located on the corner of Avon Terrace and Joaquina Street it still boasts one of the largest public halls in Australia. It currently houses the town's Visitor Information Centre.

Holy Trinity Church
The Holy Trinity Church was completed in 1854 and consecrated in 1858. The stained glass windows were designed by hugely admired Western Australian artist Robert Juniper and the High Altar and Walsingham Shrine also feature Juniper's paintings. The church contains a rare Albert Piesse pipe organ with eight bells. The Medievalism in Australia website points out that the church has "features which are characteristic of the Victorian Romanesque, Carpenter Gothic and Gothic Revival architectural styles ... based on, yet distinct from, British nineteenth-century medievalism, Australian medievalist buildings appropriated elements of medievalist design in ways which suited the Australian climate, materials and unique colonial settings. The most obvious evocation of the medieval in the design of the church ... is the castle turret. The simplicity of the church's design (both structurally and aesthetically) is typical of the Carpenter Gothic style, known for its pointed arches, towers and steep gables, as well as light-frame construction."

Railway Station
The York Railway Station in South Street is a two storey building which was constructed in 1885, extended in 1906 and classified by the National Trust in 1977. The station was built of stone, with a veranda and the stationmaster's quarters located above the station. Unusual for railway stations it has gables - two facing west and one facing north. The railway reached York from Fremantle in 1885 and the line from Albany was completed in 1889. The website - http://nationaltrustwa.tumblr.com/post/55671232286/the-york-railway-station-on-south-street-york-was has more details about the history of the station.

The Residency Museum
The Residency Museum in Brook Street is housed in an interesting three room colonial brick building which was built by convicts in the 1850s as the York Depot Superintendant's Quarters. It subsequently became the Resident Magistrate's home. It was opened as the Residency Museum in 1972. The museum contains important cultural heritage items belonging to the Balardung Noongar people; information about the early European settlers and the convict history of York; and the growth of York as well as interesting insights into the life of the local community. It is run by volunteers and is open from 1.00 pm - 3.00 pm Tuesday, Wednesday and Thursday and 11.00 am - 3.30 pm on Saturdays and Sundays. There is a downloadable brochure available at http://www.york.wa.gov.au/residencymuseum.

York Motor Museum
Located at 116 Avon Terrace, the York Motor Museum with its large number of vintage cars and horse drawn vehicles is one of York's premier tourist attractions. As the York Motor Museum website explains: "Established in December 1979, the York Motor Museum is now recognised as one of the finest private collections of Veteran, Vintage, Classic and Racing Cars in Australia. Housing the Peter Briggs collection of approximately 150 vehicles, the museum presents the evolution of motor transport with prime examples of the finest quality and workmanship from each era. These range from an 1894 Peugeot to the Williams FW07, which Australian Alan Jones drove on his way to becoming the 1980 World Grand Prix Champion." It is open seven days a week from 9.30 am to 3.00 pm in summer and 4.00 pm in winter. Tel: (08) 9641 1288. Check out http://www.yorkwa.com.au/Motor.Museum/ for details.

* Prior to the arrival of Europeans the area around York was inhabited by the Balardung Aboriginal people for thousands of years.

* The district around York was first surveyed by Ensign Robert Dale in 1830 and named after the city of York in England.

* Settlers moved into the area in 1831 and included such prominent Western Australian identities as Rivett Henry Bland and the Reverend J. B. Wittenoom.

* A township did not begin to appear until 1835–36 when an army barracks and store were built and some 50 acres of land were cleared.

* From the 1830s to the 1880s York became an important departure point for the pastoralists, sandalwood cutters and explorers exploring the eastern section of the state.

* In 1852 the first court and police station were established in the town. This was a result of the town becoming a convict depot.

* In 1886 the railway reached the town. Within two years gold was discovered at Southern Cross, Coolgardie and Kalgoorlie. Miners, prospectors and fossickers took the train to York and then made their way by any means available across the plains to the goldfields.

* It is claimed that in 1967 someone decided to remove some veranda posts in the main street. Such was the outrage from the local community that a movement started which culminated in the town being classified by the National Trust as York Historic Town.

The town's community website - http://www.yorkwa.com.au/ - has been operating since 1994 and proudly declares it was the first community in cyberspace. 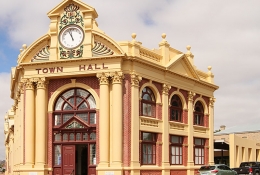 The impressive and dominating Town Hall (1911) 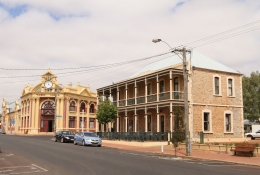 The Town Hall and Imperial Inn on Avon Terrace. 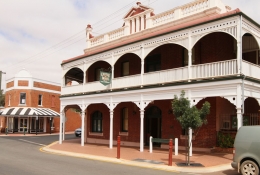 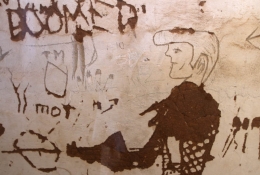 Graffiti and drawings on the cell walls of the York Gaol. 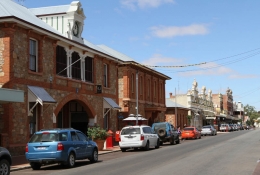 The York Post Office and Gaol Complex in Avon Terrace. 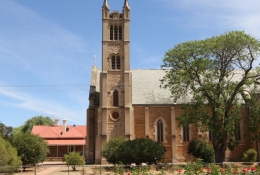 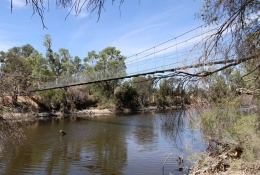 The Avon River crossed by the pedestrian suspension bridge. 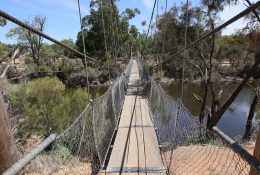 The suspension bridge across the Avon River. 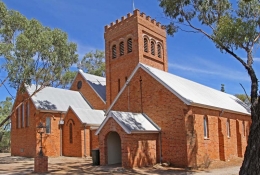