Small service town on the southern tip of the Yorke Peninsula.

Yorketown is a small rural service centre which owes its existence to the surrounding wheat, barley and sheep lands as well as the 200-plus salt lakes which, historically, were mined for salt which was shipped out from the port at Edithburgh. Today it is a sleepy, quiet town servicing the surrounding farms.

Yorketown is located 228 km west of Adelaide via the Princes and Yorke Highways.

Not surprisingly Yorketown takes its name from the peninsula although some sources, rather strangely, claim that it was the name of the surveyor who laid the town out in 1872. Prior to that it was known as Weaners Flat because the local graziers used it as the place where they weaned their lambs from their mothers. Because it is surrounded by salt lakes some wit suggested that it be named Salt Lake City but that was never anything more than an amusing suggestion.

Yorketown Historical Society
Located in the old Courthouse Building on Edithburgh Road and only open on Fridays from 10.00 am - 2.00 pm the Yorketown Historic Society has quite consciously focused on early photographs of the settlement, social life and industries in the local area. It has over 1,000 photographs in its collection. For more information contact (08) 8852 1035.

St. Columba’s Catholic Church
Located at 53 Warooka Road and built in 1903, St. Columba’s is a standout building in this small town. Its size suggests a level of prosperity which was common for the Yorke Peninsula's wheat farmers at the beginning of the twentieth century.

Salt Lakes
The main attraction is the more than 200 salt lakes which surround the town. They have been mined for their salt and like many salt lakes in wheatbelt areas (which stretch from Western Australia to western Victoria) they are vulnerable to pink algae and consequently can acquire a gentle and quite stunning pink hue under specific climatic conditions. The colouration of these saline lakes is particularly impressive on overcast days. It is caused by carotene from a type of algae.

* The area around Warooka was settled by sheep and grain (wheat and barley) farmers in the late 1840s.

* In 1872 Yorketown was laid out, blocks of land were sold and the Melville Hotel was open for business.

* In 1876 the Yorke Hotel and the Methodist Church had both been completed.

* At its peak during World War II the area produced 57,000 tonnes of salt in a single year. 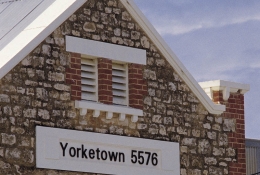 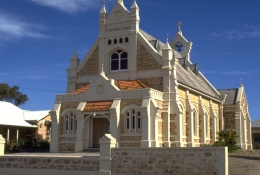 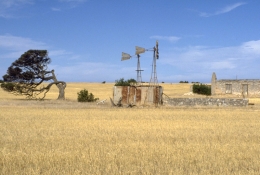 The area around Yorketown can be unforgiving - the ruins of a house and farm buildings surrounded by a field of wheat.