Zeehan is a classic "mining boom" town. Down the main street it has a run of no more than half a dozen buildings which hint at its bygone mining affluence. Sadly the former grandeur of the town's late 19th century, and early 20th century, prosperity has been been diluted with new houses, a modern library, a modern police station and the certain knowledge  that once you have wandered down the main street and explored the excellent local museum and the buildings adjoining it, you have seen everything of significance that Zeehan has to offer.

In 1642 the Dutch explorer, Abel Tasman, sighted and named Mount Zeehan after the brig in which he was sailing - although the brig was named Zeahan. Then in 1802 Bass and Flinders confirmed Tasman's importance when they named both Mount Zeehan and Mount Heemskirk after the two boats Tasman had sailed in.

The Gaiety Theatre and Grand Hotel
Successful mining towns, particularly after the years of glamour have faded, have a kind of surreal magic. Can you imagine Enrico Caruso, the greatest tenor of his generation, travelling to Zeehan? Or Dame Nellie Melba? Well, they almost certainly didn't but mythology, and a little help from the Sydney Morning Herald which reported that Caruso had performed in Zeehan, have ensured that the myth lives on. Still, at its height in the late nineteenth century, the Gaiety Theatre was the largest concert hall and theatre in Australia. It had a seating capacity for over 1,000 patrons. Constructed in 1898 the building, which housed both the Gaiety Theatre and the Grand Hotel, was built for Edward Mulcahy MHA after his previous hotel, The Royal Exchange, had been destroyed by fire. The building cost a staggering £7075, was constructed from locally made bricks, and was the venue for regular touring company performances by the J.C. Williamson company. They brought successful shows across from Melbourne and the miners filled the theatre. A favourite with the miners was the All Male Welsh Choir which packed out the theatre. The Grand Hotel charged city hotel rates (ten shillings a day) and offered city services. The theatre can be inspected by people who buy tickets to the West Coast Pioneers Museum Complex.

West Coast Heritage Centre
The West Coast Heritage Centre, located at 114 Main Street, Zeehan, combines a collection of old railway engines with a number of historic buildings on the Main Street and fifteen rooms of exhibits in the old Zeehan School of Mines and Metallurgy. The rooms include displays of historic photos, a world class mineral display, pieces of historic mining machinery, a blacksmith's shop, a marine display, a Masonic display and a Pioneer Womens Gallery. The Zeehan School of Mines opened in 1894. By 1896 it was running courses in Metallurgical Chemistry and assaying. The present building dates from 1902-03. It became a trade school in the 1930s and closed around 1960. Entry to the museum includes entry to both the Gaiety Theatre and the old Court House. For more information check out http://www.westcoastheritagecentrezeehan.com.au

Trial Harbour
Trial Harbour is located 20 km west of Zeehan. Once the port for Zeehan, it is now a holiday destination which attracts anglers and people wanting a quiet holiday.

Granville Harbour
Granville Harbour is located 35 km north-east of Zeehan. It was originally opened up as a soldier settlement after World War I. Today it is a popular fishing and holiday destination (there are few permanent residents) particularly for miners from both Queenstown and Zeehan.

* In 1642 Abel Tasman sighted and named Mount Zeehan after the brig, the Zeahan, in which he was sailing.

* Bass and Flinders on their voyage of discovery around the Tasmanian coast in 1802 named both Mount Zeehan and Mount Heemskirk in honour of the two boats used by Tasman in 1642.

* The area remained unexplored until the discovery of tin at Mt Bischoff in 1871. In the years that followed prospectors rushed to the area hoping to find similar deposits.

* In 1879 tin was discovered at Mount Heemskirk north of the present site of Zeehan. In the years that followed more than 50 companies staked claims over some 6,400 hectares of wilderness. Most of the claims were worthless.

* In late 1882 Frank Long discovered silver-lead near the present day site of Zeehan. It led to the largest mining boom on Tasmania's west coast. Long's first samples had yielded an impressive 70 ounces of silver per ton.

* By 1884 there was a paling hut, the Despatch Hut, at Zeehan and John Moyle, employed by the Despatch Syndicate, had become the first mine manager in the district.

* At its height in 1891 there were 159 companies with mining leases in the area.

* Today the town continues to prosper as a home for miners who work in the mines at Savage River and Renison Bell. 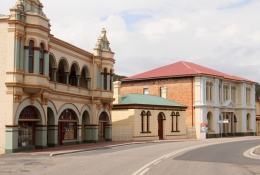 The Gaiety Theatre, Court House & Police Station and Post Office in the main street of Zeehan. 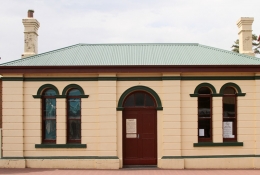 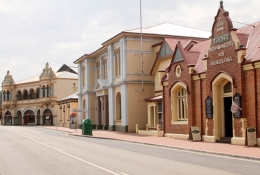 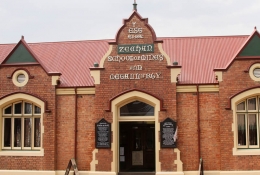 The Zeehan School of Mines and Metallurgy (1892) now the town's museum. 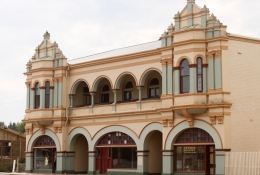 The Gaiety Theatre (1898), the largest theatre in Australia when it was built. 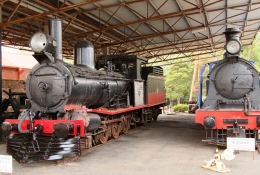 Two of the locomotives collected from around the area which now are part of the West Coast Pioneers Museum.