Although widely known because of its key location at the meeting point of Bells Line of Road and the Darling Causeway which connects with Mount Victoria and the Great Western Highway, Bell is really nothing more than a small village with a few services and a major truck checking point. Its main appeal, like many of the towns and villages in the Blue Mountains, is as a point of access to the many walks which crisscross the mountains and offer sublime views into the wild valleys of the region.

There are two routes to reach the tiny settlement of Bell. From Sydney via Richmond and Bells Line of Road is 123 km and from Sydney via the Great Western Highway to Katoomba and Mount Victoria is 129 km.

In 1823, when he was only 19, an explorer named Archibald Bell, Jr crossed the Blue Mountains on a route known today as Bells Line of Road. As a consequence of his successful crossing of the mountains there are now Mount Bell, Bells Range and Bilpin which was originally known as Bellpin.

Pierces Pass and Walls Lookout
About 10 km east of Bell, on Bells Line of Road, is a clearly signposted dirt road which heads towards the Walls Lookout Car Park (to the east) and the Pierces Pass Car Park (down the hill). Both car parks have picnic areas and there are walks to the edge of the Grose Valley. The Walls Lookout (1.2 km one way) is easy, relatively flat, and offers excellent views across the Grose Valley towards Bald Head and Anvil Rock near Blackheath. There are two walks at Pierces Pass. The main walk goes down into the Grose Valley while the other, take the sign to Rigby Hill, offers views across the valley to Burra-Korain Head and Burra-Moko Head.

Zig Zag Railway
Due to serious fires in 2013 the railway is currently not running. Check the website for details. When it is running the following information is accurate. If you are travelling with children a stopover at the Zig Zag railway (on Bells Line of Road 10km west of Bell) is an enjoyable train journey, particularly if the Thomas the Tank Engine journey is being offered. The regular Zig Zag service, which costs $18.00 for adults, $9.00 for children and $50.00 for families, departs six times daily starting from 9.40am and finishing at 1.40pm. It takes about 2.5 hours return. See www.zigzagrailway.com.au for more details. The website provides a useful potted history of the railway line. "The Zig Zag Railway was built between 1866 and 1869, and acclaimed a major engineering feat of its time. It was constructed to enable produce to be taken to Sydney from the prosperous farming areas beyond the Blue Mountains and to develop the coal and iron ore deposits found in the Lithgow Valley ... The prodigious feat of bringing the railway from the top of the mountains to the valley below was accomplished by John Whitton, Chief Engineer of the NSW Government Railways. At the time The Great Zig Zag was regarded as one of the engineering wonders of the Victorian age ... The Zig Zag consists of a series of sloping tracks forming the letter "Z" with reversing stations at Top and Bottom Points. The Top part of the 'Z' is Top Road, the middle part is Middle Road. Bottom Road is now only a short section leading to the Depot; the rest remains part of NSW State Rail network ... The track passes over three magnificent sandstone viaducts, through two tunnels. There are striking views over the surrounding countryside."

The Lost City
The Lost City is located on the Newnes plateau above Lithgow and to the north of the Zig Zag Railway station. It is one of the rarely seen wonders of the Blue Mountains. Formed by sheets of ironstone sandwiched between layers of sandstone the formations have weathered so they look like a series of dramatic, conical Asian pagodas. The sandstone was laid down by a massive river delta that flowed across the area about 230-250 million years ago. No one knows where the iron came from or how the formations occurred. It is not easy to find and, as such, is a very accurately named destination. The starting point is the Bungleboori Picnic Site. From there an unmarked track, characterised by huge potholes after rainfall, leads to a car park with vistas across a landscape dotted with pagodas. It is a short walk down the hill to inspect the formations. It can only be reached by 4WD. Ask for precise directions or purchase 4WD Treks Close to Sydney which offers very precise directions and is available in the Visitor Information Centres  in the Blue Mountains. If you want to read about the unique geology of the area check out http://www.bluemountains.org.au/documents/campaigns/LinnSocPagodaPaperWash_Wray.pdf

Mount Wilson
The premier attraction in the area is Mount Wilson. It is no accident that the Bell railway station when it was opened in 1875 was originally called Mount Wilson. It was eventually changed to Bell in 1889. To see Mount Wilson, particularly in the spring and autumn, is to be reminded of how the early settlers pined for England and Europe. Here, amidst stands of superb eucalypts, are every imaginable European deciduous tree and in autumn the town and surrounds are alive with reds, oranges, browns and yellows as the leaves, bitten by the sharpness of the encroaching winter nights, turn from green and die. Mount Wilson has managed to keep itself above the tourism of the Blue Mountains. It is a very upper class retreat where cafes and gift shops do not prosper and people who love cold winters and beautiful gardens come to relive a lifestyle more in keeping with 19th century British colonialism than contemporary Australian society. Wander through the village and be amazed at how different it is, not only from the rest of the Blue Mountains but from the rest of Australia.

* it is believed that the first European to reach the area was the convict Matthew Everingham who, escaping from the Sydney basin, may have walked through the district as early as 1795.

* Today Bell remains largely unchanged since the 1880s. Its most important building is the testing site for trucks crossing the mountains. 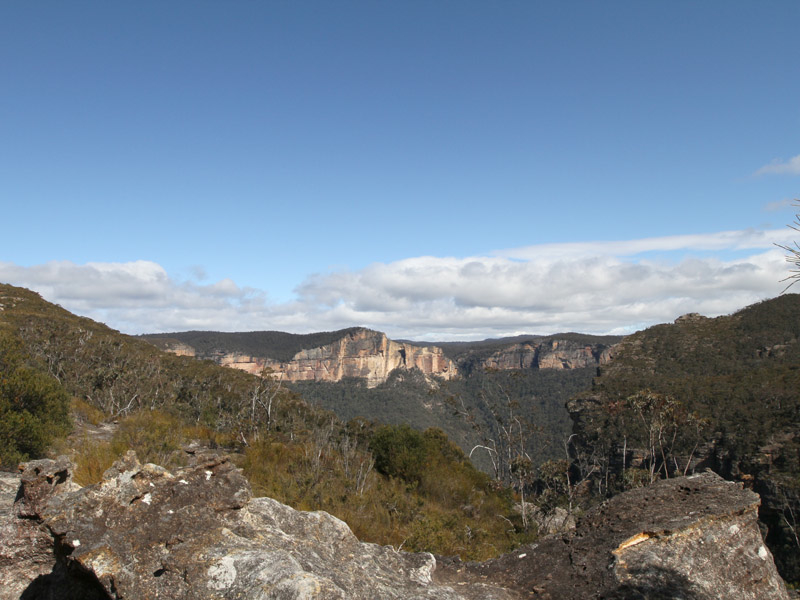 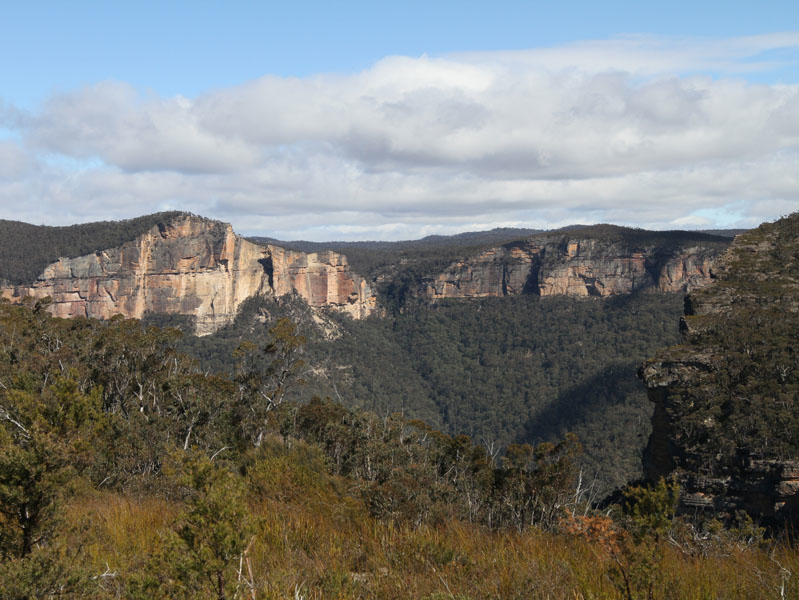 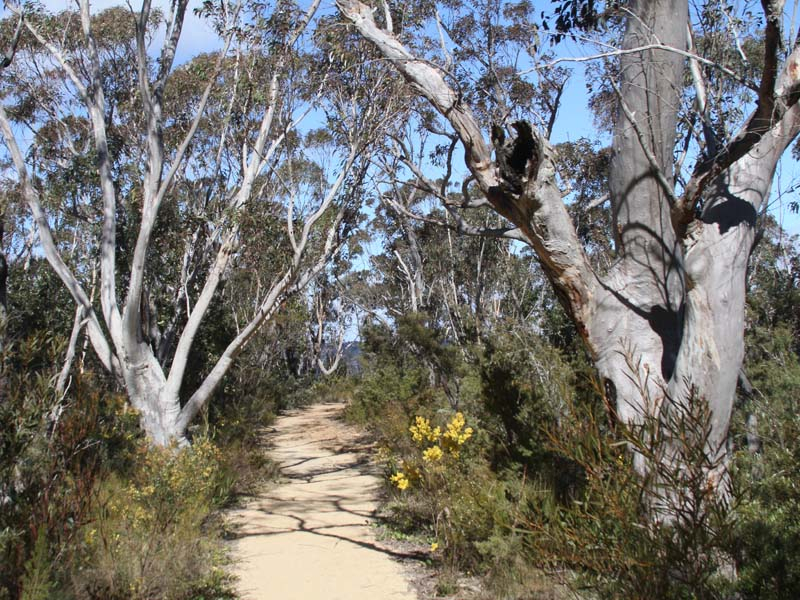 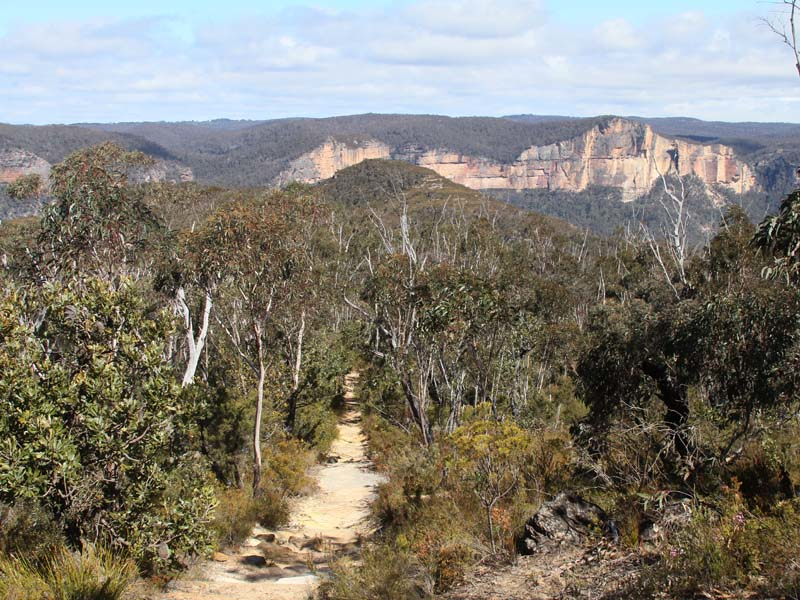 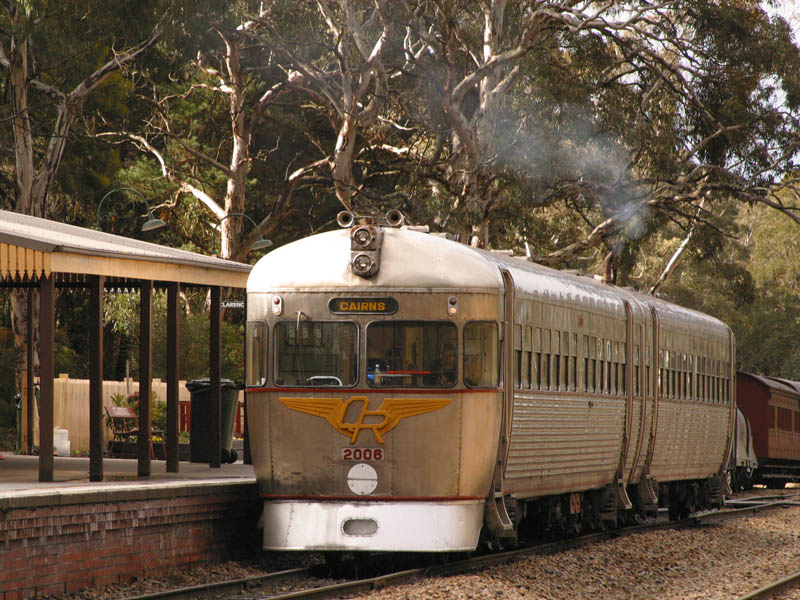 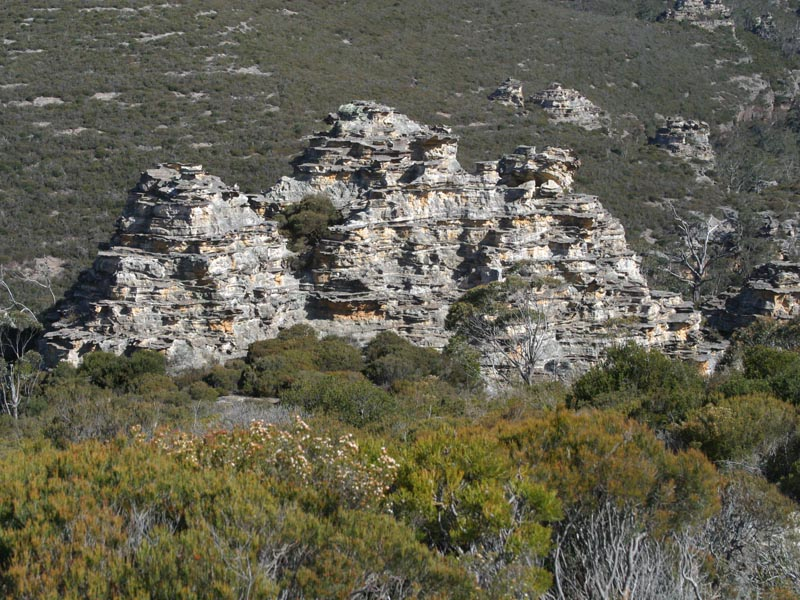