Cabramurra is a rare opportunity to inspect a Snowy Mountains Authority construction camp. It was built in 1951 and has remained a town which only exists to cater for employees of the SMA. There are no private houses in the town and it has a small general store, a pub and a service station, all of which cater primarily for the needs of the SMA staff. Its primary appeal is that it is the third highest town (Dinner Plain in Victoria and Charlotte Pass in NSW are higher) in Australia although, at only 1488 metres, that is a comment on how incredibly flat the entire continent is.

NB: Due to the bushfires the entire town is closed.

Located at 1488 m above sea level Cabramurra is "the third highest settlement in Australia'. It is located 501 km from Sydney via the Hume, Monaro and Snowy Mountains Highways. It lies 103 km from Cooma.

The town was created in 1951 as a construction camp for the Snowy Mountain Authority. It was originally known as Ghent's Camp, then as Saddle Camp until finally it was called Cabramurra, a Wiradjuri word reputedly meaning "crooked hand".

The History of the Town in Pictures
There is an interesting exhibition in the General Store of photographs which record the history of the town.

The Lookout
There is a lookout over the town which also provides one of the best views in the Kosciuszko National Park. It has picnic and barbecue facilities and is ideal to enjoy the fresh mountain air.

The Snowy Mountains Scheme
The town is owned and operated by Snowy Hydro Limited and houses Snowy Hydro’s employees who work on the two underground power stations and large dams in the area. The Snowy Mountains Hydro Electricity Scheme was started in 1949 (long before renewable energy was vital for our future) and completed in 1974. Today it has seven major power stations, 16 major dams, 80 km of aqueducts, 145 km of tunnels and a generating capacity of 3800 megawatts. Importantly it diverts waters from the melting snows that previously flowed east and heads them west down the Murrumbidgee and Murray River systems to agricultural towns which were created to avail themselves of these reliable waters. Check out Coleambally (https://www.aussietowns.com.au/town/coleambally-nsw). Snowy Hydro Limited is the National Electricity Market’s third largest generator by capacity and is mainland Australia’s largest renewable energy generator, accounting for more than 70% of renewable energy production.
Cabramurra came into existence as a rough and tumble construction town during the construction of the dams and power stations. In those days the accommodation was prefabricated huts. Since 1974 the town has been a model construction settlement with new Besser brick houses (all of which boast an interesting roof design to ensure that the snow doesn't settle), neat streets, undercover shopping and amenities designed to keep the workers happy in an environment which is typically below freezing during the winter months. The town has an average of -1.8°C in the month of July. In January 2018 it became a fly in/fly out (FIFO) town although the primary school will remain.

Man From Snowy River Country
Cabramurra is the third highest village in Australia and the township offers access to the particular beauties of the Snowy Mountains. This is dramatic country which was evocatively described by A.B. 'Banjo' Paterson in his famous poem The Man from Snowy River. It is worth reading the poem before visiting the area (see http://www.poetrylibrary.edu.au/poets/paterson-a-b-banjo/the-man-from-snowy-river-0001004). The visitor can expect lines like "the gorges deep and black", "where mountain ash and kurrajong grew wild", and, most famously "And down by Kosciusko, where the pine-clad ridges raise /  Their torn and rugged battlements on high, / Where the air is clear as crystal, and the white stars fairly blaze / At midnight in the cold and frosty sky" to come alive. Visitors should soak in the countryside where the mountain sides are impossibly steep, the gums reach for the sky, and the bottoms of the valleys seem to be an eternity away.

Tumut 3 Power Station
The descent to the spillway of Tumut Ponds Dam, which lies below Cabramurra, is dramatic (access via the Cabramurra/Khancoban Road) and, when it is open, it is possible to inspect the Tumut 3 Power Station. It was closed for an upgrade in 2016 and has not reopened for the public. Check https://www.snowyhydro.com.au/our-scheme/visit-the-scheme/ for more information.

Trout Fishing
The Snowy Mountains are famous for their excellent trout fishing. To find out more about fishing near Cabramurra check out Fontenoy Farm Cottage which provides ideal facilities and advice about trout fishing in the area. See http://www.fontenoy.com.au/fishing.

* Prior to the arrival of Europeans the Wiradjuri Aboriginal people wandered through this area in the spring and summer months.

* Cabramurra came into existence in 1951 and was known as Ghent's Camp (after the SMA worker who surveyed it) and Saddle Camp before Cabramurra was chosen.

* By 1954 simple construction houses, all of them prefabricated, had been constructed for the workers in the area.

* In 1974 the town was moved to its present site and new houses, built of Besser bricks, were constructed.

* Today the town has 269 houses which are used by Snowy Mountains Authority workers.

There is no accommodation in the town. 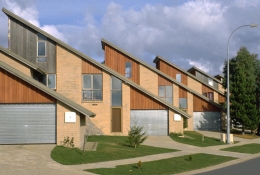 The unique housing, built in 1974, for the snowy conditions of the town. 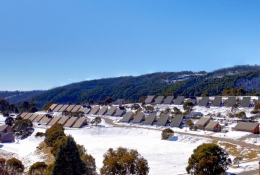 Cabramurra in the snow from the town lookout. 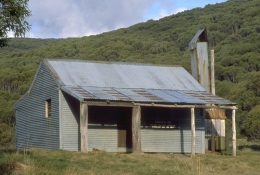