Casino is a pleasant country service centre on the Richmond River. It has a large number of interesting historic buildings, particularly in Walker and Barker Streets, which range from Victorian times through to the Art Deco era of the 1930s. Today Casino calls itself 'The Beef Capital'. It has an official Beef Week which is held each May - the 'week' actually lasts for 12 days. With a population of around 12,000 it is a thriving rural centre which relies heavily on the region's cattle industry combined with the local timber industry. To appreciate the scale of the local cattle industry the Northern Rivers Livestock Exchange is the largest saleyard in northern New South Wales.

In the late 1830s Henry Clay and George Stapleton took up land along the Richmond River. Stapleton had cut a path down to the coast from Glen Innes and, with Clay, he purchased cattle. They laid claim to 30,000 acres in the Richmond Valley and named their property 'Cassino' after the historic hillside town of Monte Cassino in Italy. It is widely believed that the town's name with a single "s" was a result of a spelling mistake on official documents.

The Richmond Valley Heritage Study
Written in 2007 this very detailed study has a lot of interesting observations about Casino on pages 20-30. See http://www.richmondvalley.nsw.gov.au/icms_docs/137833_Richmond_Valley_Heritage_Study.pdf for a very detailed analysis of the town. The most interesting and relevant observations include:

* There is a good spread of buildings particularly in Walker and Barker Streets that give the appearance of a small but prosperous rural centre, which has not been ravaged by development. Buildings range in age and style from the Victorian Post Office (1879), Court House (1882) and Commercial Bank (1893) to the Art Deco styles of the mid 1930s.

* One writer about the town argued that "no other town has such a concentration of art deco" on the east coast of Australia (what about Kyogle?).

* In the late 19th century the local council made a series of proactive decisions which ensured that only brick buildings were constructed in Barker and Walker Streets.

Federation Heritage Scenic Walk
There is an A4 brochure titled Federation Heritage Scenic Walk which can be obtained at the Casino Visitor Information Centre at 86 Centre Street. It is an unusual ten block walk (mainly around Walker Street, Barker Street and Canterbury Street) which focuses on building that, because the town is active and successful, have new proprietors and owners. It is a modern town with historic buildings which are occupied by ongoing businesses. Thus the visitor's attention is drawn to the facades. Thus there is an entry "No.24 Betta Electrical. In 1946 Mr Martin Arentz built two art deco style buildings for a new car showroom and mechanical workshop." There are a total of 25 buildings and places of interest. Some of the more interesting are as follows:

St Marks Church of England (No.2 on the Heritage Walk)
Located on the corner of Barker Street and West Street, St Marks was built in 1904 and completed in July, 1905. It was built on land donated by local property owner, Henry Barnes. This brick church replaced the original Church of England, a timber building which was built in 1871.

Hotel Cecil (No.3 on the Heritage Walk)
On the corner of Barker Street and Centre Street is the Hotel Cecil. It is a significant local hotel dating from 1919 when it was moved to its present site from its original position in Walker Street. It was cut into sections and hauled by bullock teams. Historically it has a reputation as the town's 'cattleman's pub'.

Liberty Service Station (No.3 on the Heritage Walk)
A fascinating example of Art Deco it was built by Jack Hassell in 1936 and has operated as a service station ever since then. One of the oldest, continuously operating service stations in the country. It is located on the diagonal corner from Hotel Cecil. "Two Juliet balconies, a stepped parapet, and vertical fins on the corner of the building demonstrate the distinctive nature of service stations before they became standardised."

St Marys Catholic Church (No.5 on the Heritage Walk)
Located on the corner of Centre Street and Canterbury Street, St Marys Catholic Church was completed in 1939 and consecrated in May, 1940 by the Bishop of Lismore. The bricks came from Coombell, south of Casino, and it has a distinctive Art Deco interior. The Presbytery next door was completed in 1906.

Sensational Crafts Shop - 123-125 Barker Street
A near-perfect example of the need to look at the buildings with care. Above the ground level facade is "a decorated semi-circular pediment in the centre bay, horizontal mouldings and further decoration in the former of highly detailed oriel windows." It was built in 1907.

Westpac Bank (No.16 on the Heritage Walk)
This prominent building on the corner of Barker Street and Walker Street (opposite the Commercial Hotel) was built in 1905. At the time the bank had been operating from an office in the Town Hall since 1889.

Commercial Hotel (No.18 on the Heritage Walk)
Located on the corner of Barker Street and Walker Street is the Commercial Hotel. Constructed in 1869 as little more than a timber cottage it was renovated in 1890 into the impressive hotel it is today. One of the town's premier hotels, it is now recognised as the second oldest business house in Casino.

Post Office (No.19 on the Heritage Walk)
Located in Barker Street this two-storey brick building, with some fine Classical detailing, was completed in 1879 although there has been a history of major alterations. It is a rare composition of the Victorian Italianate and Georgian Revival styles of architecture. The original building provided an office, four rooms, a kitchen and a stable. There was no fence and no bathroom. It has been altered and extended in 1889 and a second storey was added in 1916. It is a particularly impressive country post office. The building was Heritage listed in 2000.

Tattersalls Hotel
Along Barker Street beyond the Westpac Bank is the Tattersalls Hotel which was opened in 1859 and consequently is Casino's oldest extant business. It was built by the local mail contractor, John Brown, and over the past 155 years has seen the town change from a dirt bullock track to the modern centre it is today.

Court House
Located on the corner of Richmond and Walker Streets, the Casino Court House is hidden behind some mature camphor laurel trees. Some sources claim it was constructed in 1861 but Maurice Ryan's book Casino: From Crossing Place to Municipality claims that while the town did have a court house in the early 1860s that the present building was completed in 1882 and replaced an old timber building which had outlived its usefulness. It is almost hidden from the road by the trees.

Casino Folk Museum
Located in Walker Street east of the Primary School, the Casino Folk Museum was developed by the local historical society to provide guided heritage walks and to present articles and memorabilia which offer an insight into early life in the Casino area. Of particular interest are the old gazogenes or syphons for making flavoured soda water. It has a substantial collection of antiques, photographs of early Casino, Aboriginal artefacts, household items from colonial times and farming equipment. The Museum is staffed by volunteers from the Casino & District Historical Society. It is open Monday from 10.00 am - 12.30 pm; Wednesday 1.30 pm - 4.30 pm and Sunday from 10.00 am - 12.30 pm. It can be opened by appointment. Contact (02) 6662 2893.

Parks
One of Casino's most charming attractions are the parks which lie on the banks of the Richmond River. There are three parks all of which are beside the river and have easy pathways.
Memorial Park and the Cairn (No.1 on the Heritage Walk)
Memorial Park is located upstream from Irving Bridge. Located behind the swimming pool is a memorial cairn marking the place where Henry Clay and George Stapleton, in 1840, crossed the Richmond River before claiming the 30,000 acres which they named Cassino.
Webb Park
On the other side of Irving Bridge (there is a pathway under the bridge) is Webb Park, a pleasant park with plenty of shade and picnic benches.
Coronation Park
Across the river is Coronation Park which has a children's play area, barbecue and picnic facilities.

Platypus Pool and Carvings
The Platypus Pool is located below the Manyweathers Weir which is a block west of Centre Street. Webb Park on River Street has a path beside the river. The best viewing times are in the early morning or at dusk. The telltale signs are a row of bubbles in the water.The platypus is notoriously shy so seeing them is usually a combination of patience, silence and a little luck. Check out http://www.visitnsw.com/destinations/north-coast/lismore-area/casino/attractions/platypus-pool with additional details.

Casino Mini Railway
Located at the end of Summerland Road, North Casino, the Pacific Coast Railway Society Inc. offers miniature train trips every Sunday between 10.00 am and 4.00 pm. The trips are 4 km long, last about 25 minutes, leave from the North Casino station and travel through the Jabiru Geneebeinga Wetlands. For further information contact (02) 6663 3319. Check out http://www.casinominirail.org.au/about.html for more details.

* The first European to reach the mouth of the Richmond River was Captain Henry John Rous in 1828. Rous entered the river and sailed about 20 miles (32 km) upstream.

* Around 1838 a group of cedar cutters entered the lower Richmond Valley.

* The founders of the settlement in the area were Henry Clay and George Stapleton who hacked a track down to the coast from Glen Innes. The two men claimed 30,000 acres which they named "Cassino" after Monte Cassino in Italy.

* By 1842 cedar cutters were in the lower reaches of the Richmond Valley near Pelican Creek.

* By 1849 there were more than 20 squatters and a significant number of cedar-cutters in the living along the Richmond River.

* As early as 1847 Petty Sessions were being held in the valley and there was a postmaster by early 1849.

* The first evidence of a permanent settlement was at a place known as 'The Falls' in the early 1850s.

* By 1853 Assistant Surveyor W. Darke had surveyed a site for a village. That year both a General Store and a Hotel - the Durham Ox Inn - were built in what is now Richmond Street. Later that year a policeman arrived in 'The Falls'.

* In 1855 the Surveyor General, Sir Thomas Mitchell, declared the need for a town in the valley with suburban allotments and a proper subdivision. 'The Falls' which was renamed Casino and the town was officially gazetted.

* By 1857 a private school had been opened on the bank of the Richmond River near where the Irving Bridge stands.

* In 1859 a doctor arrived in the town and a second hotel, Tattersalls, was opened.

* In 1861 the town saw the opening of the first Public School.

* By 1870 a local resident, Robert Dawson, was describing Casino as "a drab little village though there were some buildings of fair pretensions" with "roads almost non-existent, only rough bush tracks being available" and "nowhere on the Richmond were there any banks, churches, newspapers or telegraph lines".

* In June 1870 the Commercial Banking Company of Sydney established a local branch. By December of that year the Richmond River Express and Tweed Advertiser was being published.

* By 1871 a Police Magistrate and Telegraph Office were operating in the town.

* In 1876 a bridge across the Richmond River was completed.

* By the 1890s Casino was in decline. Lismore had become the more important of the town centres in the Richmond valley.

There is detailed information about the town on the official website - http://www.visitrichmondvalley.com.au. There is a very good, downloadable brochure at http://svc091.bookeasy.com/images/richmond/Casino%20Activities%20Guide%20Web%20Version.pdf. 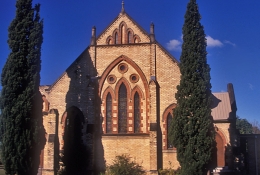 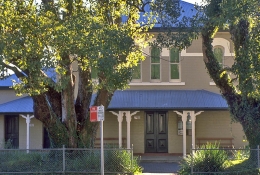 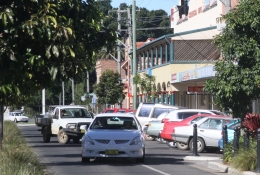 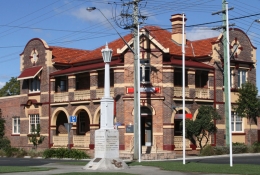 A confusion of telegraph poles outside the Westpac Bank, erected as the Bank of New South Wales in 1905, with the historic war memorial dating to the Boer War. 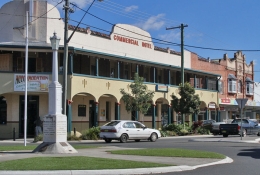 The Commercial Hotel - by the 1990s the original pub dating from 1869 had been converted into this large hotel. 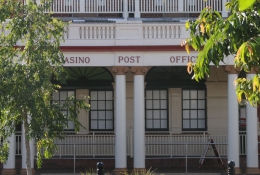 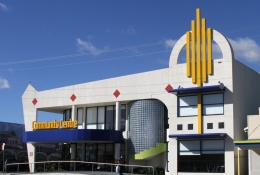 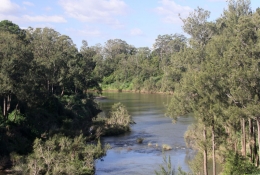 The Richmond River at Casino.