Meekatharra is a gold town in the East Murchison area which, since the 1890s when gold was first discovered, has developed into an important service centre for the pastoral and mining interests in the area. Today it is a centre of a vast shire which covers 99,974 square kilometres of semi-desert where the main activities are mining, sheep and cattle (there are only 48 properties in the shire). It has an annual rainfall of 200-250 mm. The main appeal of the town lies in the old gold mining history; a small number of interesting historic buildings; and its access to both Mount Augustus and the mining towns of Newman, Parabudoo and Mount Tom Price which lie to the north. It is widely recognised as one of the hottest towns in Australia. It recorded a temperature of 45°C in December, 1972 and had 30 consecutive days with temperatures over 100°F (37.77°C) in 1956.

It is widely accepted that 'meekatharra' is a Yamatji Aboriginal word meaning "little water" or "place of little water" which seems appropriate given the low rainfall in the area.

Meeka Rangelands Discovery Trail
This is an easy 3 km walk along both banks of the Meekatharra Creek. It includes 17 interpretative panels and offers a unique insight into the history, indigenous culture and natural attractions of the area. It starts behind the Tourist Bay at the southern end of the town's main street. Subjects on the panels include the Big Red (a local variety of kangaroo known as a bigurda); the importance of water; the hardships of the early miners; the use of indigenous medicines in the area; the local fauna and flora; the historic importance of the local blacksmith and baker; the role of the Royal Flying Doctor service and the School of the Air. Check out http://www.meekashire.wa.gov.au/meeka-creek-trail.aspx for more details and a useful map.

Meekatharra Lookout Trail
The Meekatharra Lookout, located 900 metres west of the town off Gascoyne Junction Road, provides excellent views over the town and the vast redlands of the desert that surrounds it. Check out http://www.meekashire.wa.gov.au/meeka-lookout-trail.aspx which has a detailed map and additional information.

Meekatharra Museum
Open from 8.00 am - 4.30 pm Monday to Friday, the small Meekatharra Museum has an interesting collection of photographs recording the history of the town and the surrounding district.

Meekatharra State Battery
Relocated in the Main Street in 1994 the State Battery, a vital part of the town's gold mining history, operated at Meekatharra from 1901 to 1987 and produced 208,219 ounces of gold from 290,927 tons of ore. The battery was established and run by the WA Government for the benefit of all miners.

Meekatharra Court House
The Former Court House in Darlot Street, built in 1912, is a unique attempt to deal with the oppressive summer temperatures by designing high ceilings and ventilation ducts which connect to roof vents, in an attempt to keep the court relatively cool. The Court House, which is registered as a National Trust building, was originally used as the local court house and the mining registrar's office and, as such, was central to the development of the town.

Royal Flying Doctor and School of the Air
Meekatharra is the administrative centre for the Royal Flying Doctor service and the School of the Air as well as a number of government departments including the Bureau of Meteorology (they launch weather balloons twice daily) which can be visited by contacting tel: (08) 9981 1191; the Department of Community Services, the Agricultural Protection Board, the Department of Agriculture and Homeswest. It is possible to visit the Royal Flying Doctor Service which is open from 9.00 am - 2.00 pm Monday to Friday. It is located at the Meekatharra Airport. Staff are happy to explain the workings of the base.

Peace Gorge
Located 3 km from town on the Gascoyne Junction Road, the Peace Gorge is formed by a collection of rock formations known as The Granites. It is a popular local picnic destination. At the end of World War I it was the place where townsfolk gathered to greet the returning soldiers. This is how the gorge got its name.

Meekatharra Mining Superpit
Known also as Paddy's Flat Super Pit, this huge open cut mine is estimated to be able to produce around 120,000 ounces of gold per annum from 1.5 million tonnes of ore. The pit is planned to be 5 km long and 1 km wide and is located to the east of the town. Like all gold mining operations it is vulnerable to world gold prices. Mines open and close in the Meekatharra area according to gold prices and economic viability.

Meekatharra and Wildflowers
In the spring the area around Meekatharra is one of the most spectacular in the Murchison with dramatic displays stretching across the landscape. It is notable particularly for the Sturt's Red Desert Pea. It is also commonplace to see emus, kangaroos and wedge-tailed eagles.

The Mining Ghost Towns Around Meekatharra
The tiny ghost towns of Nannine, Garden Gully, Abbotts, Gabanintha, Peak Hill and Horseshoe tell the story of gold mining in this harshest of environments.

Garden Gully, for example, lies north of Meekatharra 8 km along the Great Northern Highway. "Turn left onto the Mt Clere Road approximately 12 km. A ten head battery was erected by Haig and Lamond. The battery was later used by Carr and party (Adelaide) to treat ore from their mine 'The Crown'. 260 tonnes of ore was treated between 1897-1901 for a return of 525.11 ounces before the mine was abandoned. The most successful mine in this district was called the 'Kyarra' employing 19 men 28,936 tonnes of ore was treated for a return of 20,193.63 ounces. This was over a six year period between 1909 and 1915." Each ghost town has its own, unique story.

Mount Gould Police Station
The Mount Gould Police Station was restored by the Meekatharra Shire Council in 1987 and is registered by the National Trust. Located 156 km west of Meekatharra on the Gascoyne Junction Road it was the first police station of the Murchison. The Police Station evolved from a police camp which was established in the area in 1888 after a police constable named Christmas had left Geraldton on horseback earlier that year. The police station was completed and opened around 1890 and the following year a Sergeant Houlahan was placed in charge of the station. He was assisted by three constables. It was closed in the early 1900s. The police station and the lockup are still well preserved and have informational signage explaining their history.

Mount Augustus
Check out https://www.aussietowns.com.au/town/mount-augustus-wa. It is located 560 km north-west of Meekatharra. Mount Augustus, for all its isolation, is one of the true wonders of Australia. It, not Uluru, is the answer to that vexing Trivial Pursuit question "What is the largest monolith in the world?" or, in more simple terms, it is the largest rock on the world although some geologists dispute this claim. Rising 715 metres above the flat plains which surround it (it is 1105 m above sea level), Mt Augustus covers an area of 4,795 hectares which makes it about twice the size of Uluru.

* Prior to the arrival of Europeans the area around Meekatharra was occupied by members of the Yamatji Aboriginal language group and the Ngoonooru Wadjari and Yugunga-Nya people.

* The first European expedition into the area was led by Robert Austin in 1854. He discovered gold, reported it to the authorities, but his report was not publicly released.

* By the 1870s there were a small number of pastoralists in the area.

* In 1888 the Mount Gould Police Station was established 156 km west of Meekatharra.

* Meekatharra came into existence in the early 1890s when gold was discovered in the area.

* By 1891 gold was being mined at both Nannine and Annean Station.

* The Peak Hill field was opened up in 1892 and by 1894 a ten-head battery had been built to crush and process ore at Garden Gully.

* The first settlement at Meekatharra occurred in 1894 and in May 1896, after the prospectors Meehan, Porter and Soich discovered gold, miners moved to the new settlement from the other East Murchison fields.

* The Meekatharra field was short-lived. It was as a result of a second gold discovery in 1899 that the town survived and prospered.

* In 1902 the Western Australian Bank opened in a tin shed.

* The township was officially gazetted in 1903.

* In 1906 Alfred Wernam Canning developed a stock route, now known as the Canning Stock Route, from the East Kimberleys to the Murchison. The stock route, comprising 54 wells, was completed in 1908.

* In 1909 Bishop Riley consecrated St Oswald's Anglican Church - a building made out of corrugated iron.

* The railway arrived in Meekatharra in 1910. The town became the railhead at the end of the route. That year it carried the first shipment of wool out of the area.

* By the 1920s Meekatharra had become the de facto Labour Exchange for the district with employers coming for a hundred miles (160 km) to find labour to shear their sheep or work in their mines.

* In 1924 Charles Kingsford Smith established the Gascoyne Transport Company and delivered mail through the district.

* Between 1927-1931 a railway operated between Meekatharra and a manganese mining town called Horseshoe.

* During World War II the Americans built a huge 2,181 metre runway which is still used as an alternative when the runway in Perth is closed.

* When a solar-diesel power station was built near the town in 1982 it was the largest of its kind in the world. Meekatharra became the first town in Australia powered by solar energy

The local shire website - http://www.meekashire.wa.gov.au - has useful information about road conditions and weather. 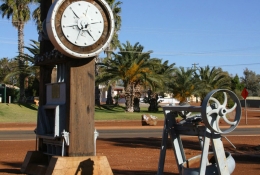 The historic stamper battery now in the main street. 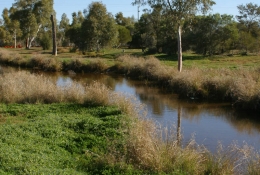 Meekatharra Creek runs through the town. 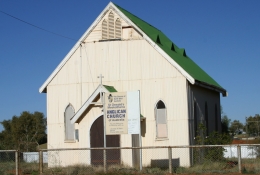 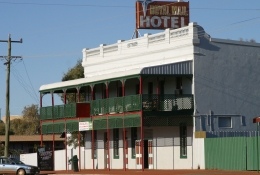 The Royal Mail Hotel in the town's main street. 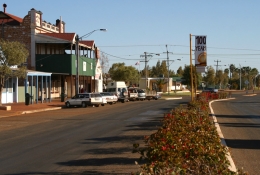 The main street in the late afternoon. 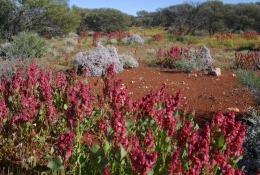 In spring the wildflower displays around the town are spectacular. 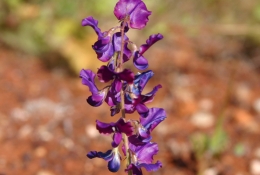 Individual blooms during spring are remarkable. 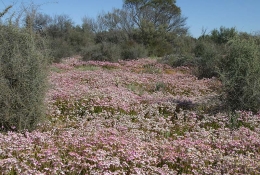 Flowers cover the ground between the low lying desert scrub 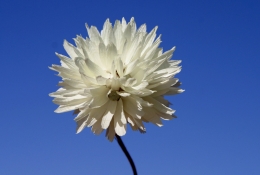 A Western Australian paper flower against a cloudless spring day. 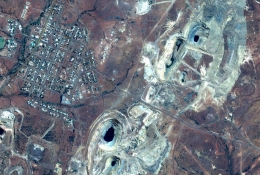 Google Map of Meekatharra and the huge mining operations and super pits to the east of the town.