Charming town at the western edge of the Dandenong Ranges

Monbulk is a unique town. It was created in 1893 as the Dandenong Forest Village Settlement, a government experiment which divided the land into 76 farms each of 10 acres and used the rich fertile soils to encourage the growth of orchards, fruit and vegetables. Within three years local businessmen had established the Monbulk Jam Factory which became hugely successful and a byword for quality Australian produce. Today the soils around the town focus on nursery production and floriculture. The town is the home of Garden Express, the largest online and mail order nursery in the country, and Tesselaar Flowers, the oldest flower wholesaler.

Monbulk is located 54 km east of Melbourne via the M3 and Belgrave.

Monbulk was originally known as Monbolok or Monbolac - a local Wurrundjeri Aboriginal word meaning "hiding place in the hill”. It is claimed that Mrs Aeneas Gunn, who wrote We of the Never Never about life in the Northern Territory, traced the name through a local Aborigine named John who was a member of the Terrick Terrick group.

Silvan Reservoir Park
The Silvan Reservoir Park is a recreation area in the foothills of the Dandenong Ranges. There are 20 ha of lawns and landscaped picnic areas which consist mainly of exotic vegetation (including cypress, spruce, liquidamber, poplar, and maples), surrounded by eucalypt forest. The European-style formal gardens, which were developed in the 1930s, feature azaleas and rhododendrons and have stone terraces and a vine-covered pergola. The Park has children's play facilities, barbecues (with free wood), some fine views and numerous walking tracks.
This site was chosen for a reservoir after a severe drought in 1914. Construction commenced in 1926 and the dam was officially opened in 1931. The dam wall is 644 metres long, 219 metres wide at its base and 43 metres high. It stores water for Melbourne and surrounding areas. The area is rich in native fauna and it is possible to see the short-beaked echidna, brush-tail and ring-tail possums, sugar gliders and the common wombat. Birdlife includes herons, spoonbills, ducks, rosellas, kookaburras, wedge-tailed eagles, thornbills, tree creepers, robins, owls and cockatoos.
To access the park follow the Monbulk Road north for about 8 km and turn left into Stoneyford Road at Silvan. On the road are two entrances which lead into Silvan Reservoir Park at the northern edge of Silvan Reservoir.

Butterfield Conservation Reserve
Located at 172 Emerald-Monbulk Road, the Butterfield Conservation Reserve is an area of protected native forest located adjacent Woori Yallock Creek. The main attraction in the Reserve is the 3 km loop Wildlife Reserve Walk which starts from Emerald-Monbulk Road. Other places of interest include the remnants of Bill Butterfield's cottage and a series of walking tracks which follow the original trails which were constructed in the 1850s for visitors from Melbourne. Near the entrance gate is the Emerald Diggings Picnic Ground, and an access point to the Dandenong Ranges Tourist Track. It is also possible to see the helmeted honeyeater and Leadbeater possum whilst walking in the reserve. Check out https://www.melbourneplaygrounds.com.au/butterfield-conservation-reserve-emerald#.XUjkni1L1Bw for more information.

Dandenong Ranges National Park
Dandenong Ranges National Park (3,540 ha) was declared in 1987 when the Ferntree Gully National Park, Sherbrooke Forest and Doongalla Estate were amalgamated. A decade later the Olinda State Forest, Mount Evelyn and Montrose Reserve were added. The park, which stretches from Kalorama in the north to Belgrave in the south is primarily a place for walking, sightseeing, picnicking, nature observation and car touring. More than 400 plant species have been recorded in the park, including the rare cinnamon wattle and smooth tea-tree, 130 bird species, 31 species of mammals (most are nocturnal), 21 reptile species and nine amphibians.

Each has its own attractions and they can best be explored by:

(a) check out https://parkweb.vic.gov.au/explore/parks/dandenong-ranges-national-park and downloading the specific Visitor Guides for each section.

The southern section of the National Park is known as Sherbrooke (over 800 ha) which extends from Selby in the south to Sherbrooke in the north and the Mt Dandenong Tourist Road in the north-west. This section of the Park is known for its impressive stands of mountain ash. Most grew after a severe fire in the 1920s. The largest flowering plant in the world, they can reach a height of 100 m and can live for 500 years. Sherbrooke forest is home to lyrebirds, ring-tailed and brush-tailed possums, blue-winged parrots and tree creepers which forage from the tree trunks.
There are a number of excellent Picnic Grounds

* Sherbrooke Picnic Ground is located, surrounded by bushland, near Sherbrooke Road and is the departure point for a number of bushwalks including a easy 2.4 km (one hour return) walk to Sherbourne Falls. There are a number of picnic tables. Check out https://parkweb.vic.gov.au/explore/parks/dandenong-ranges-national-park/accessibility/sherbrooke-sherbrooke-picnic-ground for more information.

* O'Donohue Picnic Ground has picnic tables, toilets and information boards. Walking tracks lead  through mountain ash forest and tree ferns to Sherbrooke Falls (2.4 km return) and the track from the O'Donohue Picnic Ground can be steep and is not suitable for people of limited mobility. There is a narrow staircase down to the Falls viewing platform. Check out https://parkweb.vic.gov.au/explore/parks/dandenong-ranges-national-park/things-to-do/odonohue-picnic-ground for more information.

* Grants Picnic Ground is located at 70 Monbulk Road, Kallista. There are three walking trails which depart from the Picnic Ground:

(a) Margaret Lester Forest Walk - a 300 metre, 30 minute loop through the forest. It is particularly suitable for disabled and the website (https://parkweb.vic.gov.au/explore/parks/dandenong-ranges-national-park/things-to-do/sherbrooke-grants-picnic-ground) has specific information for disabled visitors.

(b) Hardy Gully Nature Walk - a 700 metre, 45 minute loop through cool temperate rainforest with interpretative signs along the way.

(c) Eastern Sherbrooke Forest Walk - is a 7.1 km loop which is moderate to difficult and will take two hours. Most of the walk is through Mountain Ash and Messmate Stringybark forest and there are steep sections which can become slippery when wet.

Heidelberg School Artists Trail
Starting in Heidelberg and continuing into the Dandenong Ranges and to Yarra Glen, this route is designed to take visitors to the sites depicted in the paintings of those artists who were associated with the Heidelberg School (Arthur Streeton, Walter Withers, Louis Buvelot, Tom Roberts, Clara Southern, David Davies, Emanuel Phillips Fox, Charles Conder, Tudor St George Tucker, Eugene Von Guerard, May Vale and Jane Price).
At each such site there is a reproduction of the relevant painting which allows the visitor to see artist's interpretation of the landscape and to observe how the landscape has changed since the late 19th and early 20th centuries.
There is an explanatory sign at the Sylvan Reservoir:

* Prior to European settlement the area was home to the Woiwurrung Aboriginal people.

* The forests drew timbergetters in the early days of European settlement who supplied a growing market in Melbourne.

* Monbulk was one of three towns established by the government in the 1890s. It is the only one of the three to survive.

* In 1893 it was created as the Dandenong Forest Village Settlement. This comprises 76 farms each of 10 acres.

* In 1897 the famous Monbulk Jam Factory was established. That year saw the opening of the Monbulk Primary School and the establishment of a fruit grower's cooperative.

* By 1906 there were three churches in the village.

* In 1913 the Monbulk Primary School burnt down during a serious bushfire.

There is an official website. Check out https://visitdandenongranges.com.au/monbulk for further information. 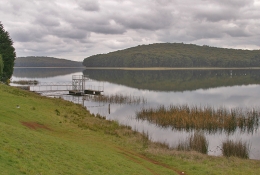 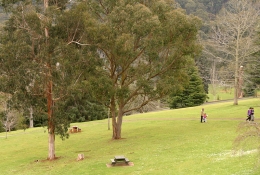 The parklands and gardens around the Silvan Reservoir 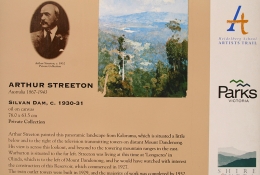