Wadderin Wildlife Sanctuary
Located 10 km north of Narembeen, via Wadderin, the Wadderin Wildlife Sanctuary is a 400 ha sanctuary for uncommon and near-extinct native animals. It is enclosed by 11 km fence and is home to such rarities as the Red-tailed Phascogale, Brush-tailed Bettong and Malleefowl. The fence protects them from feral animals and foxes. The sanctuary is run by a local community group. Tours are available within the fence to view the nocturnal animals.  Contact the Shire of Narembeen, tel: (08) 9064 7308. Outside the sanctuary fence is the Wadderin Wildlife Information Centre and a Walk Trail. There is a Mallee Fowl and a Woylie walk trail through Eucalypt woodlands and Mallee shrublands. Interpretative signs identify flowers, trees, birds and the native animals - it is rare to see them as they are mostly nocturnal. For more information check out https://www.narembeen.wa.gov.au/visit/what-to-do/things-to-see-and-do.aspx.

* Prior to the arrival of Europeans the area was occupied by the Nyoongar First Nation peoples.

There is a local website which has useful information about the town and district. Check out https://www.narembeen.wa.gov.au/visit/what-to-do/things-to-see-and-do.aspx. 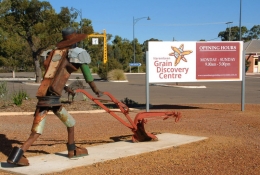 The farmer sculpture outside the Narembeen Grain Discovery Centre. 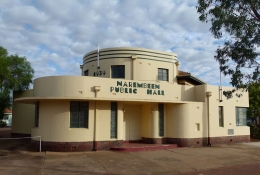 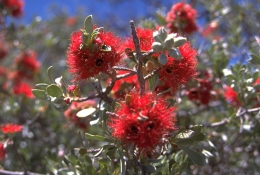 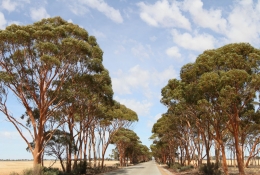