Quiet town on the western edge of the Blue Mountains.

Oberon, unlike all the other towns in the Blue Mountains (and it is at the western extreme of the region), is essentially agricultural and industrial. The area around the town is known for its prime lambs, beef cattle, vegetable production, tree nurseries, nut tree plantations, bulb farms and radiata pine plantations. It is particularly known for its timber mills and logging. It is known to be very cold in winter with harsh frosts and snow. It is also an ideal location for people wishing to explore some of the wonders of the Blue Mountains. Yerranderie ghost town, the Jenolan Caves and the sublime Kanangra Walls are all easily accessible.

Oberon is located 1113 m above sea-level, 46 km south-east of Bathurst and 178 km west of Sydney via the Great Western Highway, Jenolan Caves Road and Duckmaloi Road.

Originally Oberon was known by the unromantic name of Bullock Flats. In 1863, when it was officially proclaimed a village, a local woman suggested Oberon, the name of the King of the Fairies in Shakespeare's A Midsummer Night's Dream. In 1904 a nearby village was renamed Titania after the Queen of the Fairies.

Oberon's Heritage Buildings
There are three heritage buildings of interest in Oberon.

(1) St Barnabas Anglican Church (1869) which is located at 104 Oberon Street. It is a simple church but one of the oldest buildings in the town.

(2) The elegant Ramsgate (1906) is a two-storey Victorian residence, built by storekeeper Albert Fox who named it after his home town of Ramsgate in Kent. It features verandas on both floors, a rubble-stone and cast-iron fence and decorative effects in wood and cast-iron. Over the years it has been the home and surgery of Dr Lance Robey, a tea house and a guesthouse. It is now a private home.

(3) The Art Deco Malachi Gilmore Hall (1937) is named after the Irish immigrant who was the original European owner. It is a distinctive feature of Oberon's main street.

Museum
If you are interested in old farm machinery the Oberon and District Museum has over 150 examples spread around its one hectare site. If you want to inspect the museum's collection, which specialises in local history, it is only open by appointment, tel: (02) 6336 1016. The main building is located in the old railway station on Lowes Mount Road.

Lake Oberon
Lake Oberon lies at the south-eastern edge of the town and is formed by the Fish River Dam. It has plentiful supplies of brown and rainbow trout which can be fished all year round. There are picnic, barbecue and childrens' play facilities and an amphitheatre. On the foreshore is the Oberon Golf Club, noted for the presence of kangaroos on the fairways.

Town Common
The Town Common in Edith Road on the edge of town has is a band rotunda, a picnic area and a small lake. It is a perfect place for a picnic being quiet and particularly beautiful in autumn and spring. In autumn the Edith Road just beyond the Common has a spectacular stand of Lombardy poplars which turn a sublime yellow.

The Big Trout
Outside the Big Trout Motor Inn is the town's "Big Trout" which, sadly, is rarely listed in Australia's Big Things. It has recently been refurbished and repainted and is definitely worth inspecting if you are a lover of our national eccentric love of big things.

Truffle Hunting
This is a rare activity and it only occurs in June, July and August but if you have a weakness for Black Perigord truffles then heading off with the truffle dogs in search of the "black diamonds" is a lot of fun - and something very few other people get to do. Check out Lowes Mount Truffiere website - http://www.lowesmounttruffles.com.au/ or tel (02) 6336 3148.

Mayfield Gardens
Located 11 km north west of Oberon, Mayfield Gardens is a huge garden (38 acres) which, in theory, takes three hours to walk around. It includes a water garden, Chinese pagoda, sunken garden, croquet court and rose garden, amphitheatre, walled kitchen garden, orchard, maze, lawn parterre. The whole garden is open for two weeks, four times a year. The Water Garden and the associated areas, around 80 acres, are open to visitors all year. Check out http://www.mayfieldgarden.com.au/ for prices and details.

O'Connell
Located 25 km north-west of Oberon on the O'Connell Rd, this historic hamlet on the Fish River is classified by the National Trust. The settlement developed in the 1820s and the hotel, which still operates, dates from 1865. The Anglican Church is still in use. Swimming and trout-fishing are popular near the Fish River Bridge and there are a number of farmstay properties in the district including the Macquarie Homestead Farmstay which is on land gifted to William Lawson after his successful crossing of the Blue Mountains.

Tarana
Tarana  is located in a charming valley 25 km north of Oberon. The notable attractions around the town include the Evans Crown Nature Reserve which is 3km south east of the town. It has some bushwalking with impressive granite outcrops. Crown Rock, which is 1104 m above sea level, was an important initiation and corroboree site for the Wiradjuri people. From Crown Rock the explorer, George Evans, in 1813 first sighted the Bathurst Plains. On 1 December, 1813 he wrote in his diary: "My course is down to the Riverlett (Fish River); it appears to lead me north if west. On the north side of it at this place is a remarkable sugar loaf Hill having a stone peak of it, which I named after myself. I am more pleased with this country every day; it is a great extent of grazing land … and well watered by running streams in almost every valley." Today Evans Crown is popular with abseilers but permission must be gained from the National Parks and Wildlife Service and no new routes up the granite tor are to be developed. The walking track to the summit takes about half an hour. Check http://www.oberonaustralia.com.au/visitor-information/national-parks/evans-crown-tarana/ for more details.

Tarana Valley Tour
The Oberon Tarana Heritage Railway Inc has a self-guided tour of the railway from Oberon to Tarana and back (107 km) which can be downloaded. Check out http://othr.com.au/wp-content/uploads/2012/08/Tarana-Valley-Tour.pdf. The tour is ideal for railway enthusiasts and includes the Lithgow Zig Zag railway

Black Springs
Black Springs is a small village 23 km south-west of Oberon. It is notable for its historic stone Avoca Catholic Church and fossicking can be enjoyed at Sapphire Bend, off Riverview Forest Road  in Vulcan Forest, where sapphires, zircons and industrial diamonds can be found. For more information check out http://www.oberonaustralia.com.au/visitor-information/things-to-see-do/fossicking/. In Vulcan Forest it is possible to find exotic wood mushrooms between late January to May and there is trout fishing in the local streams.

Burraga
Burraga is 49 km south-west of Oberon via Abercrombie Road. It is a wool-growing and cattle area noted for its substantial pine plantations. Burraga started life as a mining town in the 1880s. It grew around the Lloyd Copper Mine which was one of the major copper producers in the country until it closed in the early 1900s. At one point the mine was so successful that the population reached 6000. Mine shafts, slag heaps and the largest chimney stack in the Southern Hemisphere are still in evidence on the outskirts of the town and mining memorabilia can be inspected at the Mill Museum in Rockley. The nearby reserve at Campbell's River, particularly Campbell's River Causeway, is a popular fossicking site for sapphires, zircon and gold.

Fossicking
There are a number of fossicking sites around Oberon for those who want to find sapphires, zircon, gold, smoky quartz and, very occasionally, diamonds. Check out the Oberon Visitor Information Centre where they can direct you to the best locations in the area and hire equipment. There is very detailed information, including instructions on how to fossick, at http://www.oberonaustralia.com.au/visitor-information/things-to-see-do/fossicking/

The National Park is ideal for bushwalking, fishing, cycling, photography, nature study and car touring. Check out http://www.nationalparks.nsw.gov.au/kanangra-boyd-national-park for comprehensive details as well as a good downloadable map.

Jenolan Caves
Jenolan Caves are only 29 km from Oberon on a good road which becomes steep as it descends into the caves valley. For all information about the caves check out the detailed Aussie Towns entry -https://www.aussietowns.com.au/town/jenolan-caves-nsw

Yerranderie
It is not easy getting to Yerranderie but the trip is worth the effort. 50 km from Oberon you turn east on a dirt road (an old stock route) marked 'Mt Werong' and 'Jerrong' and for the next 90 minutes travel 62 km through virgin bush on a pot-holed and winding road which crosses five creeks (in good weather the road is open to all traffic but in the wet it is strictly for 4WD vehicles) before dropping down into the beautifully located village.

Yerranderie is located on the edge of an extinct volcano. In 1871 a part Aborigine Werriberri (known as Billy Russell) found galena - from which silver and lead can be extracted - three kilometres from the town site. The price of silver was such that serious mining did not start until the late 1890s. From 1899 to 1914 the town prospered. A road from Camden was constructed and mining machinery, much of which now lies rusting in the bush, was brought in by wagons.

In its heyday between 1900 and 1914, Yerranderie was a thriving mining town with over 2,000 residents and services including a school, three churches, two butchers, one hotel, a police station and Court House and a silent movie theatre. At the top of the hill was the small 'Government Town'  (where one of the churches, the court house and the school still stand) and below it was the more populous 'Private Town' which has been carefully and tastefully restored. The Post Office has been converted to bunk style accommodation, S.C.Meldrum's tailor's shop is now a gift store and the bank is a museum.

* For tens of thousands of year prior to European settlement the Oberon area was inhabited by the Wiradjuri Aboriginal people.

* The first gold discovered in Australia occurred along the Fish River near Tarana in 1823. Not surprisingly settlement between Oberon and Taralga began in the 1820s. The land, because of the richness of the soil and the reliability of rainfall, was used for pasturage during drought.

* In 1839 Charles Whalan received the first permanent land grant in the area. Over the next decade numbers of immigrants from Northern Ireland settled in the district.

* Oberon was officially proclaimed a village in 1863 on the site which had previously been known as Bullock Flats.

* In 1923 the Oberon-Tarana railway was opened. It continued to operate until 1979. It was around this time that the growing of peas became important and radiata pine were planted resulting in the town's important timber industry. After World War II hardwoods also became important and in 1959 a pineboard factory was established.

* Today the town's economy is driven by the surrounding agriculture.

The town has an excellent and comprehensive website. Check out https://www.visitoberon.com. 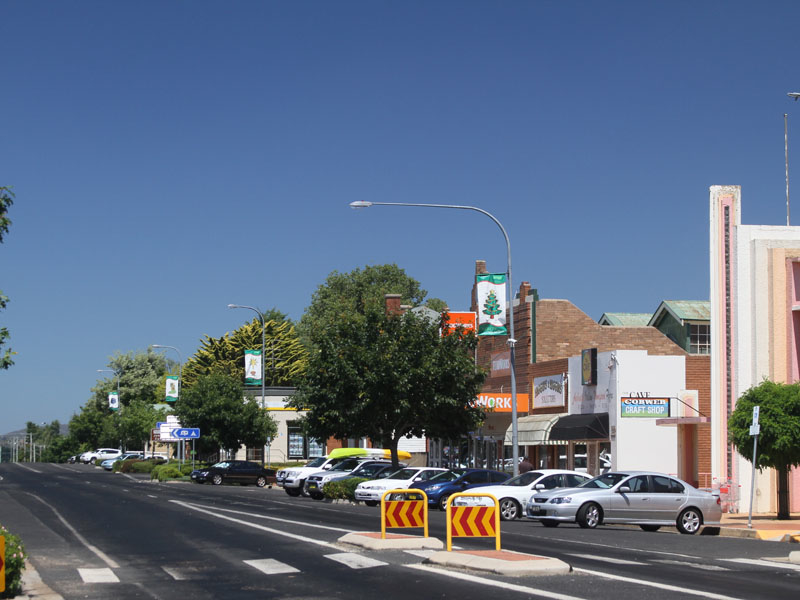 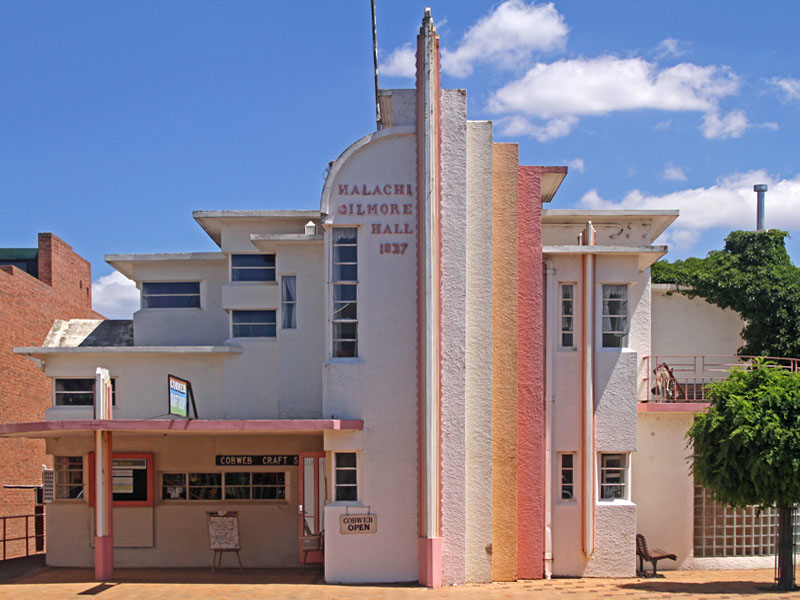 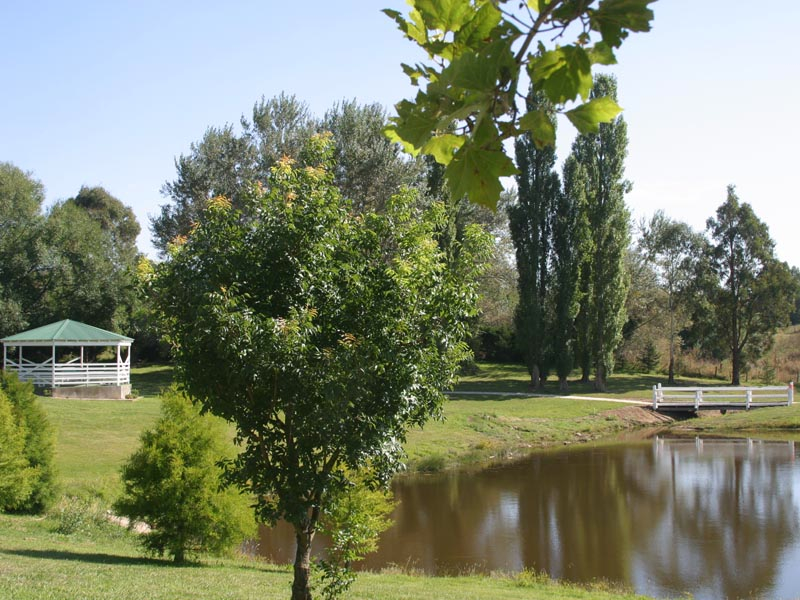 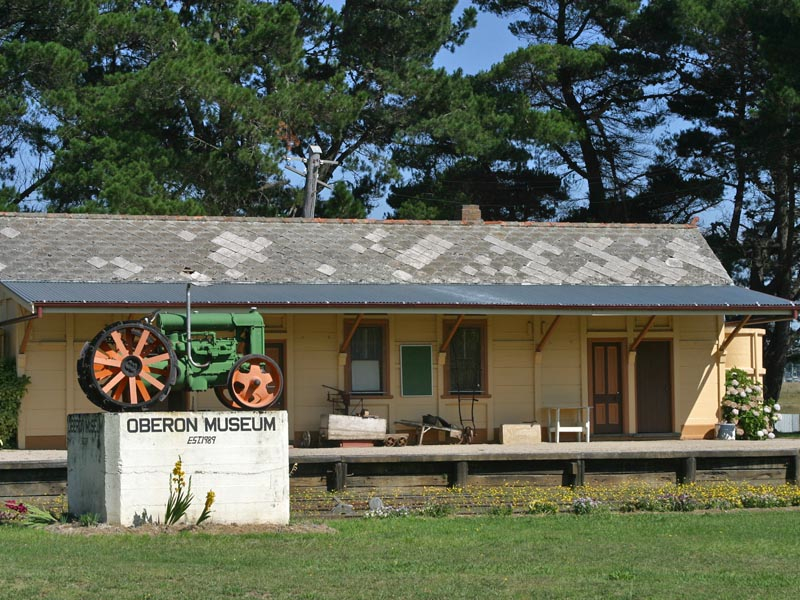