Quiet town located on the road between Goulburn and Bathurst.

The key to understanding Taralga lies in its annual Australia Day Weekend rodeo and its huge, modern Catholic Church. This is rural Australia where a large number of Irish Catholics settled, farmed the land, and are proud of their rural skills and heritage. It can be perishingly cold in winter with icy winds off the Southern Alps whipping through the town, the smoky signs of log fires rising from chimneys, and the pubs welcoming with large open hearths and friendly faces. The town used to welcome the visitor with a sign which read: 'Taralga - Smile you are in a Happy Town'. It has remained largely unchanged because the road through the town is only travelled by local people and drivers wanting to go on a back road from Goulburn and Bathurst. It has an interesting collection of heritage buildings mostly dating from the latter half of the nineteenth century , a couple of historic pubs and one of the largest Roman Catholic churches of any small town in Australia.

Taralga is located 238 km south-west of Sydney, 45 km north of Goulburn and 882 metres above sea level.

No one is sure where the town got its name. One theory is that it is a contraction of "trial gang" as it was a place where convicts were tried for their crimes. Another claims that "taralga" means "native companion" (a name for the bird we now know as the brolga) in the language of the local Aborigines.

There is a self-guided tour brochure, Taralga: A Heritage in Stone, which lists 41 places of interest in the town, 23 of which are on four blocks along Orchard Street. Like most historic towns the best way to explore the town is to get a copy of the brochure and go for a mooch down the main street.

The logical starting place is at the northern end (the Wombeyan Caves end) of Orchard Street and some of the highlights include:

(No. 1) Royal Hotel - the Royal Hotel was built in the 1870s. It was for many years the surgery of local doctor, Ettie Lyons. Lyons was one of the first female doctors in New South Wales. She began practising in Taralga in 1917 and continued as the town's doctor for the next 37 years. According to local rumour she was severe and forthright ensuring that patients heeded her advice.

(No. 3) Wesleyan Church - the Wesleyan (Methodist) Church was built in 1868 on land donated by James Macarthur's sheep overseer, Thomas Denning. Today the Taralga Historical Society uses the building and the surrounding grounds for "heritage displays". The sign out the front states it is "Open most Sunday's (sic) from 1pm or by appointment". In the grounds is  'Cordingley Cottage', a slab hut which has been reconstructed and furnished with period furnishings.

(No. 10) Goodhew Park - is in the centre of town and has swings, toilets and picnic facilities. In the park is a huge block of Wombeyan marble with a brass plaque recording the town's history.

(No. 23) Taralga Hotel - the Taralga Hotel was built for Martin Tynan in 1876. He called it the Richlands Hotel. Tynan's former residence (No.22) is just down the hill from the hotel. The residence later became the town's Post & Telegraph Office and is now a private home.

Wombeyan Caves
Although it is the longest route, particularly from Sydney, and the caves are still 32 km north-east of the town, the route through Goulburn and Taralga to the Wombeyan Caves is easier and safer than the 66 km of winding, often poorly maintained, road to the caves from Mittagong and the Hume Motorway. Check out https://www.aussietowns.com.au/town/wombeyan-caves-nsw  for more information.

* Prior to European settlement the area was inhabited by the Gundungurra Aborigines.

* The first European to pass through the Taralga district was the explorer Charles Throsby who, in 1819, travelled from Cowpastures (now Camden) to Bathurst via Burra Burra Lake in search of new grazing lands.

* In 1820 the explorer John Oxley passed through the district travelling from Bathurst to Lake Bathurst.

* In 1824 John Macarthur's son James and his nephew Hannibal, with Lachlan McAlister and John Hillas, became the first landholders in the Taralga district.

* A private village was established by 1843 on land owned by James Macarthur and cleared by convicts. The town's main street, Orchard Street, was named because it was located where the Macarthur family's orchard was originally planted.

* The 1860s was a decade of churches. The town's first church, the Presbyterian Church, was consecrated in 1861. St Ignatius Catholic Church was built in 1864; the foundation stone for St Luke's Anglican Church was laid in 1866; and the Wesley Church was opened in 1868.

* By 1891 the population had reached 723 and Macarthur's estate was subdivided for closer settlement in 1910.

* The railway arrived in the 1920s but the weekly rail service, which was primarily for moving produce, was closed in 1954.

* Today Taralga is a service town in an area known for its fine wool, beef cattle, fat lambs, potatoes, dairying, berries and vineyards.

Visitor Information can be obtained from the Taralga Historical Society, 83 Orchard Street, Taralga but it is only open from 1.00 pm - 4.00 pm most Sundays. A comprehensive amount of information is offered at the Crookwell Visitor Information Centre, 106 Goulburn Street, Crookwell, tel: (02) 4832 1988.

There is a good, detailed history of the town at https://www.upperlachlan.nsw.gov.au/snapshot-taralgas-history. 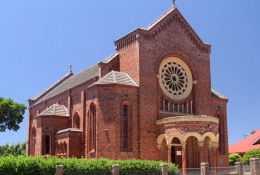 Church of Christ the King (1934) is part of the town's Catholic complex including a school and the presbytery. 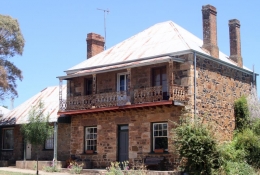 One of the many handsome stone houses in Orchard Street. 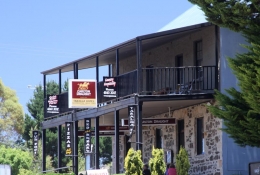 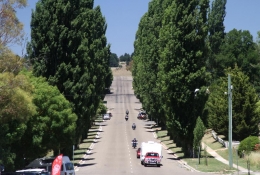 Looking down Orchard Street with the impressive row of poplars 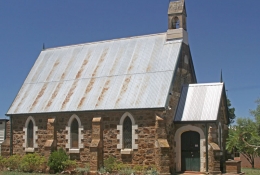 The Taralga Methodist Church (1868) now used as the town's museum. 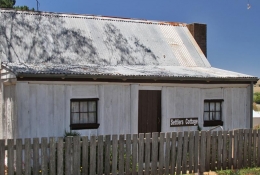 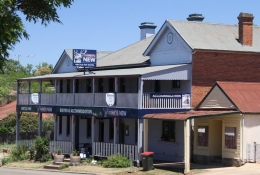