Tunbridge was an important staging post on the road from Hobart to Launceston. Today, because it was bypassed in the 1960s, it is a tiny, sleepy little village with a number of interesting historic buildings. Most notable is the town's convict-era bridge which, built in 1848, is one of the oldest single span bridges in the country.

Tunbridge is located just off the Midland Highway 95 km south of Launceston and 106 km north from Hobart.

Historic Buildings
The appeal of Tunbridge lies in the number of historic buildings. All the visitor needs to do is walk around town and admire the buildings. For example, the small cottage next to Bowerman's General Store (see photograph) was built in the early 1850s and has been beautifully maintained with a simple, but beautifully maintained, garden.

Tunbridge Manor which dominates the centre of town has been well preserved. It was built as the Victoria Inn around 1851. It became an important staging post offering stables for the horses as well as accommodation, meals and drinks for the weary travellers. Today the building is privately owned but has up to eight bedrooms and the outbuildings include stables and sheds. Bowerman's General Store is in the process of major restoration. It is an impressive two storey Georgian building with a five window facade. Other buildings of importance are the Tunbridge Wells Inn (which was originally a farmhouse and was licensed as an inn in 1834 - it is a single storey Georgian Inn); The Victoria Inn (outside is a sandstone roller used to roll the roads by the convicts); the Coaching Stables (1843) and The Blind Chapel - now the Masonic Hall and reputedly 'blind' - no windows - on one side so the Wesleyan Church parishioners didn't have to look at the local pub.

Tunbridge Convict Bridge
Tunbridge Convict Bridge is the town's most important structure. Built in 1848 it is one of the oldest single span bridges in Australia. It spans the Blackman River at the northern end of the town. A simple structure it is important as a rare example of a convict-era sandstone bridge with timber decking. The bridge achieved notoriety as it was a place where Thomas Meagher, a "Young Ireland" rebel, held secret meetings with his co-conspirators.

Ross
Only 15 km north of Tunbridge is the town of Ross (see https://www.aussietowns.com.au/town/ross-tas) which is famed for its outstanding convict-era bridge which dates from 1836 and is considered one of the finest examples of convict stonemasonry in the country. The town also has a fascinating Female Convict Factory (ruins) and a large number of significant Georgian buildings.

* Prior to European settlement the district was occupied by Lairmairrener First Nation people.

* In 1807 the surveyor Charles Grimes travelled through the area on his journey from the north to the south of the island.

* The town came into existence in 1809 and developed into an important coaching stop between Hobart and Launceston. A number of inns, with stables for the coach horses, were built in the town.

* The area developed in the 1810s as convicts worked on the main road from the north to the south of the island.

* In 1816 the first Hobart to Launceston mail service passed through the town.

* In 1848 convicts built the historic single span bridge across the Blackman River.

* In 1851 Tunbridge Manor, now the most impressive building in town, was built as an inn and staging post for the coaches which passed through the town.

* By the 1960s the Midland Highway had bypassed the town. As a result the town has been able to maintain much of its historic charm.

No Accommodation or Eating facilities are available.

There is a detailed website - http://ontheconvicttrail.blogspot.com.au/2013/02/tunbridge.html - created by combining information from other sources and a number of excellent photographs. It is worth checking out. 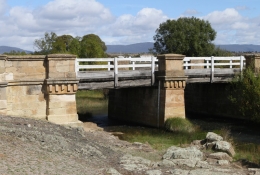 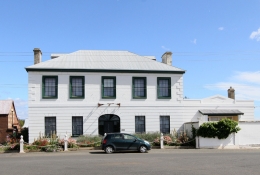 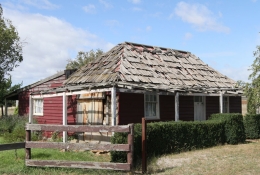 Historic cottage in the main street now being slowily restored by its Hobart-based owner. 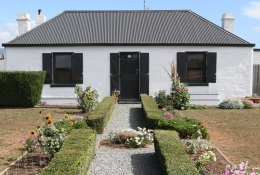 A beautifully preserved Georgian cottage dating from the 1850s.