Wheatbelt town known as the Cradle of Bulk Handling

Wyalkatchem is a typical Western Australian wheatbelt town. Known affectionately to the locals as ‘Wylie’ it is a small centre which relies for its economic survival on sheep and wheat. Its one claim to fame, indicated at the entrance to the town, is that it was the first Western Australian wheatbelt town to change from loading wheat in bags (a slow and backbreaking process) to bulk loading with grain elevators.

Wyalkatchem is located 206 km north-east of Perth via Mundaring and Cunderdin.

There are two explanations for the name. One is local folklore; the other is an attempt to understand the evolving meaning of a local Aboriginal word. The first argues that an Aboriginal trooper named ‘Wylie’, because he was wily and used to catch criminals, lent his name to the town which was called ‘Wylie catch'em’. Implausible, but funny. The other explains that Wyalkatchem is an Aboriginal name first recorded for a waterhole spelt Walkatching in the 1870's. The spelling Walcatching was used in 1881 when the Toodyay Road Board referred to a tank to be built there, and when the road from Northam to the Yilgarn Goldfield was surveyed in 1892 the spelling Wyalcatchem was used for the tank. The spelling was changed from Wyalcatchem to Wyalkatchem in 1911 by the WA Department of Lands & Surveys.

The Grain Elevators at the Town Entrance
Wyalkatchem is known as "The Cradle of Bulk Handling". To most outsiders this might seem like a strange claim but to those who had to lift bags of wheat, at one time they weighed 180 lbs (80 kg) - see https://www.aussietowns.com.au/town/port-victoria-sa - must have been overwhelmed with gratitude when, in 1931, the first trainload of bulk wheat departed from Wyalkatchem. The original grain elevators, like two huge monsters, loom over the entrance to the town. They are symbols of a town which became known as the cradle of bulk loading in the Western Australian wheatbelt. There is an excellent, detailed history at http://inherit.stateheritage.wa.gov.au/Admin/api/file/9a791817-b6fb-5780-fca0-1cb0ee717157.

Wyalkatchem Rare Flora Garden
The sign explains: "This garden is a collaborative project between the Shire of Wyalkatchem, Department of Environment and Conservation, the Wheatbelt Natural Resource Management and the Wyalkatchem community. Plants in this garden represent threatened and poorly known flora species that are considered to be facing a risk of extinction in the wild. This garden provides the unique opportunity to learn more about the local threatened and poorly known species that are rare in the wild.

Wyalkatchem CBH Agricultural Museum
Located on Railway Terrace and open from 9.00 am - 4.30 pm Monday to Friday and 10.00 am - 4.00 pm on weekends, the Wyalkatchem CBH Agricultural museum contains (both inside the building and in the surrounding yard) "a collection of agricultural, transport, railway and general equipment" including some rare tractors which have been carefully restored. The museum was established in 1981 tel: (08) 9681 1500 or (08) 9681 1027. Check out https://www.australiasgoldenoutback.com/business/attractions/wyalkatchem-cbh-agricultural-museum for more information.

Old School House Museum
Located at the corner of Gamble and Flint Streets, the Old School House Museum is a typical small town museum full of interesting memorabilia. One of its wonderfully idiosyncratic possessions is a set of false teeth with gold fillings. It also has old printing machines and the town's old telephone exchange. Check out https://www.wyalkatchem.wa.gov.au/visitor/attractions for opening times and contact numbers.

Pioneers Pathway
The Pioneers Pathway is a journey through the Western Australian wheatbelt which starts in Perth and continues to Merredin through Toodyay, Goomalling, Dowerin, Wyalkatchem, Trayning and Nungarin. There is a detailed brochure which can be downloaded from the website - http://pioneerspathway.com.au. The section (Day 2) which passes through Wyalkatchem suggests that "The drive from Dowerin winds through farmland, bush reserves and springtime wildflowers.Visit the Wyalkatchem CBH Museum to learn about John Lyndsey and how Australia’s largest grain export company started right here. Enjoy a pub lunch at either Wyalkatchem or Trayning, and then stretch your legs on a delightful historical walk trail around the Trayning townsite to admire its significant pioneer buildings. When arriving in Nungarin head out to Mangowine Homestead and discover the stories and buildings lived in by Jane Adams, a pioneering farmer’s wife and mother as well as Inn Keeper along the Yarragin Road to the Goldfields. End the day in Merredin."

Wheatbelt Way Drive
This is a very comprehensive look at the Western Australian wheatbelt starting in Dowerin and ending in Westonia. It passes through Wyalkatchem, Trayning, Koorda, Bencubbin, Mukinbudin, Nungarin and Beacon. For a detailed map and information about all the towns and attractions along the way, check out https://www.wheatbeltway.com.au/wp-content/uploads/Wheatbelt-Way-Trail-Map-2016.pdf.

* Prior to the arrival of Europeans the area was home to the Ballardong Nyoongar Aboriginal people.

* The first European in the area was the explorer A.C. Gregory in 1846.

* The district was settled by pastoralists in the 1860s.

* A water supply, the Wyalkatchem Tank, was built by sandalwood cutters in 1881.

* Wheat production in the district started around 1906.

* The railway reached nearby Korrelocking in 1910. At this time Korrelocking had a railway station, bar, barracks and boarding houses. Wyalkatchem was nothing more than a few camps and a blacksmith’s shop.

* The town was gazetted in 1911. The railway from Dowerin reached the town that year.

* On 9 November 1931 Korrelocking became the first place on the wheatbelt to convert from bagged wheat to bulk loading facilities.

* In 2011 Wyalkatchem Airport was upgraded when the main runway was extended and a new terminal building was opened.

There is a useful local website with information about accommodation. Check out https://www.wheatbelttourism.com/where-to-stay/wyalkatchem. 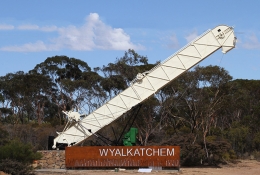 The grain elevator at the entrance to the town 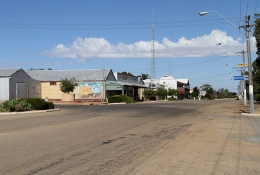 The main street of Wyalkatchem 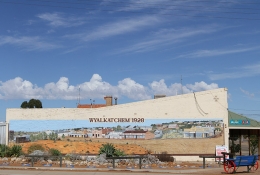 A mural depicting the town in 1928 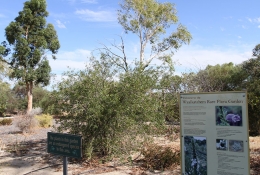 Wyalkatchem CBH Agricultural museum is housed in a 1936 wheatbin 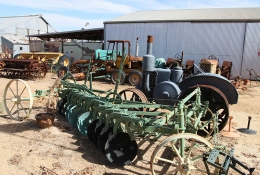 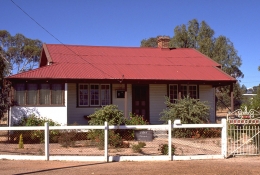