Historic ghost town which describes itself as 'The nearest wilderness to Sydney'.

Yerranderie is a ghost town that once prospered as a silver and lead mining operation. In the years immediately prior to World War I it had a population of over 2,000 and between 1900 and 1912 the mines in the area yielded 5,381,000 ounces of silver, 9,951 ounces of gold and over 12,000 tons of lead. The war saw miners leave the area and it never really recovered. The town was effectively killed when, in the 1950s, the Sydney Water Board built the Warragamba Dam and cut access from Camden and The Oaks. The dam reduced access to a difficult drive on unsealed roads from either Goulburn or Oberon. Then in 1947 the entire town was sold to Aubin Rene Lhuede and for decades it was owned and run by his daughter, the remarkable Valerie Lheude, who, in 2011 at the age of 89, handed it over to the NSW Minister for the Environment. It is now managed by the National Parks and Wildlife Service in Oberon.

Yerranderie is located 279 km from Sydney via Oberon and 359 km via the Hume Motorway and Goulburn. Visiting Yerranderie involves commitment and, preferably, a 4WD. It is either 101 km from Goulburn or 50 km from Oberon then turn north on a dirt road (an old stock route) marked 'Mt Werong' and 'Jerrong' and for the next 90 minutes travel 62 km crossing five creeks (in good weather the road is open to all traffic but in the wet it is strictly for 4WD vehicles) on a winding and difficult road before reaching the township. Ironically Yerranderie is only about 100 km from the Sydney CBD "as the crow flies".

It is a rarity for no one to know what an Aboriginal town name means but Valerie Lheude, who knows more about Yerranderie than anyone else, says she never discovered what the word meant. She thinks it might be the name of the group of Aborigines who lived in the area ... but she is not sure.

Historic Exploration of the Village and the Mine Sites
There is a good map of the town which provides details of walking tracks (many are steep climbs) in the area to the Burragorang Mine site, the Lance Shaft, the Bartlett No. 6 Shaft, the Colon Peak Mine, the Piece of Pork Mine, the Wonga Mine, the Silver Peak Mine and the location of the town's most significant buildings - the Court House, the Police Station, the Post Office, St Senan's Catholic Church and Krubi Cottage.

There is a sense of friendliness that pervades the experience of staying at Yerranderie and the caretakers provide details about the historic remnants of the town as well as providing a handout for the Mine Walks and a Self-Guided Town Tour. The website also provides very comprehensive information about the mines and shafts. A typical entry is that of the Wonga Mine: "Main shaft 850 ft long, slope 18 degrees. Opened in 1911 it had its own winding gear, boiler and air compressor and was worked together with the Burragorang Mine.  The lode on Wonga was unpromising, although some ore assayed as highly as 1.5 ozs of silver per ton and 60% lead. Quartz containing iron pyrites (fool’s gold), silver and lead can still be found around the entrance to the mineshaft."

The Bushwalks
The area is noted for its long distance walks with keen bushwalkers trekking overland from the Blue Mountains to the Southern Highlands along tracks and stock routes which are old and very scenic. There are two modest walks which start from the Post Office in the village.

(a) Yerranderie Peak Walk - 3 km return. It is easy if you are reasonably fit and takes around 2-3 hours. The walk offers fine panoramic views of Warragamba Dam. It also allows the walker to see the damage done to the area by the mines with the scars of both Silver Peak and Colon Peak being still visible and mullock heaps being an eyesore on the pristine bush landscape.

(b) Zuchetti Flat Walk - 4 km return. This is a walk of moderate difficulty which usually takes around three hours and is ideal for walkers hoping to see local wildlife.

The Fauna
The area is alive with wildlife. The visitor can expect to see kangaroos and wallabies particularly Eastern Grey and Grey Forrester Kangaroos  and Red-Necked Wallabies. If you are lucky it is also possible to see dingoes, wombats, wallaroos and emus. And the whole area has a rich variety of birds including the kookaburra, lyrebird, wattlebird, pardalote, wren, honeyeater, treecreeper, wattle bird, whipbird, noisy friar, Wonga pigeon, currawong,  chough, bowerbird, raven, King parrot and crimson rosella.

The Flora
Not surprisingly the mines damaged the landscape but much of it has been reforested with wattles and mixed eucalypts. The area also has fine stands of ironbark and banksia and in springtime the displays of wildflowers are impressive.

Wombeyan Caves
From Yerranderie there is picturesque fire trail (only accessible by 4WD vehicles) that runs for 35 km to Wombeyan Caves which have an excellent picnic ground which is alive with mobs of kangaroos. Be prepared to climb and clamber when you explore the caves: the Wollondilly Cave, regarded as the highlight of Wombeyan, has some 539 steps. Check out https://www.aussietowns.com.au/town/wombeyan-caves-nsw.

Kanangra Walls
To the north-west are the Kanangra Walls (which is only about 25 km across the valley but some 162 km via Oberon by road) which offer the most spectacular views in the whole Blue Mountains. The views from Kanangra Walls across Kanangra Deep to mountains romantically named Stormbreaker, Cloudmaker, High and Mighty is unforgettable.

* Prior to the arrival of Europeans the area around Yerranderie had been occupied by members of the Dharug, Dharawal and Gundangarra Aboriginal language groups for over 20,000 years.

* The first European into the area was the French explorer Francis Luis Barrallier who, in 1802, walked from Nattai to Yerranderie. He recalled the exploration in his book Expedition into the Interior of New South Wales.

* In 1871 a part-Aborigine named Werriberri (known as Billy Russell) found galena - from which silver and lead can be extracted - three kilometres from the town site.

* The price of silver was so low at the time that serious mining did not start in the area until 1898 when John Vigar Bartless produced payable ore.

* By 1899 a road had been built from Camden across the Burragorang Valley. It allowed mining machinery to be brought to Yerranderie and the extracted minerals to be taken out.

* By 1914 the town had over 2,000 residents and services including a school, three churches, two butchers, one hotel, a police station, Court House and a silent movie theatre. At the top of the hill was the small 'Government Town' (where one of the churches, the court house and the school still stand) and below it was the more populous 'Private Town'.

* Between the end of the World War I (1918) and the outbreak of World War II (1939) the town experienced long periods of industrial unrest and many of the miners did not return.

* In 1928 the miners were locked out of the mines due to an industrial dispute.

* In the 1950s the Burragorang Valley was flooded by the Sydney Water Board after the building of Warragamba Dam. This cut off the main accessible road to the town. The only access was from Oberon via the Colong-Oberon stock route.

* In 1947 Aubin Rene Lhuede (his father had emigrated from Brittany in 1871) purchased the entire town. He sold the hotel license to Les Hooker, the principal in the real estate and development company, L.J. Hooker. Hooker transferred the license to a hotel in St Marys in Sydney's west.

* In 1956 Val Lhuede purchased shares in her father's company.

* Val Lhuede took the Sydney Water Board to court and in 1959 she was compensated £3,000 for the lack of access to the town.

* In 1965 the price of silver rose and a Canadian company started mining in the area but the mine was not economically viable. By the late 1960s it had closed down.

* From 1947-2011 'Private Town' was owned by the conservationist and architect Valerie Lhuede who started restoring the old buildings and converting them to accommodation.

* In 2011, at the age of 89, Valerie Lheude AM, B.Arch (Restorer) gave the village to the New South Wales Minister for the Environment. It is now administered by the National Parks and Wildlife service.

* Today Yerranderie Regional Park, which was created in 2012, covers 470 ha which combines the remnants of the town with old mining sites and bushwalks. 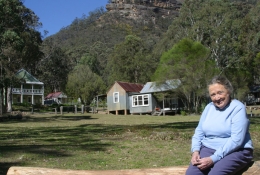 Valerie Lheude at Yerranderie in 2007. 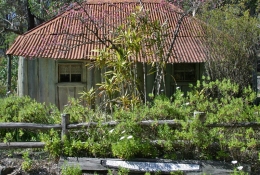 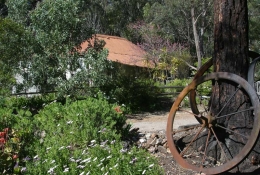 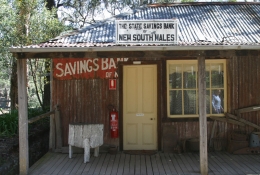 The old State Savings Bank of New South Wales on the main street. 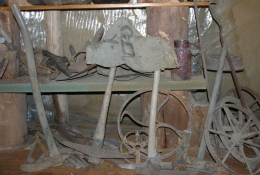 Remnants of the town's mining days are collected in the village museum. 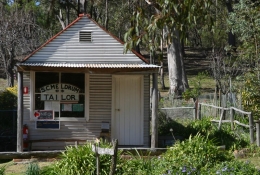 The shopfront of S.C. Meldrum, Tailor. 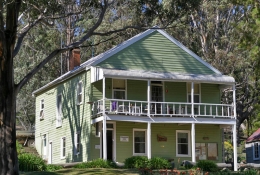 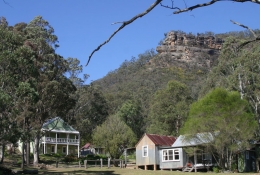 Yerranderie Peak towers over the village.