"Canberra by the Sea" is how many people see Batemans Bay. Certainly it is the closest seaside town to the national capital and certainly it is popular both as a holiday destination and place of retirement for those who spend their lives in the chillier climate of Canberra. Located at the mouth of the Clyde River, Batemans Bay is now a very extended suburban sprawl which stretches south from the river mouth. It is hard to tell when the town - now the largest coastal community between Wollongong and Melbourne - finishes and some of its satellite communities begin. It has been described as an important service centre for a commercial and agricultural region specialising in sawmilling, dairying, cattle, fishing and oyster-farming but primarily it is an economy driven by tourism. But, with a certain sense of schizophrenia, it is both a retirement destination and an activity based community with bushwalking, fishing, sailing, kayaking, scuba diving, surfing, cycling, boating on the river and visiting the zoos and lookouts involving most visitors.

Batemans Bay, the largest coastal community between Wollongong and the Victorian border, is located 278 km south of Sydney on the Princes Highway.

The bay was sighted by Captain James Cook on April 22, 1770. He named it after Nathaniel Bateman whom Cook had sailed with on the HMS Northumberland.

The Old Courthouse Museum
Managed and operated by volunteers from the Clyde River and Batemans Bay Historical Society this museum has information on local history as well as an interesting collection of artefacts and photographs. It is open Tuesdays and Thursdays  from 12.00 pm - 3.00 pm and Sundays 9.00 am - 12.00 pm (02 4472 8993). It is located at 1 Museum Place.

Birdland Animal Park
Located at 55 Beach Road (on the way to Batehaven) the Birdland Animal Park is an ideal place for a family day out. It has over 100 species of native birds on 3.2 ha of waterfront land. As well there are wombats, friendly snakes, deer, kangaroos, and plenty of shelters for picnics and a large children's play area. Check http://www.birdlandanimalpark.com.au for entrance prices and opening times or tel: (02) 4472 5364.

Each walk is described in detail with information about length, grade, time and access. A typical entry is the easiest walk - Banksia Walk, Burrewarra Point

"Burrewarra Point has a charming walk through mature Banksia forest with views up and down the coast and west to the hinterland. It is a fine vantage point to spot whales during their southerly migration from early September to late November. In autumn, the large grey-green flower spikes of the banksias open, attracting a variety of nectar eating birds. Please note the cliff edges are not fenced making the walk unsuitable for toddlers.

At the other end of the spectrum there are walks "moderate to hard" such as the Corn Trail a 12.5 km trail in Buckenbowra State Forset which starts at Clyde Mountain about 40 km from Batemans Bay - turn left into River Forest Road. The Corn Trail passes across high mountain ridges, through eucalypt forest and into deep rainforest gullies. The top of Clyde Mountain is often covered in mist.

The trail was created in the 1830s by the settlers from the Clyde valley who transported their produce on packhorses, mostly corn, to the Southern Tablelands. Farmers in the tablelands used it to move cattle to the coast for agistment.  During the goldrush era the trail was used by gold prospectors heading for Araluen. When the Clyde Mountain Road from Nelligen to Braidwood was opened the track was abandoned. It fell into disrepair and was completely overgrown by the 1920s. In 1987 the Bicentennial Authority funded local historians to reconstruct the trail. The route is marked out by stone along the edges and cairns ensure that walkers are on right path. It takes about four to seven hours which means walkers must take food and water, something warm and waterproof and a good map. There is a downloadable brochure. http://www.eurobodalla.com.au/docs/long-walks-Oct-2010.pdf
All the walks are described in detail at http://www.eurobodalla.com.au/walks.

Botanic Gardens and Reserves
Eurobodalla Native Botanic Gardens is located just off the Princes Highway to the south of the town. It features plants which are native to the Eurobodalla region. The Tollgate Islands off the coast are a nature reserve. Both are a breeding ground for wedge-tailed shearwaters, little penguins and white-faced storm petrels.

Cruises on the Clyde River
Merinda Clyde River Cruises (02 4472 4052) offer a three hour cruise (11.30 am - 2.30 pm with lunch included) on the Clyde River. It is an interesting way to see the town and its environs. The mouth of the river is extensive and the river is navigable for 35 km from Shallow Crossing to Tollgate Islands. The Merinda Cruise goes up the river to Nelligen. For bookings check out http://www.eurobodalla.com.au or tel: (02) 4472 4052.

Driving around Batemans Bay
Perhaps the best drive in the area is the one along the coast from Batemans Bay to Broulee and then back along the highway via Mogo. The daisychain of beaches to the south of the town include Batehaven, Sunshine Bay, Denhams Beach, Surf Beach, Lilli Pilli, the glorious Malua Beach where the local surf lifesaving club is located, North and South Rosedale, Guerilla Bay with its layers of chert and slate and Tomago.

A Rich Indigenous Heritage
One of the genuinely magical experiences (and it is hard work) is to bushwalk to the top of Gulaga (Mount Dromedary) where there are a number of impressive sacred sites where the local Yuin people have found in the remarkable granite tors great spiritual significance. Gulaga is an ancient forested volcano. There are also shell middens at Murramarang National Park. For more details check out http://www.eurobodalla.com.au/indigenous

Fishing in the River and the Ocean
The area around Batemans Bay has always been special for fishermen. Because it lies at a point where a major South Coast river reaches the sea it is popular with those who like to fish from a boat, off the rocks, on the beach or at the sandbanks on on the jetties. There are literally dozens of operators offering both boat hire and conducted fishing charters. The fish on offer include bream, leatherjacket, garfish, tailor, salmon, flathead, jewfish, drummer, blackfish and snapper from the jetties and the beaches and marlin, tuna and shark for the charter boat anglers.

Runnymede House
Although it is now a private home and not open to public inspection, Runnymede House is the most historically significant building in the district. It was built by Henry Burnell in 1837-38. He employed convict labour and servants he had brought from England. It can be viewed from the bridge at Runnyford. Access to Runnyford involves heading from Batemans Bay on the Princes Highway and turning right into Runnyford Road. There is a detailed history of the house at http://nelligennews.blogspot.com.au/2013/11/the-history-of-runnymede.html

Mogo
To the south of Batemans Bay lies the tiny town of Mogo which, in recent times, has become something of a tourist magnet. It has a particularly impressive private zoo. It has good cafes and is a very pleasant way to spend a day out from Batemans Bay. For more details check out https://www.aussietowns.com.au/town/mogo-nsw.

Murramurang National Park and Durras
The one place in the whole area where you are guaranteed to see kangaroos on the beaches is Murramurang National Park where in the early morning and late evening the animals come down to graze on the grasses at the beach edge. It is an impressive and quintessential Australian sight. Durras is only a few kilometres north of Batemans Bay and a walk in the National Park - there are some excellent shell middens and the eroded sandstone coastline is impressive - is well worth visiting. For more details check out https://www.aussietowns.com.au/town/durras-nsw

* The first European to sight the bay was Captain James Cook on April 22, 1770. He was dismissive of its potential believing the bay was too open to easterly winds to be of much practical use.

* The first Europeans to pass through the area were the survivors from the wreck of the Sydney Cove who reached the banks of the Clyde River on 16 April 1797.  Nine of them died in the Batemans Bay area. The remainder crossed the Clyde River in a canoe they found. Only three reached Sydney alive.

* Hearing the reports of the survivors, George Bass sailed south and on 14 December 1797, he entered Batemans Bay. He supported Cook's view that it was too exposed to function as a port.

* The bay was regularly visited during the 1820s and 1830s by timber cutters and fishermen who subsequently moved into the district.

* The settlement grew dramatically in the 1850s when, in 1853 James McCauley, a piloted a steamer up the Clyde River to Nelligen; the town was gazetted in 1854; and in 1856 a road from Nelligen to Braidwood meant the area was used by miners heading to the goldfields.

* A township was laid out at Batemans Bay in April 1859. In the same year a postal service to the town was established.

* Around 1860 the district began a thriving ship building industry while it also, as a result of oyster farming, established lime burning where the rich supply of oyster shells provided excellent limestone.

* 1868 saw the construction of the district's first timber mill which resulted in the production of finished timber in such quantities that steamers arrived at the town twice a week to carry goods to Sydney for sale.

* By 1869 the population of the town had reached around 60 people. This was enough to establish a provisional school with a public school being established in 1872.

* At this time there was no bridge across the Clyde. In 1871 a regular ferry service was established. It continued to operate until 1956.

* A police station was built in 1876 and a two-storey courthouse and police residence in 1885.

* The bridge across the Clyde River was built in 1956.

* By the 1960s, as public servants were moved from Sydney and Melbourne to Canberra, the town was being actively promoted as the nearest seaside location to the national capital and as a consequence the population grew dramatically. 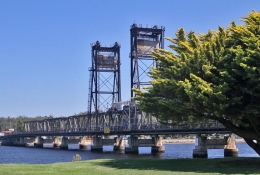 The bridge across the mouth of the Clyde River lies to the north of the town centre. 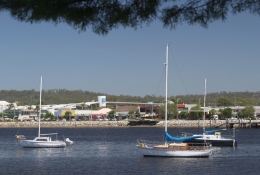 Looking across the Clyde River towards the town's main shopping centre. 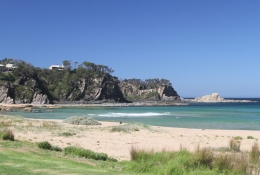 Malua Bay, south of Batemans Bay, and the location of the Batemans Bay Surf Lifesaving Club. How idyllic is this! 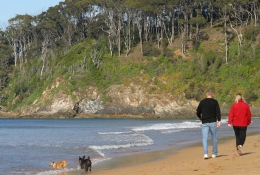 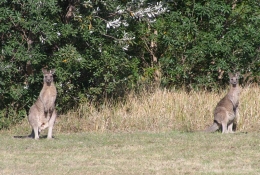 Kangaroos are common in the scrub behind Long Beach.